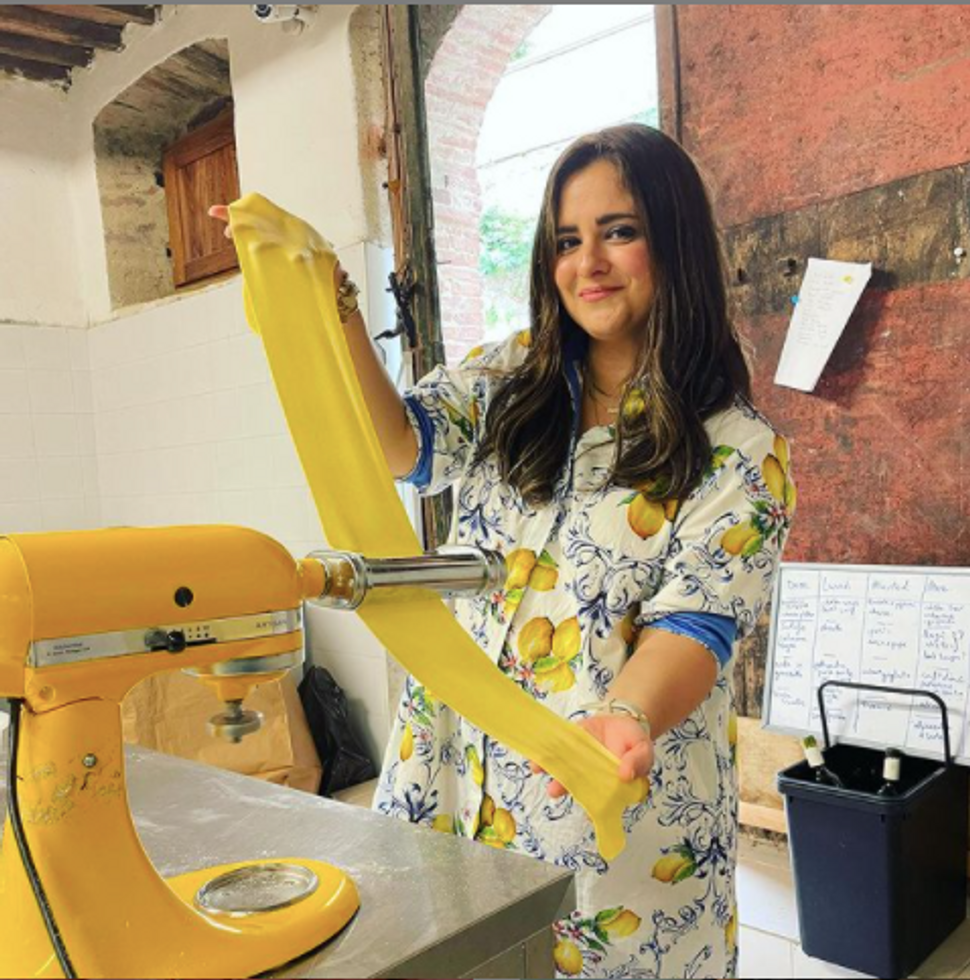 When Chanie Apfelbaum, founder of the Busy in Brooklyn kosher food blog, returned from a trip she made to Italy this summer, she brought back a new mantra: “Scale it back,” she said. “Tone it down.”

Apfelbaum, an observant Jew, lives in Brooklyn, has five children, a cookbook, “Millennial Kosher,” under her belt, another kosher cookbook on the way, and an active blog and Instagram site.

She planned the trip because her kids were away and she wanted to satisfy a lifelong dream, visiting Venice, Florence, Tuscany and Rome in six days — physically exhausting but mentally rejuvenating.

The trip, she said, was revelatory for a woman who grew up on kugel, stuffed cabbage and matzoh ball soup and whose food fame started with “drunken hasselback salami,” a dish that went viral 11 years ago. In it, Apfelbaum thinly slices a hunk of salami, mixes a sauce of apricot jam, brown sugar, brandy, brown mustard and ketchup and slathers it on the sliced meat. She then bakes it until it is brown and crisp. Sounds delicious but hardly an example of minimalism.

Never say never. But there is little question that her Italian tour opened her eyes to a new relationship with what and how she eats. She was struck by how respectfully Italians view and treat their food. Nobody throws it into a supermarket cart. Enter a grocery store and you will see beautifully displayed, locally sourced produce that is lovingly cared for by the shopkeeper. The customer knows not to touch it. That’s the grocer’s job. Tell him (or her) what you want and he will select it and pack it for you, as carefully as one would a jewel.

You feel the respect for food in its preparation, too, Apfelbaum said. At Cantina Giuliano in Tuscany, a kosher winery and farm-to-table restaurant, Apfelbaum was served half of a peach, freshly plucked from a tree, then roasted, topped with a crumble and served with almond cream—a study in simplicity.

Wherever she ate, she was struck by the food’s pared down preparation. The chefs used few condiments. French fries are served solo, without ketchup. There was no dipping sauce for the fried artichokes. Seasoning was often nothing more than salt and pepper. Even the salads come without dressing.

“They brought the salad to the table with a bottle of extra virgin olive oil, salt, pepper and a lemon,” she said. “Everything goes back to letting the ingredients shine.”

You won’t find much between-meals-grazing there either. 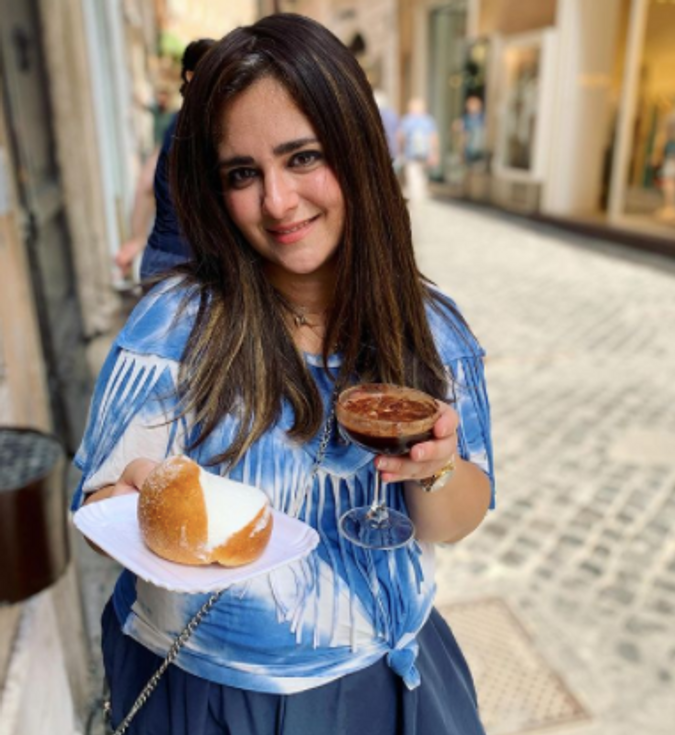 Apfelbaum with a pastry and shaken espresso for breakfast on the streets of Rome on July 7, 2021. Image by Screenshot from Instagram

“It is not,” she said, “a snacking culture.” There are few, if any, snacks sold in grocery stores. Nobody walks down the street eating pastries. When she was in Florence, and she asked the chef at Ruth’s Kosher Vegetarian restaurant for pizza-to-go, he said, “To go? Do you want a knife and fork? Are you going to eat that in the streets?”

It all goes back, said Apfelbaum, “to respecting the food. Sit at a table with a knife and fork. Honor the meal.”

Apfelbaum is an avid fan of Frank Prisinzano, an Italian American chef who shared his trip through Italy this year on his Instagram site. Apfelbaum is inspired by his passion for good food. It should be carefully seasoned and prepared using the proper technique.

For Rosh Hashanah this year, Apfelbaum will prepare a fish dish that she named “Branzino a la Frank.” It is a whole fish (Frank loves eating the whole fish), served with the head, but because it is the New Year, there will be no tail since Jewish lore holds that in the new year you want to be like the head and not the tail.

The dish is all about the ingredients: fresh fish on a bed of thinly sliced potatoes, roasted tomatoes, capers with parsley, olive oil and lemon. It is in a dish a distillation of what she saw, learned and ate on her trip.

She will serve, too, her traditional selection of different types of apples and honey. It is a highlight of her Rosh Hashanah meal and a course by itself, made of two unadulterated and delicious ingredients.