Washington, D.C.’s only kosher food truck is putting it in park.

The Schmaltz Bros food truck will soon be offering a blend of foods from different Jewish cultures at Hamakom, a kosher restaurant at the new Hillel space on George Washington University’s campus.

Yehuda Makla, 37, Schmaltz Bros co-owner, grew up in the Orthodox Jewish community in Silver Spring, Maryland. At his family’s dinner table it was normal, Malka said, to find matbucha, a spicy cooked tomato salad from his father’s Moroccan ancestry, and cholent and kishke from his mother’s Hungarian side. His parents’ Ashkenazi and Sephardic foods molded and defined Malka as a chef. And as a father, Malka passed on the love for his childhood foods to his four children.

After rabbinical school, mohel training (his dad was a mohel too), and yeshiva in Israel, Malka became an educator at a Jewish school in Maryland for seven years. Because teaching couldn’t pay the bills, Malka turned to his other passion, food, and opened a kosher food business.

Soon Malka crossed paths with Todd Gray of the upscale Equinox restaurant, where he spent the next two years learning the front and back of the house, outside the kosher world.

His subsequent work with Chappall Gage, owner of Susan Gage Caterers, evolved into a partnership. The co-owners launched Schmaltz Bros food truck and kosher catering in 2020 during the pandemic, when the restaurant industry was struggling.

Later this year, the duo will open Hamakom—”The Place” in Hebrew— for breakfast, lunch, and dinner. 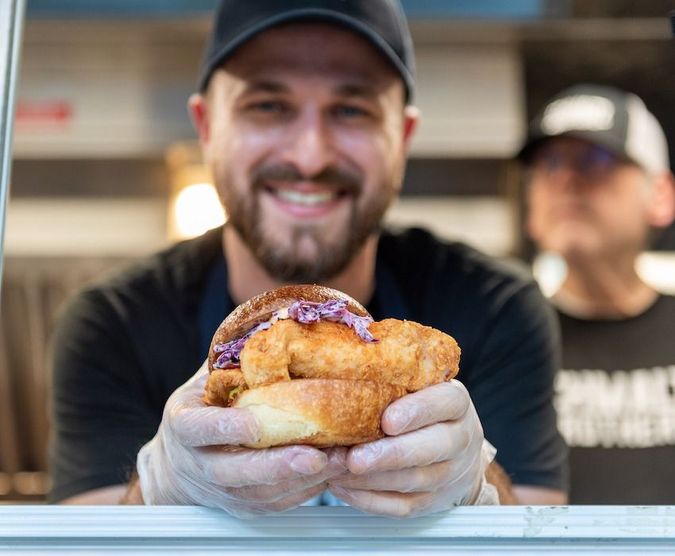 The Forward got a sneak-peek into the restaurant’s new menu and not- yet- open-to-the-public space.

Among the restaurant’s menu items are some of the truck’s biggest hits: The Zinger, Nashville hot chicken breast fried in schmaltz with wasabi slaw, secret sauce and pickles on a homemade challah bun; Cauliflower Shawarma with harissa marinade, served with charred green onion, chilies, mint, and lemon vinaigrette; and the Impossible Tracten-burger, a vegan burger referencing the former university president.

The Schmaltz Bros food truck will still make regular stops, announced on Instagram daily, at synagogues, JCCs, bars, and breweries in and around Washington.

These days, the truck features hickory-smoked, fork-tender, bubbie’s “been smoking” brisket with a cherry BBQ sauce and birria tacos, which are having a moment on social media.

For Chanukah, said Makla, stay tuned for his blended take on latkes.