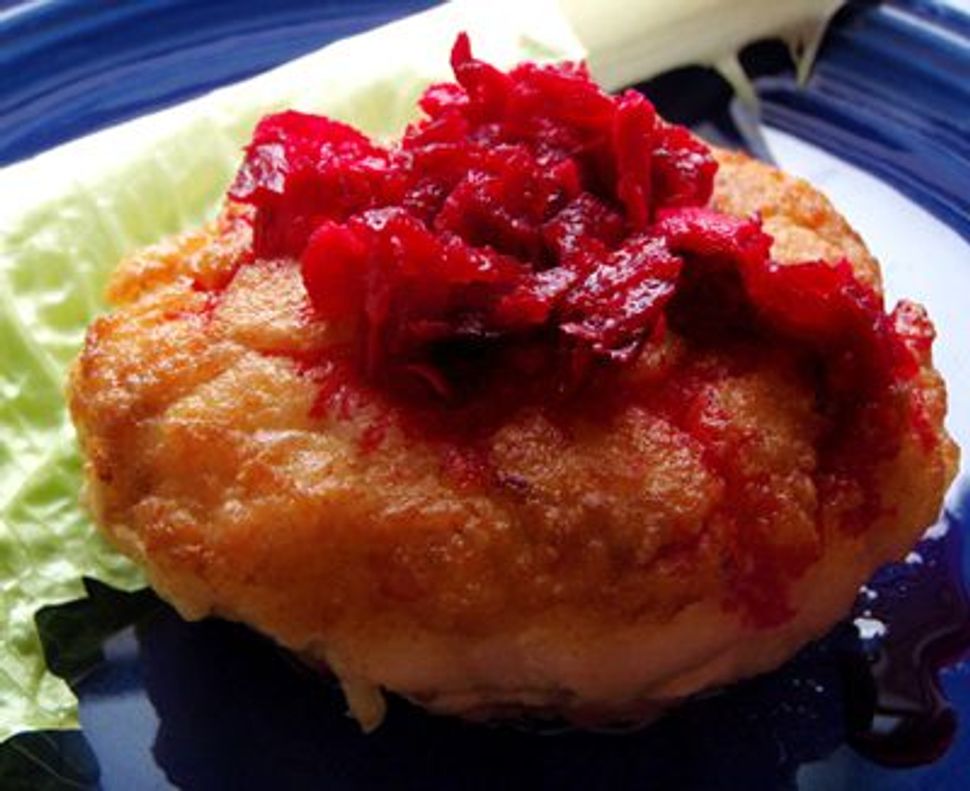 Across the Pond: Fried gefilte fish is popular among Jews in the U.K. Image by AARON KAGAN

Americans are notorious for consuming fried foods, including the recent trend of deep-frying the Thanksgiving turkey. Yet our affair with hot oil has never spilled over into the realm of gefilte fish, much to the chagrin of Jews across the Atlantic.

Fried gefilte fish might sound a bit unsettling to those familiar with the poached variety, but in the United Kingdom, frying is often the preferred preparation of this emblematic dish. In fact, fried gefilte fish is so popular with British Jews that many are shocked to learn not everyone else eats it that way.

“Is it that the fried version may not be usual in the USA?” wrote Eric Wilton, a London-area marketing consultant and gefilte fish aficionado, in an e-mail to the Forward. “It certainly is my favored variety!”

In researching this phenomenon, I spoke with many British Jews who, like Wilton, were passionate about the dish but had no idea that fried gefilte fish was endemic to the U.K. Some were even downright insulting about any gefilte fish that wasn’t cooked in oil. Yonatan Ariel, an educator and former resident of England who now lives in Israel, described boiled gefilte as “looking like cement” and the fried version as “looking like a latke,” making his bias quite apparent.

Rosemary Peters, an Edgware resident who works for the Association of Jewish Refugees in London, was equally blunt in her assessment of the situation. “Jews in the U.S. do not know what they are missing if they only eat the boiled version,” she said.

Peters also noted that fried gefilte fish is the easiest option when it comes to cooking. “It appears to me that the older generation tended to eat more of the boiled variety, perhaps because it required a good fish bone stock and people were happier then to spend time cooking,” she said.

To determine if fried gefilte fish is sold in the United States, I called the one source I thought would be most likely to carry it: Zabar’s. When I asked if the market offered this particular dish, the employee I spoke with answered without hesitation, saying “No, never,” as if I had spoken heresy. It was clear that if I was going to try fried gefilte fish, I would have to make it myself. With Passover just around the corner, there was no time like the present.

Like many American Jews, the only way I’d ever prepared gefilte fish involved twisting the lid off a jar. By making my own from scratch, I realized just how good the dish can be when assembled from fresh ingredients. I also learned that while I like gefilte fish, I love fried gefilte fish.

While the humble gefilte fish is known by some as the hot dog of the fish world, there is actually a fine line between it and the more gastronomically acceptable seafood terrine or pâté: All three are made from roughly the same stuff. Even within the Jewish community, gefilte fish is a love it or hate it food. I suggest, however, that skeptics try gefilte fish that is both homemade and fried. When enrobed in a thin crust, it transcends all stereotypes and is a great example of the marvelous things one can do with fish.

Your local fishmonger should be able to grind the fish for you, and if not, a food processor is a viable alternative. While you’re at it, make some homemade chrain. Everyone I spoke with, whether British or American, seemed to agree on one thing: Gefilte fish must be eaten with this sharp horseradish-and-vinegar condiment. And like the fish it accompanies, chrain is also easy to make at home and much better than the jarred equivalent.

There may be regional differences between British and American Jews, but fried gefilte fish should not be one of them. And it’s certainly no stranger than a deep-fried turkey.

1) Grate the onion and combine it with the fish, egg, pepper and salt, and 3 tablespoons of the matzo meal.

2) Form the mixture into small balls, each about the size of a lemon. Roll each of these in the remaining matzo meal, creating an even coating.

3) Fill a pan with sufficient oil for frying, about ¼-inch deep. Set over a medium-high flame. When a sprinkling of matzo meal sizzles in the oil, add as many patties as will fit without crowding the pan.

4) Fry for 2 minutes on each side, at which point patties should be crisp and golden brown. Check that the fish is cooked all the way through (the center should be white rather than translucent). If not cooked through, continue cooking on lower heat.

1) Peel the horseradish and the beet.

2) Either by hand or in a food processor, grate equal parts horseradish root and beet, combine with the remaining ingredients and let sit for at least 15 minutes.