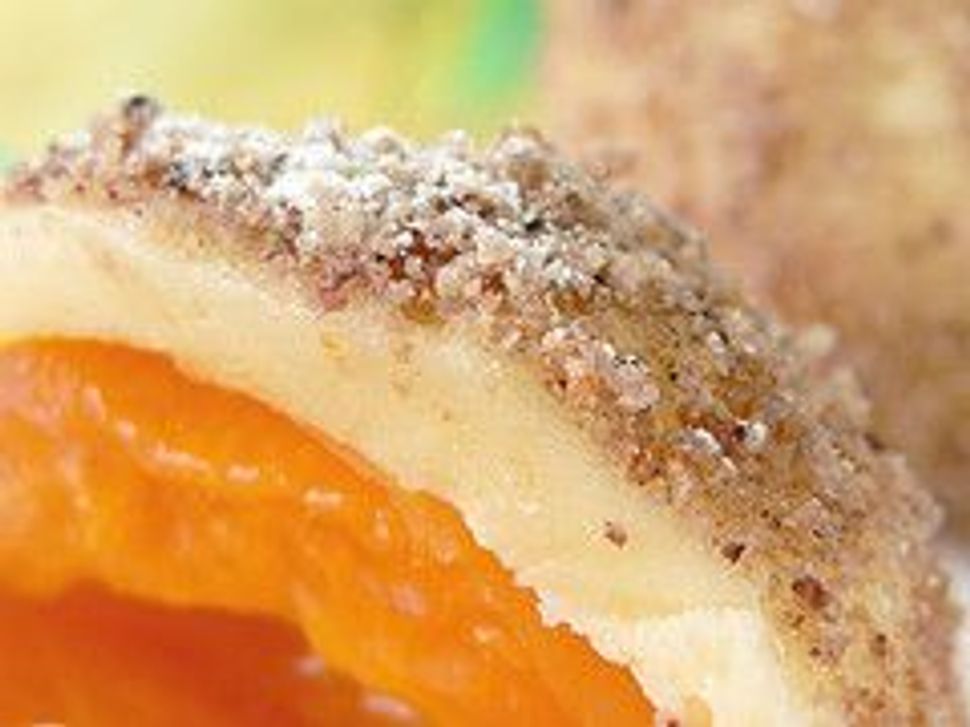 Like my dad, my childhood is also dotted with memories of Millie’s fruit dumplings. They’re the only dish I can remember any of my grandparents preparing for me. When I was little, my parents and I would fly from Oregon to visit my dad’s family in Illinois. Grandma Millie would typically whip up at least one batch during our visit. She’d bring containers of the still-warm dumplings to my aunt and uncle’s house, where they didn’t last long. I couldn’t tell you what we talked about as we dove into the warm peach-, plum- and nectarine-stuffed dumplings. Instead, most of what I remember revolves around the melted butter and cinnamon sugar slathered on top of the chewy dumpling shell, and the plump, cooked fruit inside it.

I recently learned that these dumplings are a popular Czech Sukkot recipe, after all, the dish puts fresh, seasonal fruit on full display and it is a “stuffed dish,” which is common on Sukkot. The thing is, Grandma Millie wasn’t Jewish, and in fact was a devoted church-goer. That said, her Czech parents’ last names, Lev and Majer, led her to openly surmise that perhaps her ancestors were Jewish. So I’d like to think it’s not too much of a stretch to imagine that some Jewish Czech relative of mine and Millie’s once made this recipe in celebration of the fall harvest.

Whether or not Grandma Millie was actually Jewish, she flew across the country at the age of 88 to attend my Bat Mitzvah. It was then that I learned that not only could she make a mean fruit dumpling, but she could tear up the dance floor, too.

Chef’s note: The amount of fruit will depend greatly on the size of the peaches, nectarines and plums. I used unusually large peaches and plums, and the recipe yielded 8 (very large) dumplings.

1) Wash fruit well, checking for stems, and dry carefully. In a large bowl, mix the cottage cheese, sugar, salt and uncooked Farina (or cream of wheat).

2) Add the softened butter and beaten eggs and mix thoroughly. Gradually add flour to form a dough that can be worked around the fruit.

3) Tear away a piece of dough and roll it in the palms of your hands to form a ball. The dough will be quite sticky, so keep your hands coated in flour throughout the process. It also helps to keep a thin layer of flour on the surface you’re working on.

4) Pat dough flat to about 1/4 to 3/8 inch thick and large enough to wrap around a piece of fruit. Place fruit in the center of dough and bring dough together, pinching and sealing edges well to avoid any open seams, holes or thin spots.

5) When you have about 6 to 8 fruit dumplings ready, place dumplings into a large pot of boiling water. Lower gently with a slotted spoon, making sure they aren’t crowded. Boil gently for at least 20 minutes, longer depending on size of fruit. Stir occasionally to avoid sticking to bottom of pan. Gradually, dumplings will rise and swell in size.

6) Remove dumplings with slotted spoon, and add remainder of prepared dumplings into boiling water. (More water may have to be added to cover dumplings).

7) Serve dumplings warm, spread with melted butter and sprinkled with cinnamon sugar Cottage cheese or crème fraiche on the side make a nice accompaniment.