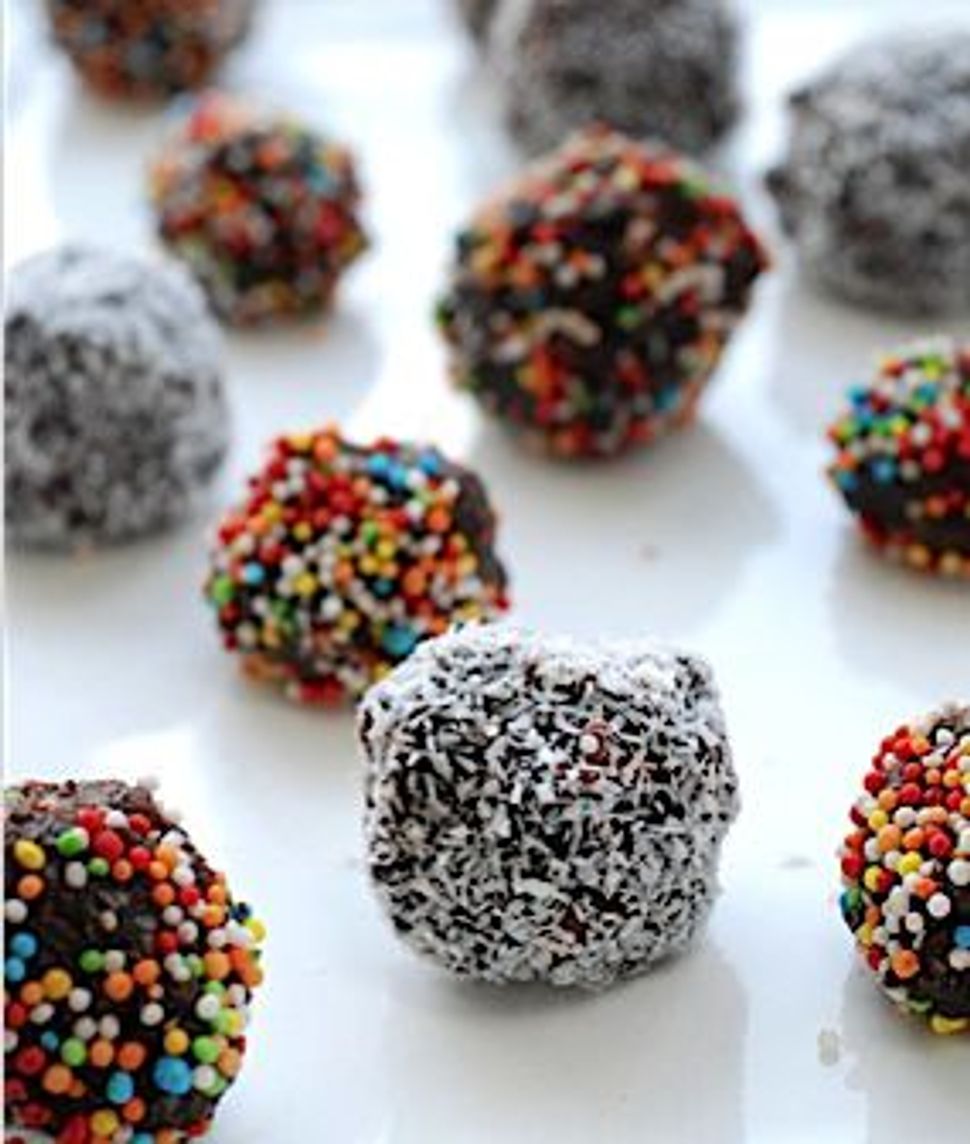 Chocolate balls are as iconic as falafel in Israel, yet most tourists have never heard of them. After all, nobody is hawking these colorful confections on street corners. Kadorei shokolad, as they are known in Hebrew, are part of the quintessential Israeli childhood but they’re rarely seen outside the home. They might be ignored by culinary aficionados but insiders know that the very best are made by enthusiastic kindergarteners.

It’s a one bowl wonder, made with cocoa, sugar, milk and biscuits, all mashed together into a dark brown goop. Preschoolers are usually relegated to bashing the biscuits with a rolling pin, a job they do with gleeful abandon. Little lopsided balls of the mixture are rolled into shredded coconut or colored candies and placed on a serving tray to set or popped straight into their mouths. It’s a plebian version of Belgium truffles.

My Mother-in-law, Yehudit Melamed, from Rishon Le Zion in central Israel, first started making kadorei shokolad with her mother in the 1950’s. When and who invented these treats may be lost in history but it is Ruth Sirkis, the Julia Child of Israeli cooking, who is often credited as having popularized this classic dessert. Her recipe was first published in 1975 in “Children Are Cooking” (Yeladim Mevashlim). With its quirky hand drawn pictures, her cookbook spans more than two generations and continues to be sold at the local bookstores.

Although Sirkis doesn’t specify the type of biscuit to use, most Israelis reach for Osem’s Petit Beurre brand. Despite its imaginative name (today this would be called false marketing) it contains no butter nor anyway resembles its French counterpart. Yet Israelis bought it because there were no other options at a time when butter was expensive or unavailable. A bit of culinary innovation transformed these cardboard biscuits into a myriad of imitation deserts including petits fours, multi-layered cakes and everybody’s favorite poor man’s truffle. Israelis, a nostalgic people, would never consider replacing their beloved Petite Beurre with a superior alternative.

Kadorei shokolad are as popular as ever despite the enormous changes in the Israeli food scene. Its appeal lies in its simplicity; a dessert that is fast, no-bake and inexpensive. Kadorei shokolad has none of the fastidiousness found in gourmet sweets and can be tweaked and improvised according to what is available. Rum and candied nuts can be added for a more sophisticated twist, while leftover cookies that have gone stale can also be incorporated in the batter. It’s a humble dessert reserved for informal affairs. For Israelis it tastes of home, birthday parties, picnics and childhood. Indeed, it’s more than just a favorite recipe; kadorei shokolad has become part of Israel’s collective memory.

This recipe is adopted from Ruth Sirkis’s “Children Are Cooking” cookbook.

1) Put the biscuits in a plastic or paper bag and close tightly. Using a rolling pin or meat tenderizer crush or pound the biscuits until the biscuits have the consistency of rice.

2) Pour the biscuits into a large bowl. Add the sugar, cocoa and the cinnamon and mix well. Add the vanilla, softened butter, milk and stir until the batter comes together. If the mixture doesn’t bind, add another tablespoon of milk.

3) Take a tablespoon of the batter and roll it between the hands to form a ball.

4) Coat these balls in either coconut or colored candies by rolling them from side to side. Place on a serving tray.