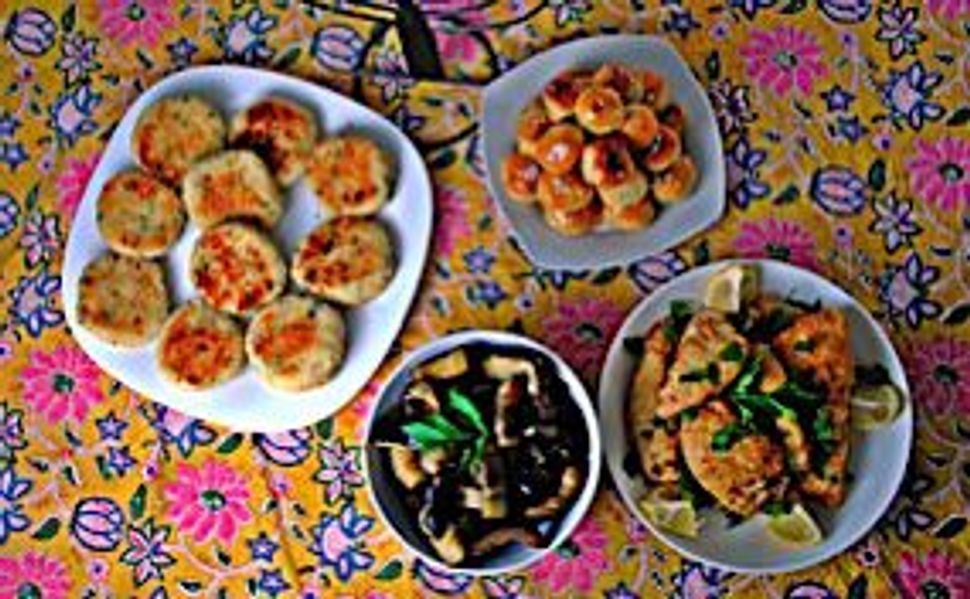 Like Jews around the world, Italian Jews, who make up one of the oldest Jewish communities, mark Hanukkah with a fried feast, but with their own spin. Holiday tables are covered with with dishes like fried chicken, mashed potato pancakes, olive oil fried eggplant and honey-soaked dough fritters.

Italian Jewish cuisine traditionally varies greatly by region and even community. However, some Hanukkah foods, like Pollo Fritto per Chanuka, or simple fried chicken seems to have almost universal appeal. Now, get those images of the heavy Southern American version out of your head. This rendition is marinated in olive oil, lemon juice, nutmeg, and garlic before being dredged in flour and egg (in that order) and fried. The marinade keeps the chicken moist and flavorful while the outside crisps in the hot oil.

And while Italians don’t do latkes in the Ashkenazi sense, that doesn’t mean they don’t have potato pancakes. Unlike latkes, Fritelle di Patate, are formed from seasoned mashed potatoes, coated in breadcrumbs, and — of course — fried. They are comfort food at its best, with a crispy exterior and creamy, starchy middle.

Hanukkah’s emphasis on oil is a natural marriage with Italian Jewish cuisine. Claudia Roden points out in “The Book of Jewish Food,” that Roman Jews in particular popularized frying vegetables in the region. “Although eating fried foods was considered a little vulgar,” says Roden, “it is now very fashionable, and restaurants specialize in fried vegetables, which are featured as ‘Jewish Style.’”

Rome’s historic Jewish ghetto is famous for it’s Carciofi alla Giudia, or Jewish Style Artichokes, though equally, if not more traditional is Melanzane alla Giudia, or the Jewish Style Eggplant in this menu. Italian Jews were responsible for introducing eggplant, among other present day staples of Italian cuisine, to the national diet. Pellegrino Artusi, in his 1891 “La Scienza in Cucina e l’arte di Mangier Bene” (Science in the Kitchen and the Art of Eating Well), points out that prior to the mid nineteenth century “One hardly saw eggplants or fennel in the markets of Florence; they were considered to be vile because they were foods eaten by Jews.”

In this eggplant dish, the seeds and most of the flesh are removed from the vegetable before being fried in plenty of olive oil and garlic. The dish is simple, straightforward and delicious.

Italian Hanukkah meals are finished off with sweet fried dough fritters. In “Classic Italian Jewish Cooking,” Edda Servi Machlin describes Fritelle de Chanuka as “diamond-shaped pieces of bread dough with anise seeds and raisins inside which, after frying, were coated with hot honey.” The precipizi I bring you here are similar in nature, but without the anise seeds and raisins (they also bear a striking resemblance to Struffoli, an Italian Christmas confection). Whatever they are, they bring a sweet end to a festive holiday meal. Chag Sameach!

1) Mix the olive oil, lemon juice, nutmeg, and garlic in a large bowl. Add the chicken and turn to coat. Marinate, covered, for at least an hour or overnight in the refrigerator.

2) Dip each piece of chicken first in the flour, then in the egg.

3) Heat the vegetable oil in a large, heavy duty pan over medium-high until hot.

4) Add the chicken, working in batches if necessary (do not crowd the pan), and fry until golden brown on both sides and cooked through.

5) Transfer to a paper towel-lined plate and keep warm in a 200F oven if not serving immediately.

6) Serve with lemon wedges and garnish with chopped parsley.

*Note: Although Pollo Fritto is traditionally prepared with pieces from a whole chicken, I tried to lighten the meal ever so slightly by using chicken breast cut into finger-friendly tenders.

1) Put the potatoes in a large pot of cold water over medium-high heat and bring to a boil. Lower the heat slightly and simmer until potatoes are softened.

2) Drain the potatoes and mash with a potato masher or wooden spoon. Allow to cool slightly.

3) Put the potatoes in a large bowl and add the egg, onion, parsley, and ¼ cup of the breadcrumbs. Mix until well combined. Season generously with salt and pepper.

4) Form the potato mixture into patties about 2½-inches wide and ½-inch thick.

5) Put the remaining breadcrumbs on a plate. Coat the potato patties in breadcrumbs.

6) Heat the vegetable oil in a heavy-bottomed pan over high heat. When the oil is very hot but not smoking, add the potato pancakes. Do not crowd the pan and work in batches as necessary.

7) Fry, flipping once, until golden brown on both sides.

8) Transfer to a paper towel-lined plate and keep warm in a 200F oven if not serving immediately.

2) Heat the olive oil in a large pan over medium heat and add the garlic. Cook for a few minutes until lightly browned (do not burn).

3) Add the eggplant and stir to coat in oil. Cook, partially covered and stirring often, until tender and cooked through, about 15 minutes.

1) Mix together the eggs, flour, sugar, olive oil, and rum and lightly knead until you get a smooth, soft dough.

2) Shape into small balls about the size of olives.

3) Heat the vegetable oil in a large pan over high heat.

4) Add the dough balls and fry until golden on all sides, working in batches if necessary. Transfer to a paper towel-lined plate.

5) When the dough balls have all finished cooking, wipe the pan clean with a paper towel and add the honey.

6) When the honey is hot, add the dough balls back into the pan and stir to coat.

7) Pour onto a baking sheet and allow to cool.

8) Here most instructions say to put them close together and cut them into rectangles, but I prefer to keep them as is. As they cool the honey will harden slightly.

9) To serve, arrange however you like and top with powdered sugar, if you wish.