The Tastes of a Kurdish Hanukkah 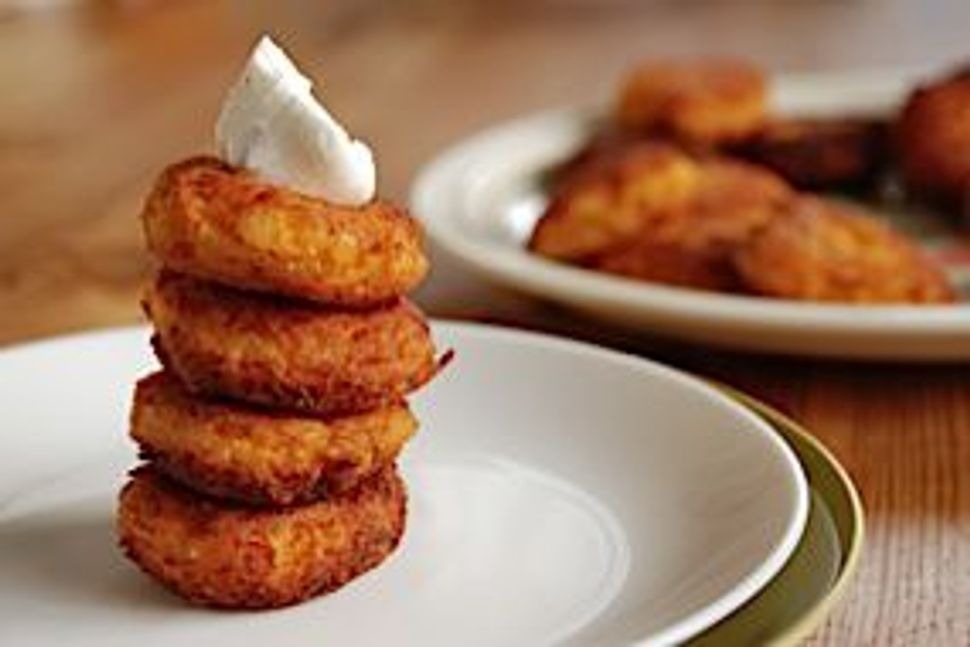 On Agripas Street in Jerusalem, between the workers’ diners and the outdoor market, there is a Kurdish Cultural center. With a dwindling number of native born Kurds, each year their legacy slowly declines. Many of their descendents have naturally assimilated into Israeli culture and no longer keep the traditions of my family’s ancestors.

Sadly, the language, dress, music, folklore….the entire way of life of my ancestors is now almost exclusively confined to the pages of academic research. Food is often the last vestige of a bygone era to survive. It is what differentiates one ethnic group from another and it is also what binds them.

As families gather to light the Hanukkah candles, tradition is illuminated yet it is the flavors and scents that are etched in my memory. My most memorable Hanukkah donut was on a humid day in July at my grandmother’s tiny Jaffa apartment (I asked, she obliged). The dough was treated to an afternoon siesta, cozy beneath colorful quilts as I impatiently waited for it to rise. Although there is something a tad anachronistic about sufganiot in the heat of the summer, by that time, I had no other option. My family had already moved to the United States and our brief visit to Israel was the only occasion I had to indulge in winter’s quintessential treats.

While these are an integral part of Hanukkah festivities, Kurdish Jews also prepare zeloubiyeh karmeyasa, a yeast pastry reminiscent of sambusac. It is filled with dates or ground nuts, and like all Hanukkah favorites, is dunked into sizzling oil until golden. For those who prefer savory, the potato is the star the holiday menu, yet there are a myriad of other vegetables that can be fried. Potatoes were not always available in Iraqi Kurdistan so the locals would substitute carrots for a sweeter and more colorful fritter, sometimes embellishing them with chopped celery or parsley leaves. Cookbook author Varda Shilo, recalls her family would stock up on this favorite root on trips to Mosul and used them to make latkes (orejet patateh in Aramaic) stuffed with caramelized onions.

While these foods still survive into the younger generation other customs have disappeared. The Kurdish community once gathered firewood to celebrate Korma Bikeh, a festivity similar to Log Ba’omer. On the last day of Hanukkah, when a full eight candles sparkled in the night, a large bon fire would be lit in the court yard. This was not to cook the family meal but for an almost voodoo like ceremony. Using sticks and rags, children would construct a small doll which represented infamous Antiochus, the leader of the Seleucids and persecutor of the Jews. When the fire reached its apex they would rip off the cloth beard and throw it into the flames while singing “Antiochus! Antiochus!” The adults, meanwhile, would burn the remaining Hanukkiah wicks and say “The small candles of the Jews is a sign of the coming of winter.”

This Hanukkah will be my grandmother’s sixtieth year since she has moved to Israel from her mountainous home in Iraqi Kurdistan. To this day she still uses oil to light the Hanukkiah, just as it was done from antiquity.

Although my grandmother didn’t prepare carrots fritters exclusively for Hanukkah, it has become a regular at my holiday table. Carrots are in season during the Israeli winter and are at their most flavorful, without the bitterness which can sometimes accompany them.

1) In a bowl, mix all the ingredients together until it comes together.

2) Using your hands, form about fifteen flat, round, fritters (about 1 cm thick).

3) Heat enough oil in a pan so that it comes half way up the fritters and fry until they are golden brown, flipping once. Remove on to paper towels to absorb excess oil.

4) Serve with labneh or yogurt. Variations: Ground coriander goes well with carrot fritters, either in the mixture or added in the labneh, try adding a variety of herbs such as parley and thyme.

The Tastes of a Kurdish Hanukkah