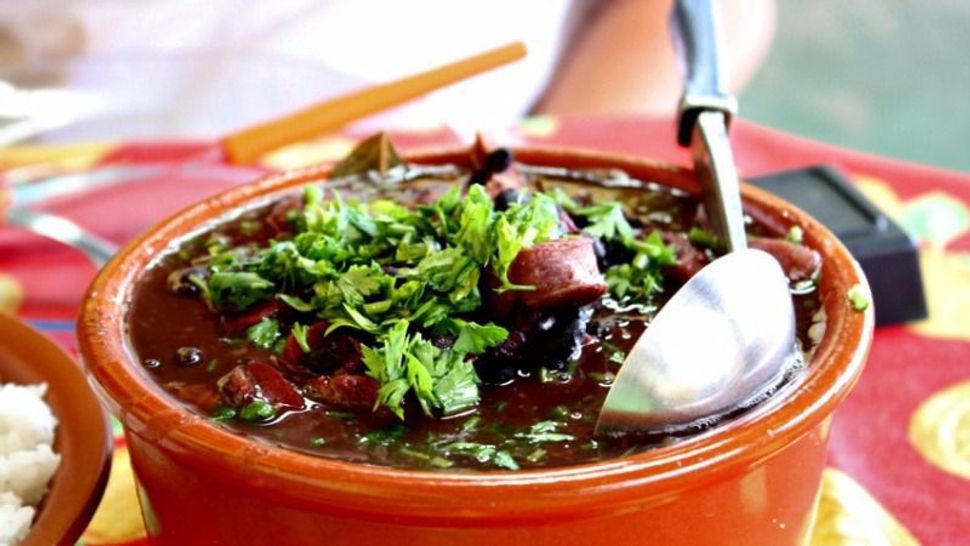 Made with a variety of kosher meats, this version isn’t as heavy as the pork-laden original, but the taste is as Brazilian as samba. Image by Flickr

Feijoada, one of Brazilian’s national dishes, is adored by rich and poor alike.

It’s soul food: black beans and many kinds of pork meat stewed together in one pungent, satisfying dish. When I lived in Rio de Janeiro as a teenager, my mother’s cook would sometimes concoct a kosher rendition for us on a Sunday, or when my parents entertained visitors from abroad. Made with a variety of fresh, dried and smoked kosher meats, it was never as heavy and fatty as the pork-laden original, but the taste was as Brazilian as samba.

Legend has it that feijoada was invented by 16th century slaves in the north of Brazil. According to this story, African kitchen slaves in the vast sugar plantations and mining estates of colonial Brazil were allowed to take offal — pork ears, tails, trotters, and organs — back to the slave compounds. There they enriched their daily beans and manioc gruel with these meats rejected by their Portuguese masters. Sniffing regretfully at the delicious smells wafting from the big communal pots, their slave masters, eventually tasted and adopted the slaves’ mess of beans and meat.

Well, it’s a nice story, but it’s not true. To begin with, many African slaves were Yoroba Muslim and wouldn’t have touched pork. And according to Luis de Câmera Cascudo, folklorist and Brazilian cookbook author, high society at the time appreciated offal and considered it as good as any other meat, so it is unlikely that slaves would have had access to it. According to Câmera Cascudo, feijoada only came into its own in the mid 1800s. Influenced by slow-cooked European white bean and meat stews such as French cassoulet and Portuguese cozido, a few restaurants in Rio de Janeiro adapted these stews to local ingredients. It didn’t take long for the dish to spread to the rest of the country, recipes varying slightly with local tastes.

It’s a festive dish. Families and friends often gather on Saturday afternoons to enjoy it. The leisurely lunch is washed down with ice-cold caipirinhas or beer. Classic side dishes are white rice, farofa (a moist garnish of pan-toasted manioc flour), chopped collard greens, and sliced oranges. Following dessert, everyone rolls off for a long nap. (This will sound familiar to anyone used to the soporific Shabbat cholent.)

Traditionally, feijoada calls for 3 to 7 types of fat or smoked meat, mostly pork. Ears, tail, tongue are all there, as well as salt-dried beef, sausages and bacon. Some recipes call for a shot glass of cachaça to be stirred in, and an entire quartered orange, to cut the grease.

While you may fancy stirring an earthenware pot over a wood fire, as the dish was traditionally prepared, today’s feijoada is often made in a pressure cooker. I prefer the open-pot method, using a big cast-iron Dutch oven, but any pot big enough to contain the ingredients works well.

Traditional feijoada is a basic stew with little flavoring help from spices and herbs, relying on the rich, fatty flavor of pork and a little onion and garlic. A kosher version must be more flexible to gain rich flavor, so I’ve added non-traditional cumin, tomato, and coriander leaves to round it out. Brazil’s food historians say that feijoada is a dish that’s still evolving, but I imagine that few, if any, predicted the development of a porkless version. Yet as I remember feijoada on a hot evening in Rio, with family and friends digging into the all-kosher black beans and meat, cold drinks at hand and the sing-song murmur of Portuguese in my ears, it was very, very good.

1) Soak the beans overnight, but do not drain them when they’re done. Put them in a large pot with all their soaking water and 2 tablespoons olive oil. Add the bay leaves.

2) Add the sliced shin meat. Add more water to cover an inch over the beans and meat.

3) Bring to a boil and then lower to a simmer for 1 to 1-1/2 hours, covered, till the beans and meat are tender. Do not add salt, but add boiling water to keep the stew covered at all times. Note: the beans and meat should not be floating in water, but should be thick by the time they’re done. .

4) Remove two ladles full of beans to a bowl. Mash them to a thick paste with a potato masher and set aside, covered.

5) Check water to ensure that the feijoada doesn’t dry out. Test the beef for tenderness. When it is quite tender, remove the pieces to a platter and set aside. Add sausages to the pot and cook for another 30 minutes.

6) In a frying pan, fry the chopped onion in the 1/4 cup olive oil till golden. Add the tomato and garlic; cook another 5 over medium heat. Add the cumin and cayenne and mix well. Add the mashed beans from the bowl set aside previously and incorporate all very well, cooking and stirring for another few minutes.

7) Taste for salt at this point, adding more little by little and keeping it somewhat under-salted. Remove the sausages to the same platter the beef is in. (if the meat is left in too long it will break down)

9) Add the chopped coriander leaves, stir in well, and cook another 5 minutes. The feijoada should be thick and glossy when stirred.

10) Replace the beef and sausages in the cooking pot and heat through.

You may either remove the hot meat to serve separately or serve meat and beans together in a big serving bowl (or in their cooking pot). In any case, serve with white rice, sliced oranges, and collard greens, kale, or even Swiss chard, chopped, sautéed briefly in olive oil and sprinkled with salt. Lacking manioc flour for farofa, a good French bread is fine for mopping up the delicious, saucy beans.