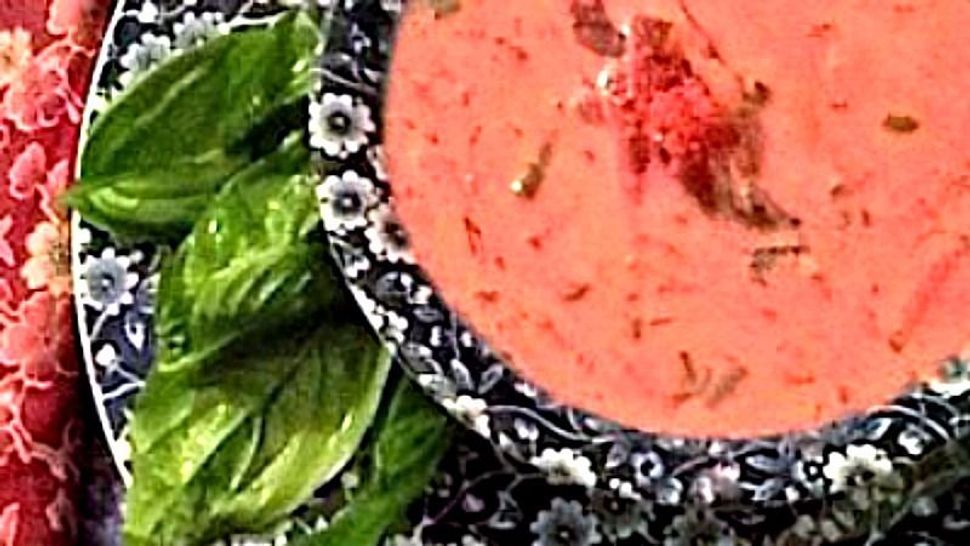 There I was, like a character out of a Nora Ephron film, standing in the middle of Zabar’s, asking anyone within earshot the difference between their two beet soups. The bustling Manhattan store’s two versions of borscht boast the same color, almost the same ingredients. Scrutinizing the two containers, I hold them up to the sage pastrami-slicer behind the deli counter, asking him how the two vary. Can I eat either cold? He shrugs, smiles and nods.

A few days later, shopping at my favorite Eastern European food emporium, M & I International in Brighton Beach, I spy a big pot of ruby-red borcsht labeled red borscht. But when I say want to eat it cold, the woman immediately turns her back and strides over to the fridge, pointing to another pot covered with plastic wrap. As I pay $6 for the tall tub of pink soup, the friendly Russian explains with great urgency that the cold version boasts sour cream and yogurt and should never ever be heated. If you enjoy pairing cold borscht with bread, buy or bake dark, old-world, farmer’s rye.

The pleasant dilemma is that there are as many versions of cold borscht as there are countries in the Olympics. Even the name and spelling changes with its place of origin depending on whether you’re concocting Latvian, Lithuanian, Ukrainian, Polish, Russian or Belarusian borscht.

From the vibrant cacophony of voices, some rules for cold borscht are rigid, like “No meat. No Potatoes.” The rest as variable as your CSA bounty. The borscht loving world encompasses most eastern and central European countries. Of the rainbow of beets grown, red ones are most commonly used to make borscht, but if your farmer is harvesting striped beets, give them a try (especially if you don’t mind more muted colors).

Traditionally, dill is the fresh herbal garnish, but if you’re swimming in fragrant basil or parsley, as many of us are in August, no reason not to sprinkle some over the soup. Garnishes are like jewelry; add as many as you want. I personally adore hard boiled eggs, coarsely chopped and mixed into a bowl of chilled borscht. Some cooks say scallions make perfect soup, others claim radishes provide the crunchy contrast. And don’t skimp on black pepper (or horseradish), as pungency is key.

Some recipes call for both lemon juice and vinegar, other cooks prefer one or none. Should you opt for wine vinegar or up the ante with Champagne vinegar? Feel free to buy an expensive, esoteric bottle if you want to impress your brood; or go with whatever is on hand. As we celebrate the late cookbook author, TV personality Julia Child’s birthday tomorrow, remember that this wise woman insisted you should always cook with the best bottle of wine (or vinegar) you can afford.

Think seasonally. If local farms are growing Kirby cucumbers, definitely toss those in and try not to peel the cukes entirely, so the soup is as green as possible. English, Armenian or Persian cucumbers can also be used.

Hot borscht often includes vegetables like carrots, potatoes, onions and meat, and an elderly Jewish grandmother I know calls it “a juicy start to a meal.” Others say it is the entire meal. Cold borscht, albeit lighter, also translates into a totally satisfying, summer-time dinner.

1) Place the well-washed beets in a large pot of boiling salted water; make sure the water covers the beets. Cook uncovered until the beets are tender, about 40 minutes. Remove the beets, place in a bowl and set aside to cool. Peel the beets and grate.

2) Strain the cooking liquid through a sieve and set aside to cool.

3) In a large bowl, mix together 2 cups of the beet cooking liquid, the stock, lemon juice, vinegar, 2 teaspoons of salt, and the pepper. Cover with plastic wrap and chill for a few hours.

4) When ready to serve, divide the grated beets into four empty bowls. Also divide the cucumber, radishes, dill and hard boiled eggs into the bowls. Pour the liquid into the bowls and mix each one separately. Season to taste and serve cold with a dollop or more of sour cream and an extra sprig of fresh dill.