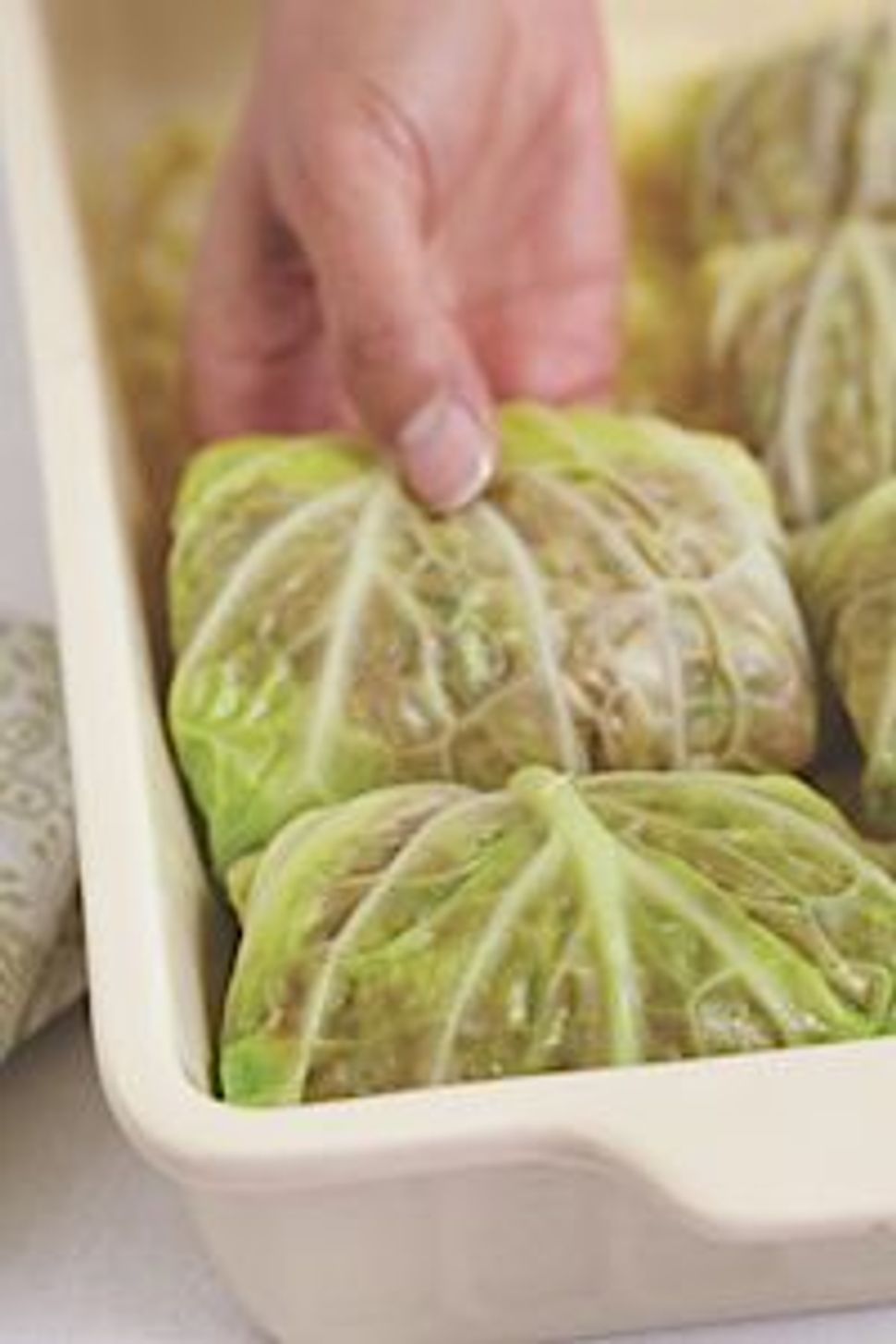 Along with making my own pastrami, I was excited to test Cabbage Rolls in Tomato Sauce (though I know them as stuffed cabbage) from Nick Zukin and Michael C. Zusman’s “The Artisan Jewish Deli at Home”.

This is a dish I grew up on; my Russian-born grandma made it all the time. And when I thought about it, given that she died in 2002, and stopped cooking much before that, and my mom never made it, I realized I probably hadn’t eaten it in over 20 years.

Ground beef is mixed with onion, barely-cooked white rice, garlic, parsley, raisins and eggs, and rolled into blanched cabbage leaves, and then baked in a tomato sauce.

The amount of brown sugar in the tomato sauce had me guessing that I would find the dish too sweet, and I did. However, biting into it provided such a sense of nostalgia for my Babushka’s cooking that I could overlook it, especially since this is how the dish is traditionally made.

“I can see why my ancestors would have made this,” said Sam, one of our friends who tasted the dish at a Shabbat dinner at our house. Unlike the Reubens, she felt this was much healthier and more balanced. She felt it was solid, get-you-through-the-winter kind of food.

Our other guest Adam appreciated that for Jewish food, it was low on carbohydrates, and didn’t have to be smashed between two pieces of bread. Additionally, he happens to love cabbage. “I think cabbage gets a bad rap,” he said.

He too thought the sauce was too sweet, and would have preferred taking it into a more savory direction, perhaps with some Worcestershire sauce.

Sweet sauce aside, when we returned home to stuffed cabbage leftovers a few days later, having this nourishing food awaiting me was a mechaya (joy). As someone who hasn’t tasted her mother or grandmother’s cooking in so long, I truly felt I was eating a dish made by my grandma, and for that alone, it was worth it.

Would You Make This? All of us: yes, with a less sweet sauce.

Cabbage rolls, also known as stuffed cabbage or in Yiddish as prakes, are an old-time Jewish deli favorite that, sadly, are seldom seen except on the most traditionalist menus. Variations of moist-heat-softened cabbage leaves rolled around meat and grain have roots going back millennia. The dish lends itself superbly to home cooking; day-old leftovers taste even better than the freshly made rolls. As with so many traditional dishes enjoyed by the Ashkenazis and other impecunious populations, this one begins with cheap and abundant cabbage and makes a little ground beef go a long way with the addition of rice, onion, eggs, and raisins. The paprika adds a piquant Hungarian accent to the ensemble.

To make the cabbage rolls, preheat the oven to 325°F. Fill a large pot two-thirds full of water, season it generously with salt, and bring it to a boil over high heat. Line a rimmed baking sheet with a clean kitchen towel.

Core the cabbage and carefully lower it into the boiling water. Boil the cabbage, covered, until the outer leaves are tender, about 5 minutes. Using tongs, begin peeling away the outermost leaves from the cabbage as they are cooked, and transfer them to the baking sheet. Continue cooking the cabbage until all of the leaves that are large enough to fill have been removed. You should have about 12 leaves. Remove the center of the cabbage from the water and thinly slice it, discarding any remnants of the core. Scatter the sliced cabbage in the bottom of a large, shallow baking dish (a 10 by 15-inch glass dish is ideal). Remove the large, white center ribs from the whole cabbage leaves. Set the cabbage aside to cool while you prepare the filling.

Cook the rice in a small pan of salted boiling water for 3 minutes; drain well. In a large bowl, mix together the beef, onion, raisins, eggs, parsley, garlic, pepper, and 1 tablespoon plus 1 teaspoon of salt. Stir in the rice.

Working with one cabbage leaf at a time, fill each leaf with about ⅓ cup (¼ cup for smaller leaves) of the meat mixture. Place the meat toward the tip of the leaf, opposite the core end. Fold the sides over the filling and roll it up to completely encase the filling. Arrange the cabbage rolls in the baking dish, seam side down.

To make the sauce, heat the oil in a large saucepan over medium-high heat. Add the onion and cook, stirring occasionally, until golden brown, 8 to 10 minutes. Stir in the brown sugar until it is dissolved. Pour in the wine and cook, stirring occasionally, until it is almost completely evaporated, 3 to 5 minutes. Add the tomatoes, salt, paprika, and lemon juice and bring the mixture to a boil. Lower the heat to medium, and simmer for 5 minutes.

From “The Artisan Jewish Deli at Home” by Nick Zukin and Michael Zusman/Andrews McMeel Publishing, LLC