The Art of Couscous 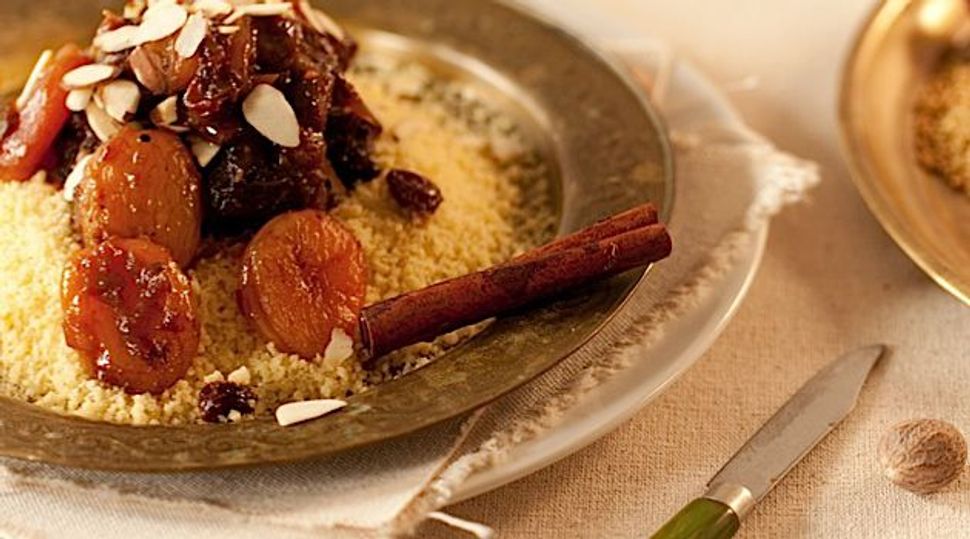 ‘For most people, you eat a hamantaschen on Purim and that’s that,” said Leetal Arazi. “We want to do something more.” Along with her husband Ron Arazi, Leetal runs NYShuk, an artisanal food company focusing on Sephardic and Middle Eastern Jewish cuisines. And this Purim they’re planning a Moroccan feast with the Brooklyn-based Crow Hill Supper Club.

The star of the dinner will be hand-rolled and steamed semolina couscous served with hot milk and butter, just as Ron’s Moroccan family ate it when he was growing up in Israel. “The dish was typically eaten on Purim day,” he said. They will also serve a variety of fresh salads and the spicy fish dish, chraimi, alongside loaves of bread shaped liked the face of Haman, the Purim story’s villain. “You bake two eggs directly into the bread where his eyes would be,” said Ron. “When you read the Purim story and say Haman’s name, you remove the eyes,” he explained.

For dessert there will be flaky, poppy seed-filled hamantaschen, yes. But the Arazis will also bake an abundance of cookies that Ron’s mother made on Purim each year to fill mishloach manot (baskets of food traditionally given to friends and family on the holiday). One of their favorites includes festively colored meringue kisses sprinkled with silver dragées.

The Purim dinner is representative of the Arazis’s larger vision to bring lesser-known Jewish foods into the limelight. “In the States, Jewish cuisine is almost always about the Eastern European side of things,” Leetal said. “We want to share a broader story.” They started by selling their couscous at a weekly food fair in Brooklyn — a dish they say everyone has eaten, but few have tried in the authentic, hand-rolled fashion and went on to teach a series of cooking classes around the city. 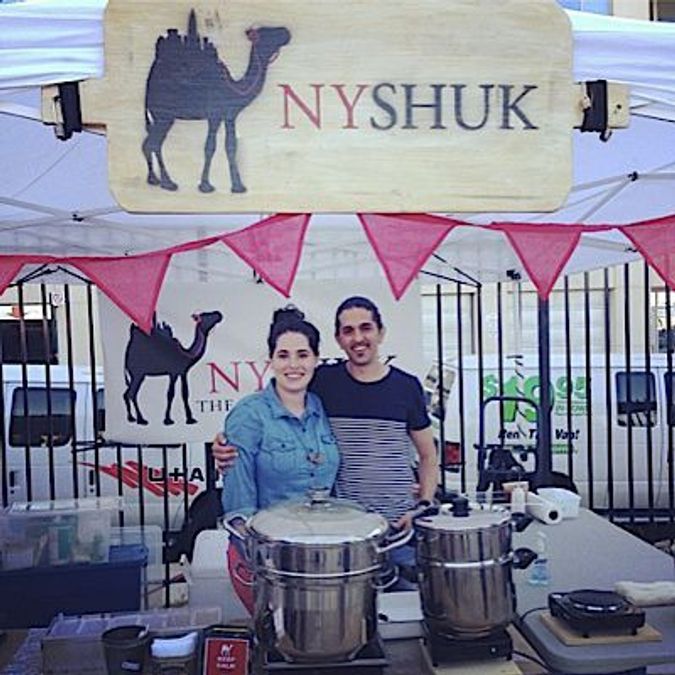 Cooking With a Mission: Leetal and Ron Arazi moved from Israel to New York, hoping to introduce their new home country to Sephardic and Middle Eastern dishes they love. Image by Celine Choi

More recently, they launched a small line of handcrafted products online including harissa, a dried fig and apricot spread called tanzeya, and l’ekama, a garlic and chili oil infused with Middle Eastern spices. They produce each in small batches at a commercial kitchen, going to great lengths to create authentic versions of the foods they love. Many other harissas, for example, augment their recipes with tomato paste and bell peppers. But NYShuk’s take is, as Ron put it, “nothing more than dried chilies mixed with a little white wine vinegar and salt to get things going.”

Both Leetal, 28, who is part Eastern European-American and part Turkish and Iraqi, and Ron, 32, who comes from Moroccan and Lebanese ancestry, grew up in Israel in food-focused families that celebrated Friday nights and holidays with elaborate dinners. Eventually, they each found their way to culinary school and the professional food world. They met while working at Herbert Samuel, an upscale restaurant in Tel Aviv, first spotting one another through the glass wall that separates the main kitchen where Ron worked and the pastry kitchen, where Leetal worked. “The rest is history,” Leetal said.

They married in 2011 and moved to New York City in 2012 to start NYShuk. “We loved it here, of course,” said Leetal of their decision to relocate. (They had previously spent time in New York together in 2009 while Leetal was working as a pastry chef at the celebrated restaurant, Nobu.) “But we also felt we could have a greater impact in America, because there is such a long way to go when it comes to introducing these foods.”

These days, the Arazis are wholly dedicated to their culinary and cultural mission. Their modestly sized Brooklyn kitchen is outfitted with two refrigerators and an additional freezer, which stores not just everyday food, but also ingredients for developing new recipes. In their closet, where most people might cram luggage or a vacuum cleaner, they store bulk spices, which they source from an Indian grocery store in Queens every couple of weeks. “We can go through 10 kilos of coriander seeds in no time,” Ron said.

Ultimately, they hope to become a resource for endangered Sephardic and Middle Eastern foods. “These traditions are being lost all over the world,” Leetal said. Ron agreed: “Making fresh couscous from semolina is time consuming, so hardly anybody does it anymore, even in Morocco and Israel. Give it one more generation, and forget about it.”

To help preserve these traditions, the pair leads cooking demonstrations and classes around the city at a number of amateur cooking schools like the Brooklyn Kitchen and offers private cooking lessons including one called ‘The Art of Couscous’. They also cater pop-up dinners like their Purim feast. Their events spread awareness about a region, a cuisine, and the fading culture that goes with them. Each event also allows them to introduce (and hopefully sell) their products to participants. As Leetal put it, “We’re not just making fancy mustards or ketchups, we are making products with names many people have never heard of. At the classes we can show people what they are and how to use them.”

The pair is grateful for the work of food historians and cookbook authors like Claudia Roden, whom they credit with laying the groundwork of bringing Middle Eastern and Sephardic foods into American consciousness. “She is an inspiration,” Leetal said. Meanwhile, they believe their unique blend of multicultural backgrounds and culinary expertise can add to that foundation, and hopefully inspire others to expand their culinary repertoires. “We don’t want to keep secrets about the dishes we grew up eating,” Leetal said. “We want people to bring these foods into their homes and make them for years to come.”

The Art of Couscous