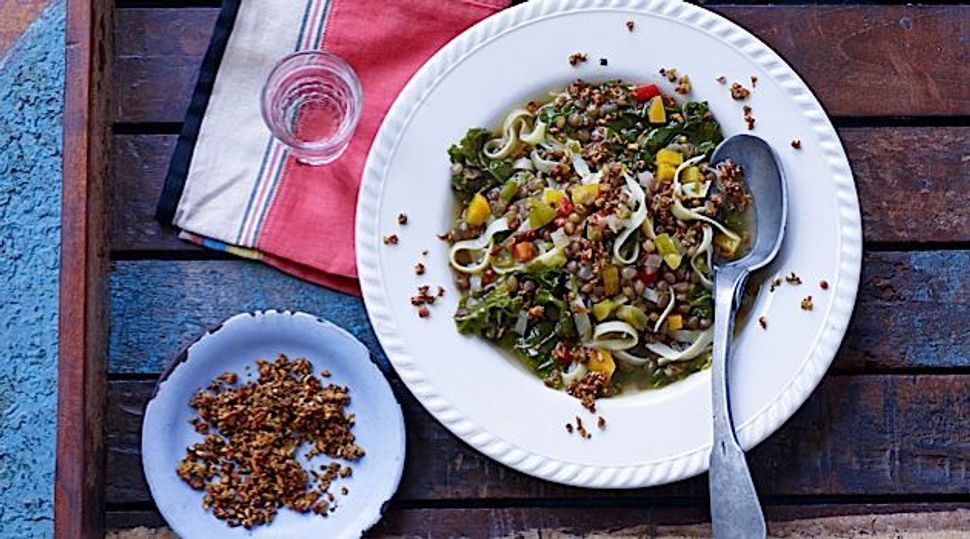 This hearty Palestinian soup known as rushtay is more commonly prepared by West Bank cooks than by those in Galilee; I learned how to make it from friends I met in Jerusalem. It is a meal in itself and a favorite among vegetarian patrons of Tanoreen. If you don’t have one of the greens on hand, just substitute more of the others. Don’t skip the squeeze of lemon near the end—it transforms the soup. Serve it with a few olives.

Combine the lentils and a pinch of salt in a pot and cover with water by 1 inch. Cover with the lid and boil over high heat for 20 minutes. Drain and set aside.

Heat the olive oil in a large pot over medium-high heat. Toss in the onions or shallots, and chile pepper, if using, and saute until golden brown, 7 to 10 minutes. Stir in the garlic and saute until fragrant, about 2 minutes. Sprinkle in the cumin, coriander and black pepper and saute until fragrant, about 30 seconds. Toss in the celery, carrots and cilantro, cover and cook for 5 minutes. Add the spinach, kale, tomatoes, if using, 15 cups of water and remaining 1 tablespoon salt and bring to a boil. Reduce the heat, cover and simmer for 20 minutes.

Pour in the lentils, return the broth to a simmer and cook for 10 minutes more. Add the fettuccini and cook until al dente. Stir in the lemon juice followed by the teklai, if using. Serve hot.

Variation: For a gluten-free version, cut six 8-inch corn tortillas into 1/2-inch strips and use in place of the fettuccini or use gluten-free pasta.