‘The Forest Feast’: Mashed Beets With Sweet Potatoes and Apples 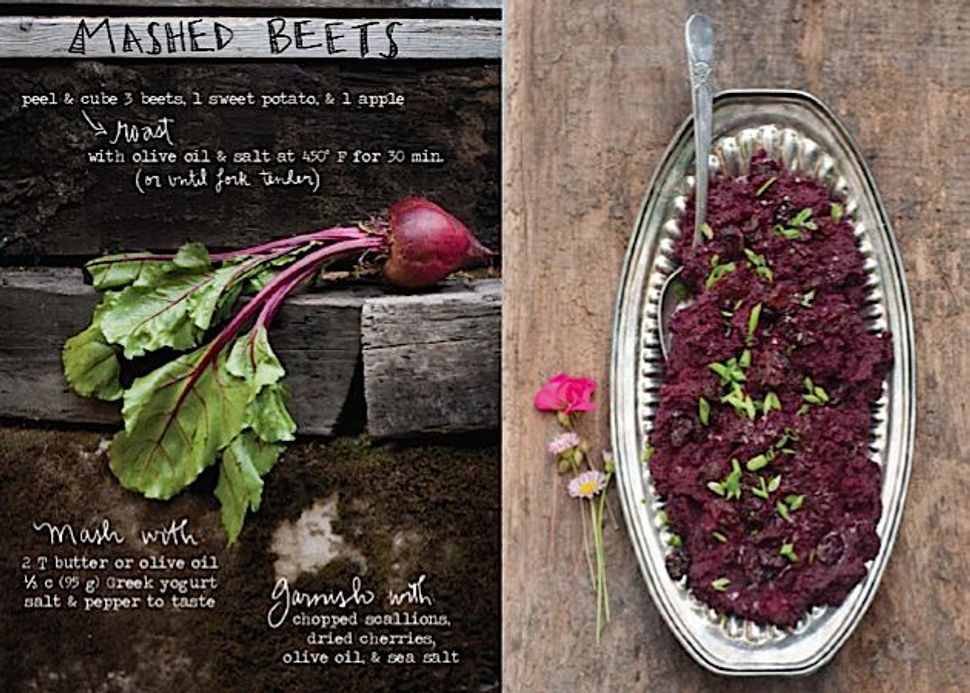 The mashed beets were another win, though there was a minor quibble or two with the recipe. Three beets are roasted along with one sweet potato and one apple, after being cubed, and then mashed with Greek yogurt and butter or olive oil, and topped with dried cherries, scallions, olive oil and sea salt. Beets are not one-size-fits-all, and Gleeson doesn’t specify what size to use. She also doesn’t say what kind of apple, so I went with a Granny Smith, to add some tartness. Dried cherries also come in tart and sweetened versions, and I happen to like tart, so that’s what I had on hand. The sweetened variety would have detracted from the dish, while the tart ones were the perfect accent.

My larger complaint with this recipe is that it says to roast, not specifying that a beet is harder than a sweet potato or apple, and therefore takes longer to cook. Next time I will put the beets on one tray and the sweet potato and apple on another, and that way I can leave the beets in longer. I tried mashing the veggies while still hot with a hand masher, no chance. I then got out my immersion blender, and still had trouble. The yogurt and butter were not enough, so I had to add some milk, as I would to mashed potatoes, to make them mashable. That did the trick, but the immersion blender was still working overtime.

My finished product turned out much lighter in color than Gleeson’s photo, making me wonder whether my beet ratio was too low; hers is as dark as beets are in their natural state; mine looked more like summer borscht with sour cream already blended in. However, the taste was excellent — with the sweet potato shining and the the sour cherries, scallions and sea salt working excellently as toppings.

Recipes, art and photography from Erin Gleeson’s “The Forest Feast: Simple Vegetarian Recipes from my Cabin in the Woods” used by permission.

‘The Forest Feast’: Mashed Beets With Sweet Potatoes and Apples