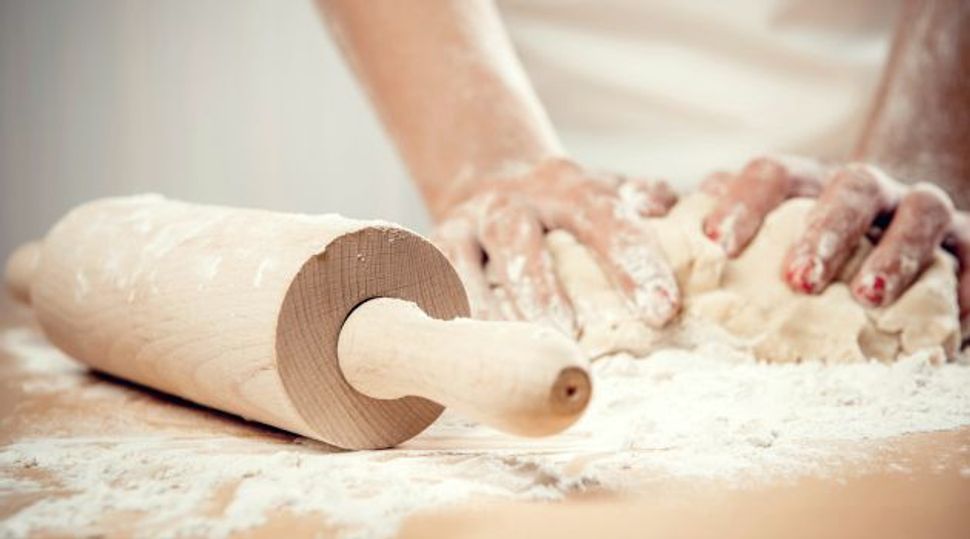 As a college freshman, feeling the pressure of my first ever round of finals, and with no kitchen or supplies of any kind, I found myself yearning to bake. It was a distracting, clawing desire, pulling at the edges of my attention as I struggled in vain to study Rousseau or economic specialization or whatever I was learning in my freshman year introductory classes. I had no resources — no microwave, no mini fridge, not even a hotplate — but I also had no choice; I knew studying would not happen until I made something.

After a little bit of research, I gave up on my books and gave into the urge. We had a variety of “markets” near campus — gourmet, high-end, specialty — but not “super.” With a scarf wrapped around half of my face to keep out the Massachusetts cold, I walked the frigid few miles to and from the nearest real supermarket. I stocked up on cake mix (a last resort, under the circumstances) and the requisite supplies. Then, late that night, a friend snuck me into the kitchen in the basement of her dorm so I could bake — and finally study.

I don’t even think I ate that cake myself, I doled it out to my friends, but that wasn’t the point anyway. There were easier ways to get a sugar fix. It was about the catharsis of mixing and measuring, the familiar, meditative nature of those repetitive motions, and the satisfaction of having created something (albeit with a little help from the Pillsbury Dough Boy). As I stood there stirring, watching the impossibly bright sprinkles swirl into the vanilla batter, my mind stopped spinning from the stress of impending exams, and the pressure that had been building during the semi-forced hibernation of studying was finally relieved.

College may be the first time I remember turning to baking as release, but it certainly wasn’t the last, and when I finally traded dorm life for post-grad apartment life in New York City, I set aside the cake mix for more ambitious dishes. When I needed to bake for the sake of baking, I turned to time-consuming, labor-intensive recipes — ones that would provide me with plenty of opportunity for repetition and reflection.

Early one spring, when the biting cold of winter was still hanging on with unbelievable tenacity, I found myself with a particularly nasty case of cabin fever. With people waiting out the last of the cold indoors, too sick of the freezing temps to venture outside unless absolutely necessary, I was going stir crazy, and I felt it again: I needed to make something, I needed to mix and measure and I needed to do it //ital.//now. Which is how I found myself in my then-boyfriend-now-husband’s apartment, in a grimy kitchen shared by four post-college guys and stocked with not much more than a pot for boiling pasta and a cast iron skillet (for steak), determined to churn out dozens of perfectly formed, three-cornered hamentashen. Purim was just around the corner, and the endeavor promised to take an entire afternoon. It was perfect. I had never made hamentashen before, nor any kind of cookie that required more effort than plopping balls of batter on a baking sheet, but how else would I learn?

I took my time picking out fun jams for the filling, bought a set of raspberry-pink measuring spoons, and hoped that I could dig up the rest of the necessities in the depths of the guys’ cupboards. With every surface in the kitchen covered in waxed parchment paper (so as not to contaminate my cookies), I set to work, getting creative when necessary, repurposing a sturdy pint glass as both rolling pin and cookie cutter. I wouldn’t recommend it (it can’t have been that safe), but I wasn’t even going to let the lack of an important tool stop me from making those cookies.

The process, a combination of problem solving — how to shape the cookies, how much filling to fold into them, how to keep the triangles from unfurling — and repetition (rolling, cutting, spooning, folding) was just what I needed. I focused on what I was doing, and the restless, baseless anxiety melted away.

Just over two years ago, in the aftermath of Hurricane Sandy, I found myself in that kitchen once again. Displaced from my apartment, I was taking refuge on the virtually untouched Upper West Side. With both my home and office in the cheekily-dubbed “powerless zone,” I stayed uptown for almost a week with little to do but wander around and puzzle over the surreal contrast between the neighborhood bustling around me in its usual rhythms, and the virtual paralysis that had taken hold just a few dozen blocks to the south.

In retrospect, I could have — should have — volunteered. I really wish I had. I could have served food at shelters, collected supplies or helped with clean-up efforts by the shore. I knew how lucky I was to have a place to stay, to have lost little more than a fridge full of food. But I was stunned, still struggling to process the magnitude of what had just occurred, feeling aimless and stranded uptown.

I did the only thing I could think of to pass the time and ease my mind: I picked a new recipe to tackle. I had been meaning to learn how to make challah, and this seemed like the right time to try. But I didn’t pick a classic recipe, I chose a twist on the traditional braided bread: pumpkin challah. It was a peculiar choice, but the recipe’s introduction imbued the ubiquitous winter squash with a particularly fitting symbolism, framing the pumpkin as a symbol of resilience, its thick shell protecting its soft, fleshy interior.

With that image in mind and the recipe in hand, I was determined to bake away my restless anxiety and begin to process what had happened that week. As I shopped for ingredients, I marveled at the obliviousness of the woman who was fighting with a store clerk over the lack of whole-wheat challah on the shelves, refusing to accept the Brooklyn suppliers’ lack of power as a suitable explanation for her one-time inconvenience.

As I kneaded the dough, I turned the events of the last few days over and over in my mind, revisiting the long walk I took downtown to check on my grandma (who refused to evacuate, even after losing power) and on my apartment. I had expected the lack of electricity to make the area feel eerie and lifeless, but if anything, it was the opposite — people strolling and congregating in the streets, restaurants setting up hot buffets on the sidewalk to feed passersby. There were volunteers canvassing my apartment complex, bearing boxes marked “emergency rations.”

Feeling the dough, cold and smooth beneath my fingers, I mulled over the warmth provided by a strong community. My grandma and I had crept down three flights of stairs, guided only by the beams of our flashlights, to share coffee and eggs in the half-darkness of her corner diner. The owners had thrown open its windows to let in the daylight, keeping it up and running while the sun was up, so that people could come together and eat.

As I waited for the yeast to work and the dough to rise, I swelled with gratitude. I was incredibly lucky, as were my friends and loved ones, to have made it through the storm with little more than a few days of headache and inconvenience.

As I braided strands of dough together and shaped the loaves, I wondered how the countless people who lost so much in the storm would begin to rebuild their lives.

By the time the hot, fragrant bread came out of the oven, I too, felt renewed, transformed.

As we move from the anniversary of Hurricane Sandy into Thanksgiving, I am reminded of that time two years ago, the day I spent in the kitchen feeling simultaneously displaced, yet firmly rooted. I plan to revisit that pumpkin challah for the upcoming holiday, once again using the rhythm of mixing and kneading to focus my thoughts. This time though, I’ll be thinking about the things I am thankful for, meditating on the past year — and the one to come.