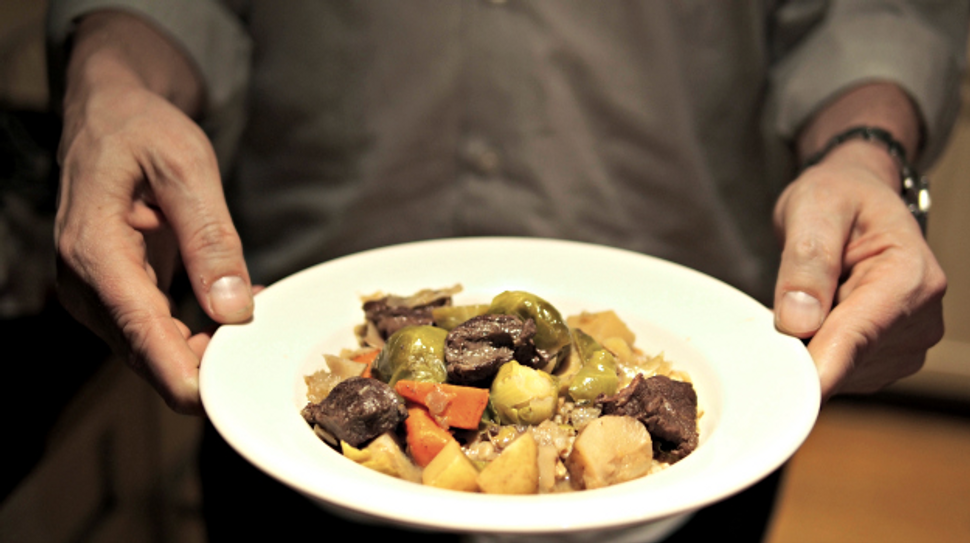 When I saw that my CSA, Farmigo, was offering grass-fed lamb stew meat from sheep raised on family farms in the Hudson Valley, I pounced. Frigid January days just seem to require the sort of stick-to-your-ribs sustenance that only a good stew can provide.

Still, I’ve been trying to strike a balance between hearty and healthy, so I decided to tip the scales in favor of the vegetables in my pot. For eight people, I added two pounds of meat — only four ounces per person — and loaded up on carrots, Brussels sprouts, shredded cabbage, Jerusalem artichokes, and, because I had a few small, waxy potatoes left over from when I made the borscht at the beginning of the week, just a few of those.

Instead of creating a heavy gravy thickened with flour or bolstered by barley, I opted for an elegant broth-and-wine base spiked with a dash of vinegar, and served the stew over farro, which is a barley-like grain, but firmer and nuttier.

The resulting dish was immensely satisfying and warming without weighing us down.

The label on my lamb said simply, “lamb stew meat,” so I’m not sure what the cut was. Because it was perfectly tender in two hours, I imagine it was leg and not shoulder, which is more fibrous and takes longer. Test your meat after the first hour and if it seems to be on its way toward tender, throw in the veggies and give it another hour. If it’s still quite tough, simmer a bit longer before proceeding with the next step. Stew is very forgiving, and is meant to be comforting, so please don’t stress.

1) Pat the meat dry and season with salt and pepper. Heat a large, heavy pot on high, add a tablespoon of oil and brown half the meat. Repeat with second half. Remove meat to a bowl.

2) Lower heat to medium-low. Add remaining oil to the pot, then add onion, carrot, and Jerusalem artichokes, stirring. Cook 2-3 minutes. Add wine and scrape any brown bits from the bottom of the pot. Return meat to the pot. Add stock, vinegar and thyme; cover and cook on low for 1-2 hours or until meat is almost tender.

3) Add Brussels sprouts, cabbage and potatoes, cover, and cook for 30 minutes more. Taste for seasoning, adding salt and pepper as necessary, and serve over pasta or farro if desired.