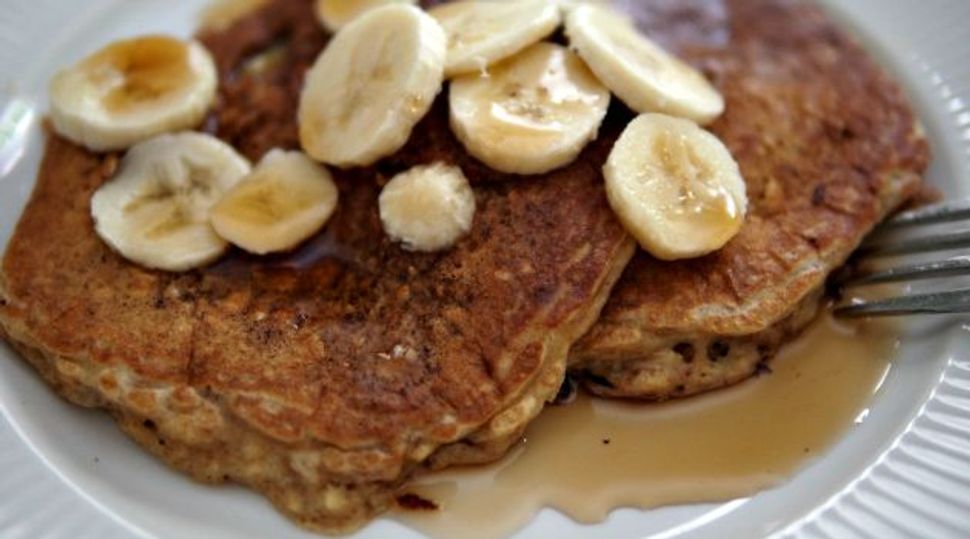 The flu came on so suddenly, I didn’t have time to make my own chicken soup. Thankfully, Zabar’s is right around the corner from the pediatrician, where my husband, Mark, and I both accompanied the ailing 11-year-old, all 104 degrees of him.

A quick march to the back of the store for the Jewish penicillin, four fluffy matzo balls on the side, and I was out of there. When the acetaminophen finally kicked in and our boy’s appetite made a brief, wan appearance, that’s what he ate. Half a bowl; better than nothing.

Sunday morning the fever was fiercer. On the phone, the pediatrician assured me that it was probably worse for the parents than the child. Acetaminophen plus ibuprofen. Cold compresses. Hot pink cheeks and shivers. Water and gatorade.

And suddenly, midday, he was back to almost normal, at least for a blessed three and a half hours. The older brother, neglected, asked for pancakes. What a good idea, I thought. I make these hearty, delicious ones that are so much better for my kids than they realize. They involve oatmeal and protein-rich Greek yogurt and only a bit of flour (gluten free, for me) along with walnuts for texture and additional protein and bananas for sweetness and potassium. Bathed in dark, sticky maple syrup, they go down easy and offer all kinds of nutrition.

You don’t have to be sick to enjoy them. They’re my go-to special breakfast, always met with particular delight. The fact that they’re loaded with good-for-you things can stay between you and me.

These happen to be gluten free, but you won’t miss anything. (Substitute ¼ cup all-purpose flour and ¼ cup whole-wheat flour for gluten-free flour if you like. I got the recipe, which I’ve adapted over the years, off the back of a box of McCann’s Quick Irish Oats, and that’s how it was originally.)

2) Heat a griddle or large frying pan over medium heat until hot. Heat a teaspoon of coconut oil. Make one pancake (the first one’s usually a sacrifice) by dropping about a third of a cup of batter onto the skillet, waiting two minutes, until the bottom is golden. Flip and cook until the other side is golden, 1-2 minutes more. Repeat with the rest of the batter, cooking 2-3 pancakes at a time.

3) Top with sliced banana and warm maple syrup and serve.