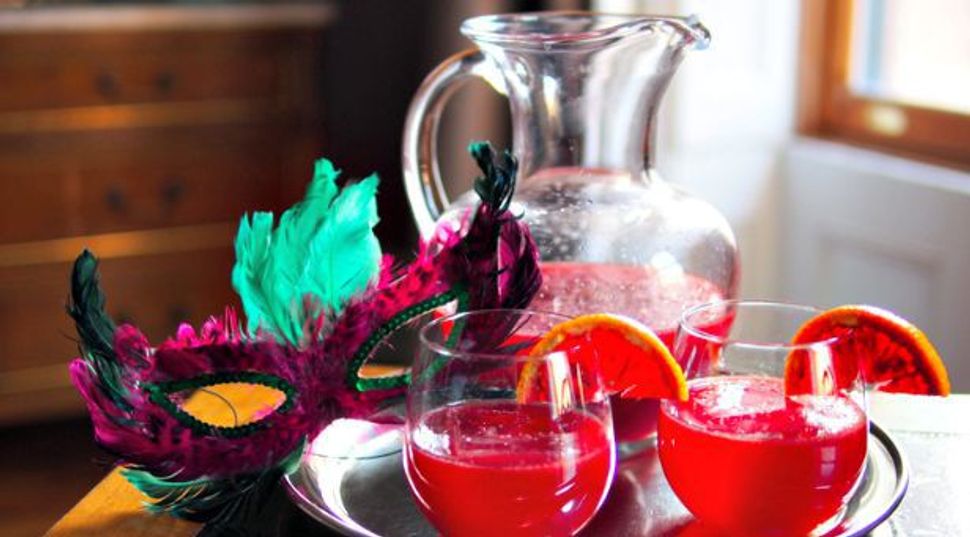 Since she can’t rename the holiday itself, our columnist comes up with a cocktail to honor her Purim heroine. Presenting… The Esther. Photograph by Liza Schoenfein.

By now we’ve clearly established that when a Jewish holiday comes along, I will not know a thing about it. What I appreciate about my lack of formal religious training is that I get to look at the customs and rituals without biases, but with an actual interest in learning about them. As an added bonus, my education comes mainly from a 1950s cookbook, read at leisure, usually with a cup of tea.

Tea sidebar: My grandfather, Samuel Major (née Mazaroff — thank you, Montreal immigration personnel), used to drink his tea from a clear glass mug, with a cube of sugar between his top and bottom teeth. He would sip the tea through the sugar cube, and once the cube had dissolved, he’d start another. I’ve always wanted to drink tea this way, but cavities and weak teeth loom as a genetic inevitability, so I have to let that family tradition pass into memory.

Back to Purim: It’s a good holiday; I’d even venture to say a great one, even though it doesn’t merit High Holiday status. Why great? Because it was a woman who saved the day!

My ladies of Jewish lore and traditions, Fannie Engle and Gertrude Blair, did a fine job explaining the story and the traditions that we now celebrate. Knowing the background, if I had my way the holiday wouldn’t be called Purim at all, it would be called EstherPalooza. But I rarely get my way, so I’m not holding my breath.

I do have doubts as to what really happened when Esther revealed her true Jewish self in ancient Persia. According to Engle and Blair in their educational masterwork, “The Jewish Festival Cookbook,” “It was a most hazardous undertaking, and the queen fortified her spirit with prayer and fasting before entering upon her task.”

Prayer? Sure. Fasting? Not so sure that’s the best way to screw up one’s courage. But if Engle and Blair say it worked for her, I’ll buy it. What’s clearly missing in this retelling, though, is the one ingredient that’s key to mustering up courage when you really need it: booze. I have a hard time believing that Esther didn’t slug back a couple of glasses of wine before risking her life and those of her people by outing herself as Jewish. My wine theory makes a lot of sense, especially when you read further on in Engle and Blair:

“One of the most colorful and dramatic of modern celebrations takes place in Tel Aviv. It is called Adloyada, meaning, ‘Until one does not know.’ This is a reference to an injunction of the Talmud, which prescribes that one be merry to the point of not knowing whether Mordecai is to be blessed and Haman cursed or vice versa.

In the story that is my life I have been merry — I’ve even been super-merry — without any type of stimulant or external substance, but “merry to confusion”? I think we all know what that’s a euphemism for.

Now, I’m not advocating going out on Purim and getting ridiculously merry — no one wants to see that, especially the children — but I do, as always, have a cocktail recipe for the occasion. It’s called the Esther, and it’s meant to offer our heroine the wine I hope she drank — in the form of sparkling rosé, because it’s festive. The ruby-colored citrus juice symbolizes the blood she kept from being spilled.

With that in mind, remember not to get all “merried up” and drive a car. It’s never the right choice, and I’m pretty sure Esther would be rather disappointed in you.

Not everyone will have the patience to squeeze blood oranges, but the fresh juice is a feast for the eyes — a deep purple/red that can be found only in the natural world. If you can’t find these oranges, you can certainly use juice from a carton. If you’re having people over, consider turning this into a punch. (To serve six, use a bottle of cava, 12 ounces of juice and 3 ounces of sweet vermouth.)

1) Pour ingredients into a glass over ice. Stir. Drop in a slice of blood orange.

2) Lift the glass, give a toast to Esther and enjoy.