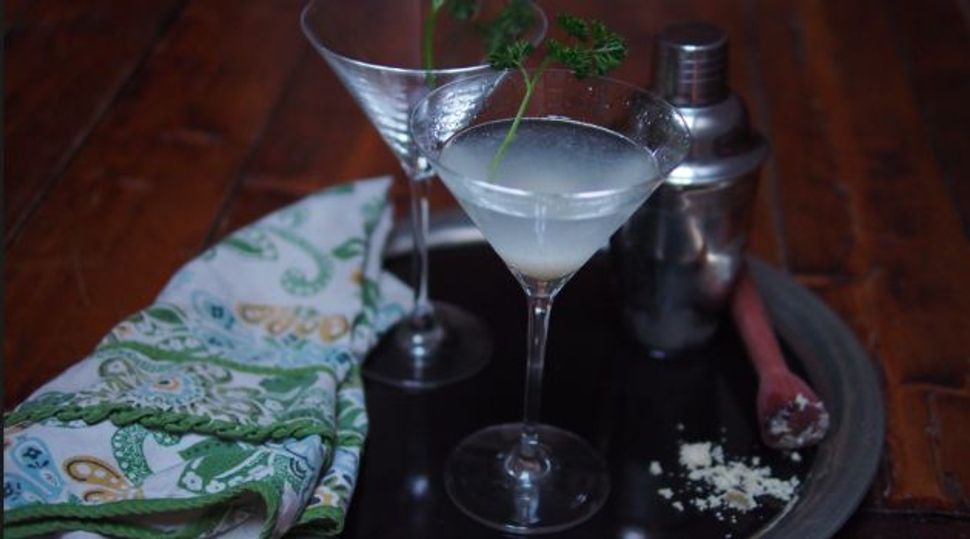 This Passover-themed take on a vodka martini incorporates fresh horseradish and parsley. Photograph by Liza Schoenfein

At one Passover Seder I attended, all the guests brought dishes to contribute to the meal. As each person entered the apartment, the words “Do you have a bowl for this?” were uttered. Since that day, I have thought of Passover as The Festival of the Bowls. The meal was fabulous, by the way. I ate so much lamb that by the time dessert rolled around I had the urge to graze lazily on a hillside and say “Baa.”

One commonality (beyond the ritual readings and traditions) I’ve noticed among the various Seders I’ve been to is that prior to sitting down, there is a lot of prep work, setting of tables and entertaining of children. On any other evening, this would be considered cocktail hour. But, as we know, this night is different from all other nights. For one thing, four cups of wine are consumed.

Should that preclude a delightful pre-Haggadah beverage? I think not. (If you’re worried about overconsumption, perhaps you will allow a sip to stand in for a cup of wine each time you are instructed to drink.)

A pre-Seder cocktail should be simple and straightforward, because the meal preparations are so involved. And of course it should feel springlike — ideally made with ingredients that tie it to the holiday.

What could be more straightforward than a martini? Flavored not with an olive or lemon rind, but with a bit of freshly grated horseradish, and garnished with a sprig of parsley, it’s a Seder plate in a glass!

I decided to start with vodka, which would provide a clean slate upon which to build my flavors. L’Chaim, which produces a corn-based vodka, makes a beet-based one that’s kosher for Passover. And then there’s Distillery 209, which makes gin and vodka, both KFP. Luksusowa is a Polish potato vodka that’s kosher, and if you are simply refraining from grains, there are several non- hecksher potato-based vodkas that are widely available, including Tito’s (which I drink — delicious) and Chopin.

A note on martinis: Some people like the vermouth mixed with the gin or vodka in the shaker, while others enjoy the vermouth swirled around the martini glass and then poured out before the shaken vodka or gin is added. This “in-and-out” method happens to be my preference. Then there are those who simply whisper the word “vermouth” over the glass. (Speaking of vermouth, Kedem makes a nice one, kosher for Passover.) Purists insist that a true martini be made with gin; never with vodka.

Speaking of purists, they shudder at the thought of shaking a martini, because you “bruise” the alcohol — diluting it a bit as the ice chips off and into the liquor. And if you add vermouth to the mix, it may become cloudy. But this drink is a little cloudy anyway, because of the horseradish. And I like shaking my drinks. It’s fun.

I say there’s only one correct way to make a martini: the way that you like it.

Prior to making the drink, I suggest putting your martini glasses in the freezer to get them good and chilled. Alternatively, fill the glass with ice and water while you prepare the drink; then toss it out.

1) Grate horseradish, place in the shaker and give it a good muddle with a muddler or small wooden spoon, to release the essence of the root.

2) Fill the shaker with ice and add the vermouth. (Or, if you want your drink very dry, pour vermouth into the martini glass, swirl it around to coat the surface of the glass; then pour out any excess.) Add vodka and shake vigorously for about 10 seconds.

3) Strain into martini glass garnished with a sprig of parsley (and a little stalk of fresh horseradish if you like).

Naomi Major is a writer living in the Inwood neighborhood of Manhattan. You can find more of her writing at www.naomimajor.com