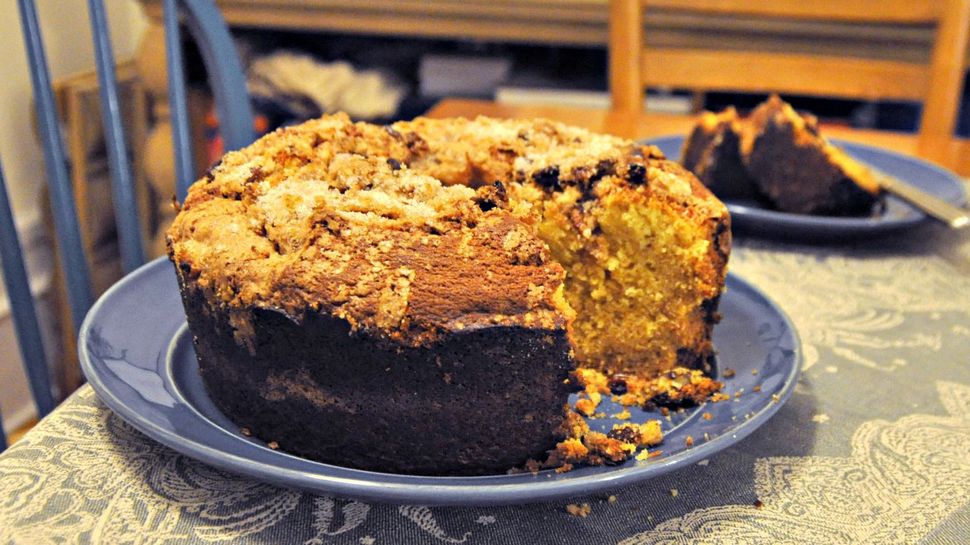 For Shavuot (or any dairy meal), a dessert that gets its pleasantly tangy taste from sour cream. Here’s the recipe:

It seems to be an unwritten rule in New York City that every supermarket must exist in its own little cell-service dead zone. Perhaps it’s intentional, to discourage comparison shopping — maybe I’ll walk out of the store if I learn that Greek yogurt is a dollar cheaper down the block, or that another place is having a two-for-one special on blueberries. Maybe it’s accidental, and the walls of refrigerated cases act as a barrier, blocking beams from the nearest wireless tower.

Whatever the case, there was a period of time when I regularly found myself huddled in a supermarket aisle with a half-full shopping cart, willing my phone to load an OU press release or a discussion on a synagogue message board so that I could look up the answer to a pressing question about kosher laws.

As someone new to keeping a kosher kitchen, I struggled with grocery shopping. I struggled to identify the various heckshers, and often, to determine whether the strange marking I was looking at was in fact a hecksher at all. I struggled with the higher prices of certain kosher foods. I spent more time than I care to remember at the supermarket, walking up and down the aisles looking for kosher versions of everything on my list.

But my biggest struggle of all was keeping dairy out of meals. And by meals, of course, I mean desserts.

My favorite desserts to bake — and consume — all seem to feature some form of dairy. Sure, there are plenty of great I-can’t-believe-it’s-not-dairy recipes out there, but for every winner, there are countless inferior approximations of their dairy-filled cousins. When it came time to put together a festive meal or a Friday night dinner, I could plan a balanced menu with ease, but when it came to choosing a recipe for dessert, I was stumped. Should I attempt to modify an old favorite? Should I suck it up and choose a classic pareve dessert, classically loaded with margarine?

Even after I settled on a recipe and set off for the supermarket, shopping list in hand, things were never simple. Once, with a recipe that called only for a milk substitute — and how hard could that be to find, in a city where every coffee shop stocks multiple varieties of dairy-free milk? — I found myself back in that all-too-familiar position, willing my phone to load the OU webpage. I had just discovered, much to my distress, that every single milk substitute — almond, soy, and rice — was marked with an OU-D. What’s the point of a milk substitute, if it still contains dairy? Even after I learned that these particular D’s designated a product produced on dairy equipment, I still had to scour the internet to find a brand of milk-substitute without the dreaded D designation, just to be safe.

Eventually, I found my dairy-free footing, but pareve baking still felt restrictive. It took something I was familiar with, something I enjoyed, and catapulted it out of my comfort zone. Sure, I could’ve bought a pre-packaged rainbow cake or a chocolate meltaway and called it a day, but that would have felt like giving up. I wasn’t about to let a new set of rules take the fun of baking away from me. If I was going to keep a kosher kitchen, I was going to go all in.

Slowly, I built a repertoire of pareve dessert recipes that weren’t 90% margarine. I learned where to shop to find the completely D-free milk substitutes. I bookmarked a slew of vegan food blogs to expand my recipe horizons. I manage, but it still always feels like something is missing.

Always, that is, unless it’s Shavuot, the rare holiday where it’s not just acceptable to serve a dairy meal, it’s expected. Finally, when Shavuous comes around, I can dip into my cache of full-dairy dessert favorites and go wild, using all of the milk, butter and cream I want. (Not the healthiest, sure, but we’re talking dessert here, and what’s the point of allowing yourself an indulgence if it isn’t indulgent?)

This year, I’ll be celebrating the break from pareve baking with a selection of desserts that don’t just include dairy, but showcase it. Cheesecake. Ice cream. And an old family staple, a coffee cake that gets its characteristic tangy flavor from one key dairy ingredient: sour cream.