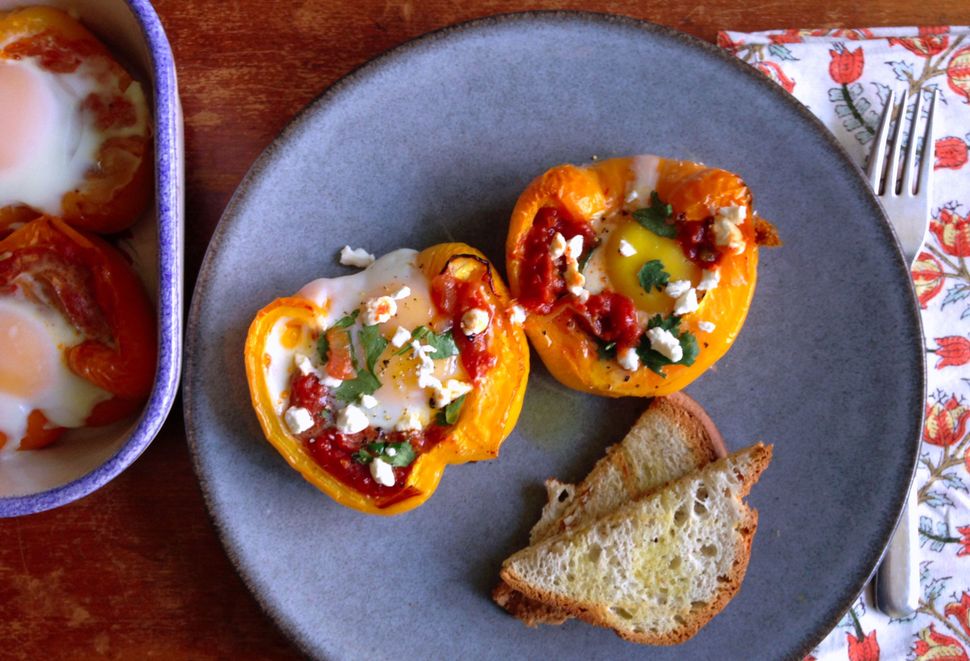 When I was growing up, like many children, I looked forward to Sukkot. Every year there was a sense of anticipation swirling about the crisp air on the cusp of fall. And of all the Jewish holidays, it was the most delightfully sensory — a chance to sniff the citrusy etrog, rattle the lulav branches and spend mealtime outside in the sukkah, wrapped up in blankets.

Granted my family’s sukkah, on the years we got around to making one, was only a piddly little thing in our backyard. Still, I was always proud of it. And every year we would head to our synagogue to construct the communal sukkah in the parking lot, sipping warm apple cider while we strung gourds through the rafters.

As an adult, I have come to particularly appreciate Sukkot’s food themes as well. Unlike Passover’s matzo ball soup, Purim’s hamantaschen, or Hanukkah’s latkes, there are not a lot of specific traditional foods that people immediately associate with Sukkot. The most important thing is that meals are eaten while sitting inside the sukkah.

And yet, there are plenty of symbolic connections to be made. Sukkot falls directly during the fall harvest season, a time of particular abundance, which means vegetable- and fruit-focused dishes tend to dominate. As Gil Marks wrote in “The Encyclopedia of Jewish Food,” “In particular, stuffed vegetables and filled pasta, filled pastries, and filled pies, symbolizing plenty, are commonplace on Sukkot tables.” For Ashkenazi families, stuffed cabbage and peppers are often served, as are sweet and savory strudels. Sephardic Jews, on the other hand, might eat stuffed grape leaves, miniature eggplants overflowing with rice and spiced meat or filled savory pastries like sambusak.

And then, of course, there’s breakfast. It is customary to eat all three meals in the sukkah throughout the holiday. But it feels a bit anticlimactic to sit in such a majestic, natural setting with a bowl of cereal or a toaster waffle. So in the hopes of giving a bit more honor to Sukkot’s breakfasts, I developed shakshuka stuffed peppers.

Shakshuka, the North African dish of baked eggs in tomato sauce, is popular throughout Israel and is becoming well known in America. It also happens to make a perfect fall holiday breakfast. Loaded with vegetables, it readily evokes the harvest abundance. The baking dish travels easily from kitchen to sukkah. And served piping hot with toast (save the more commonly used pita for lunch or dinner), it is warming, flavorful and fully satisfying.

Typically, the sauce for shakshuka includes bell peppers along with tomato and spices. But in the spirit of eating filled foods, and merging Ashkenazi and Middle Eastern Jewish cuisines, I decided to bake the sauce and eggs directly in bell pepper cups. While baking, the peppers sigh and collapse into tender pockets. And the whole beautiful mess gets topped with a generous sprinkle of za’atar, crumbled fresh goat cheese and chopped cilantro. (Cilantro avoiders can substitute flat leaf parsley.)

On the plate, the dish resembles a bed of fallen leaves — a riot of red sauce, yellow peppers and vibrant orange yolks. Mopping up the sauce while peeking up at the sky through the sukkah’s loosely thatched roof, it is easy to feel grateful for the bounty of the season.

Select squat, globe-shaped peppers for this dish, rather than long, thin ones. The round shape helps to keep the sauce and egg in place while the dish bakes.

1) Preheat the oven to 400˚ F. Slice the peppers in half lengthwise (through the stem) and remove the seeds and stem. Arrange peppers, cut side up, in a large baking dish; drizzle each with a little olive oil and sprinkle lightly with salt and pepper. Bake until peppers are tender, 25–30 minutes.

3) Turn heat to medium-high; add the tomatoes with their juice and the sugar. Bring mixture to a simmer, then turn heat to medium and cook, stirring occasionally, until thickened and saucy, about 15 minutes. Remove from heat, taste and season with more salt and pepper if desired.

4) Remove peppers from the oven and set baking dish on a dish towel; carefully fill each pepper about halfway with sauce, making sure to leave room for the egg. (If you have sauce left over, it makes a delicious pasta sauce.) Crack 1 egg into the center of each pepper — don’t worry if a little white spills into the bottom of the pan. Bake again until sauce is bubbling and egg whites have set, but yolk is still soft, 10–15 minutes more. (Take them out slightly before they appear done, as they will continue to cook out of the oven.)

Leah Koenig is a contributing editor at the Forward and author of “,” Chronicle Books (2015).