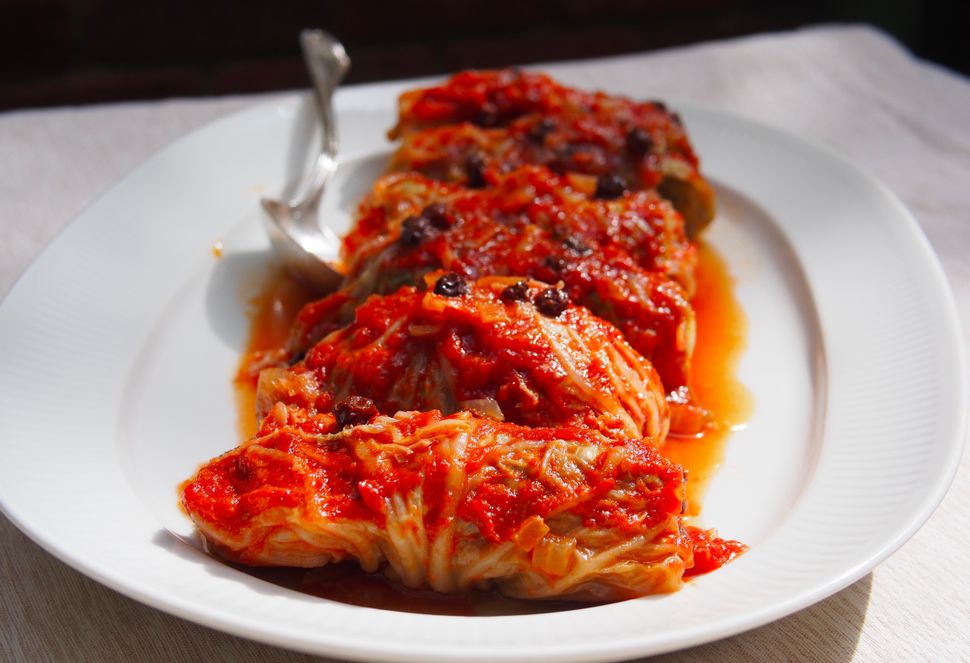 The list of foods I don’t like is short. And today it got even shorter, because today I gave stuffed cabbage a second chance.

My maternal grandmother often made this Ashkenazi classic, and as a kid I found the sweet-and-sour flavor of the sauce utterly objectionable. While everyone else at the table seemed to relish it, I couldn’t stand it.

I receive a lot of cookbooks in my position as food editor of the Forward, and stuffed cabbage keeps popping up. After years of developing and testing recipes and cooking for family and friends, I have the ability to read a recipe and kind of know what the finished dish is going to taste like. And oddly, when I read through each of the stuffed cabbage recipes, the idea of savory ground meat swathed in soft cabbage leaves and bathed in a tart-and-sweet tomato sauce actually started sounding good to me.

Since stuffed vegetable dishes are traditional at Sukkot, I thought this was the perfect time to revisit my childhood nemesis.

There wasn’t a traditional recipe in the JCC’s wonderful “Community Table” cookbook, but there was a sidebar next to a recipe for Iraqi lamb burgers explaining how to turn the minty, allspice-and-cinnamon-infused meat mixture into a Sephardic-flavored stuffed cabbage. I liked this idea a lot and decided I had to try it.

But I also wanted to make a classic recipe, to see if I’d actually acquired a taste for the stuffed cabbage of my childhood.

I found a really traditional one by Arthur Schwartz in “Eating Delancey” by Aaron Rezny and Jordan Schaps. Schwartz is such a trusted authority on Jewish food that I felt if anyone was going to serve up a stuffed cabbage recipe that tasted like my grandmother’s, it was he.

So, like the crazy foodie I am, I decided to make the lamb-based Sephardic take and the classic Ashkenazi kind with ground beef. At the same time.

Both recipes had their own version of tomato sauce (they were fairly similar), but to simplify things, I opted to choose just one, and it was Schwartz’s (minus the optional ginger snaps he suggests flavoring the sauce with at the end). My one real adjustment was to decrease the amount of brown sugar in the recipe. His called for 1/3–½ cup, and I settled on 3 tablespoons. (And instead of raisins, I used little currants.)

The JCC’s lamb-based filling was exceptional, tucked into cabbage leaves and covered with the currant-flecked tomato sauce. I was sure I would like it better than the regular ground-beef-based dish. But when I tasted the traditional version I was transported to my grandmother’s table, suddenly recalling the room, the voices, the smells, and the tastes of that long-ago time as if I were there. Both dishes were easy to make and entirely satisfying. Now that I’ve revised my opinion of this old-time Jewish entrée I plan to make it — both types — again and again.

1) Core a large savoy or green cabbage and steam it over boiling water until whole leaves can be peeled off the cabbage head. If you find that you can only peel off a few at a time, return the cabbage to the steamer for a few more minutes until the leaves are tender enough to remove without tearing. You should get about 12 large leaves. Slice the remaining inner leaves, which are too small to stuff, very thinly. Scatter half of these sliced leaves in the bottom of a medium pot. With a knife, score the ribs on the leaves you will stuff so that the leaf is pliable.

2) Place about ¼ cup of the lamb mixture on the stem end of a leaf and begin to roll, tucking the sides in as you enclose the filling. Arrange the rolls tightly in the pot and add the rest of the sliced cabbage.

3) In a bowl, mix sauce ingredients. Pour the liquid over the cabbage. Bring to a boil. Reduce to a simmer, cover and cook for about 1½ hours or until the meat is cooked through. Garnish with chopped mint.