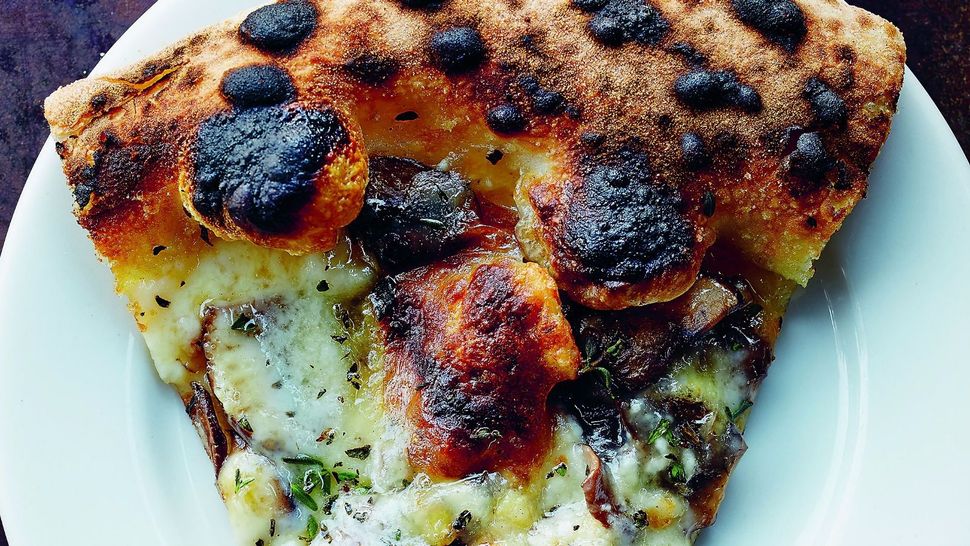 We like a puffed-up, pillowy pizza crust with a charred surface and a tender, chewy crumb. A combination of fine-milled, low-gluten 00 Italian flour mixed with a higher-protein bread flour helps achieve this result. The dough is mixed and allowed to rise in bulk, and is coated with olive oil while being turned at 30-minute intervals, to help achieve the elasticity and strength needed to be pulled superthin. After 2 to 3 hours (depending on the ambient room temperature), we punch the dough down a final time and retard it in the walk-in fridge for a minimum of 24 hours. Then we divide it into 6½-ounce portions and allow a final rise before shaping the pies. We have found that a dough with some age has a more complex flavor, caramelizes to a more beautiful golden hue, and develops a crisper outer crust than a younger dough made under the same conditions.

I’m sure there are people shaking their fists in passionate disagreement while reading this. But, hey, there are many approaches equally logical, if conflicting, opinions on this topic. Run some experiments of your own and adjust this recipe to your liking. This recipe is among the simplest I’ve worked with, and the most reliable in quality and consistency. The dough should maintain a temperature of about 80° F throughout the mixing process, so make sure your kitchen isn’t too cool. And your results will be more reliable if you weigh the ingredients, even the water.

At Gjelina, we employ a wild yeast starter culture for our bread, but we rely on commercial yeast for pizza. The result is a crust with a lighter texture and a less assertive flavor.

1) In a small bowl, combine the water and yeast, stirring until the yeast dissolves.

2) In the bowl of a stand mixer fitted with the dough hook attachment, combine the 00 flour and bread flour. Add the dissolved yeast to the flours and mix at medium speed just until the dough comes together, about 3 minutes. Drape a clean kitchen towel over the dough and let rest for 15 minutes. Add the salt and mix at medium-high speed for 5 to 7 minutes, until smooth and very elastic.

3) Coat a large glass or metal bowl with the olive oil. Fold the dough into thirds like a giant letter and put it in the bowl, turning it over several times to coat it with oil. Cover the bowl with plastic wrap and let the dough rise at warm room temperature until it has increased its volume by 50 to 75 percent, about 3 hours. Punch the dough down, fold in thirds, and rotate it 90 degrees, then fold in thirds again. Cover the bowl with plastic wrap and refrigerate for 1 to 2½ days. If the dough grows larger than the bowl, punch it down, and return to the refrigerator.

4) Divide the dough into three 6½-ounce pieces. Dust a little bread flour on your work surface, put the dough on the work surface, and, pressing down on it lightly with the palm of your hand, roll it in a circular motion, forming a boule (dough ball). If the dough is sliding around, there is too much flour on the work surface. Wipe some away if necessary. You need some friction between the work surface and the dough, but not so much that the dough sticks and makes a mess. Once the dough gathers into a tight ball and the outer layer of dough is pulled taut over the surface, check the bottom of the dough to see that the seam has sealed. If there is an opening on the bottom, you need to roll the dough more tightly or it will tear easily when stretched. Repeat with the remaining pieces of dough.

5) Transfer the dough balls to a baking sheet brushed with a bit of olive oil, leaving plenty of space between the balls so they have room to rise and expand. (The boule shape encourages an even, round, and more vertical rise, as opposed to a flatter, more irregular shape.) Brush the tops with a bit of olive oil, loosely cover with plastic wrap, and let rise at room temperature until doubled in size, 1½ to 3 hours.

8) Some of my guys with smaller hands use two hands to stretch the dough as it grows larger, using this tech¬nique: With the palms of your hands facing down, slip your hands under the dough, lift it up, and use the backs of both hands to gently pull on the dough while continuing to turn it. The dough should stretch easily, resting on the backs of your wrists and forearms, so do not pull on it too much. If it is superelastic, then the dough probably has not proofed enough. If the dough is supersoft and tears easily, it has proofed too much. You are done stretching out the dough when it is 10 to 12 inches in diameter and thin enough so that you can read a newspaper through it. This takes a bit of practice so be patient, but under no circumstances should you resort to a rolling pin.

9) Follow the topping and baking instructions, as directed in the pizza recipes, repeating the stretching process for the remaining dough balls while the pizza you stretched and just topped cooks.

Recipe reprinted from “Gjelina: Cooking From Venice, California,” by Travis Lett with permission from Chronicle Books.