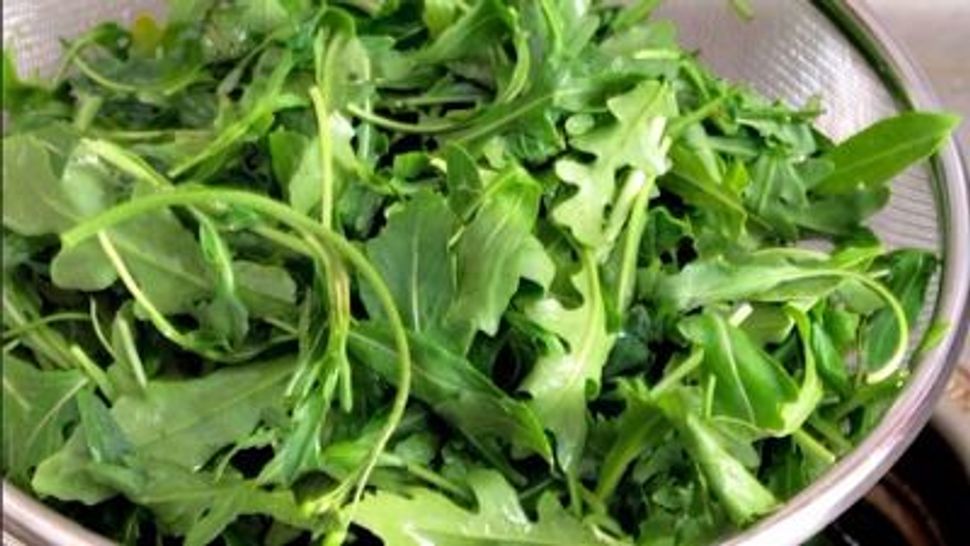 There was a point in time when arugula was a code: a vegetable that said “here is the great white bobo-latte-liberal!” All the way back in 2008 — if your memory has not drowned it out — President Obama was called distant for complaining about . After that, arugula became associated with the cultureless American liberal rich — “that salad green that they eat as they…” well, fill in your stereotype here. So it would seem then that arugula would be diametrically opposed to the traditional, hearty, of-the-people tradition of Jewish food. It would seem.

But does arugula, in fact, have a Jewish history? It turns out that it might not be so “un-Jewish” after all.

Let us go back to the time of the Babylonian Talmud. In Tractate Yoma 18a-18b, it is noted that gargir is coterminous with orot, a plant mentioned in the Book of Kings. And what is gargir? It is commonly identified as arugula — a plant that was already known in the region, and is still known as gargir in Arabic and several other languages. The Talmudic sages recommended that one should eat arugula should one find it in the wild — or rub it over the eyes.

Yet it was forbidden to the High Priest during the seven days preceding Yom Kippur, for it was said to foster impurity. And why is this? The Talmud is unclear, but other histories offer an answer. One theory is that arugula was, to put it succinctly, the Viagra of its day. Lest the High Priest become too sexually aroused and resultantly impure for ritual prior to the holiest day, arugula and other similar plants were barred to him. Apart from this, arugula had enjoyed a long history as a culinary item and aphrodisiac in the ancient Near East and Rome – and ancient recipes from across the Mediterranean world make use of the plant. No doubt, it was also in a Jewish cuisine that was not that different from Jews’ neighbors’.

In the Mediterranean, arugula continued to appear in Jewish food – and ritual. Arugula was recommended as an ideal vegetable to act as karpas – the bitter green – at the Passover Seder by Amram Ga’on, the ninth-century rabbi and Talmudic genius. Meanwhile, it was found across the Mediterranean world – from gardens in France under Charlemagne to its native habitat in the Middle East. Across this area, arugula found its way into soups, stews and other dishes; contemporary writers noted that the plant was frequently consumed in Egypt and the Levant. Its use as an aphrodisiac continued in this time as well: Arab doctors of the medieval era recommended the consumption of arugula seeds with honey as a remedy against sexual impotency. In an era where, again, Jewish food was in “conversation” with the other cuisines it encountered, it is not too much of a stretch to say that arugula, too, found its way into Jewish pots.

Later on, in modern times, the cultivation of arugula spread. European settlers brought the plant to the Americas; arugula also became popular in the United Kingdom, where it is still called rocket. Its presence in Italian cuisine – including Italian-Jewish cuisine – meant that the vegetable became ever more popular as Italians and their food spread around the world. Of course, the consumption of arugula never died in the Middle East, where even today it may be served with a variety of dishes across the region – including in Israel. The popularization of these cuisines in the United States — and arugula’s nutritional benefits — led to a surge in arugula consumption from the 1980s, and many of those in the foodie world by that point were Jewish. Yet they were likely unaware that many of their Jewish forefathers had likely eaten the same plant — though in different forms.

What does this little Jewish history of arugula tell us? Well, for one, some pretty surprising foods turn out to be part of the Jewish tradition. In America, the “greatest hits” of Jewish cuisine (and, invariably, the Ashkenazi variety) are the most frequently discussed: matzo balls, latkes, bagels and hamentashen. Yet some foods that are seen as “not Jewish” predate all of these, including arugula. In a way, we learn that many foods can be “authentically Jewish.” But for those of us, including myself, who abhor the word “authenticity,” foods like arugula are proof that…well…the “authentic” does not really exist. It’s just a fad word. The “authentic” always could be not so “authentic” (like latkes!), and the “inauthentic” so very “authentic” (like arugula!). Whatever your opinion, though, it is difficult to deny that arugula and other foods have a fascinating and surprising Jewish history.

I would like to end by opening up to readers: What is your favorite food with an unexpected Jewish history? Write in the comments, in emails, or on social media.

Jonathan Paul Katz is a civil servant in New York City. He also writes at Flavors of Diaspora. This article is in no way connected to his place of employment.