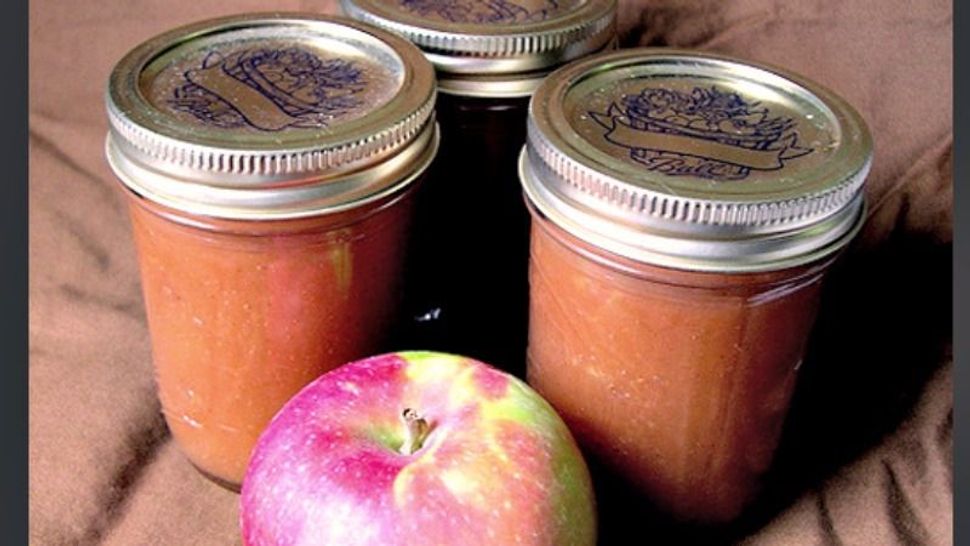 The custom of dipping apples in honey on Rosh Hashanah is so well-established as a symbol of our hopes for a sweet New Year that no matter how we celebrate the holiday this year, whatever foods we serve on this festive occasion, apples are sure to be featured.

Why apples? According to Jewish sources, the apple was chosen because it has the scent of Eden, the First Garden. My infallible source for Jewish cookery, Joan Nathan, puts the kibosh on that idea. Apples, she points out, were originally small and sour, and were not mentioned in the biblical story (“The Jewish Holiday Kitchen”). In fact, although the Garden, as described in Genesis, is impressive (how could it be otherwise, designed by God, the First Horticulturist?) no name is given to either of its central features, two fruit-bearing trees: the Tree of Life and the Tree of Knowledge of Good and Evil.

The first tree, Etz Haim, is a Jewish symbol associated with the study of Torah. The Tree of Knowledge, on the other hand, has acquired a physical identity. The ‘Temptation’ scene, depicted in Western Christian art since the Middle Ages and Renaissance, most often featured Eve plucking and eating a luscious red apple from a heavily laden idealized tree (by then, they had been improved).

A well-tended apple tree is aesthetically pleasing in every way: Its thick trunk, spreading branches and round crown are in perfect proportion, its branches easily supporting the load of fragrant fruits in rosy clusters. Other less convincing candidates for the Tree of Knowledge include pomegranate, citron, mountain ash, quince, apricot and tamarind, but none of them, including the apple, have any basis in the text. The only fruit tree, or the leaves of its fruit, mentioned is fig, which the rabbis of the Talmudic era favored as the Tree of Knowledge, reasoning that “with that which they sinned they repaired their misdeed (Berakhot 40a),” a reference to Adam and Eve (you can be sure it was Eve) sewing together fig leaves to make themselves loincloths (Genesis 3:7). I can’t imagine dipping figs in honey on Rosh Hashanah, no matter their authentic association with Eden.

The earliest source for the custom of dipping apples in honey on Rosh Hashanah seems to be Rabbi David Audraham, a great 14th-Century scholar who lived in Seville and wrote an influential book on Jewish prayers and blessings, explaining the customs associated with them. No doubt he was influenced by the already established idea of the Tree of Knowledge as an apple tree. So, is our custom of dipping apples in honey derived from Western Christian art? Perhaps, but cultural borrowings have been going on for millennia. Over a thousand years ago, the blackberry bush was planted at St. Catherine’s Monastery at the foot of Mt. Sinai to reinforce the tradition that the burning bush, the mysterious plant through which God spoke to Moses in the desert, had grown there since the revelation. The monastery’s source? The rabbis of the Talmud, whose interpretation was metaphorical. They were more interested in the moral and ethical lessons that could be drawn from nature. In this sense, why not the bramble (sneh)?

In any event, apples are not native to Israel but may have been introduced from Iran or Armenia around 4,000 BCE. Since apples do best in cold climates (like New York State, one of the biggest producers in the United States), most apples in Israel are grown in colder areas such as the Galilee and the Golan Heights, although a variety called Anna has been bred to grow in the south of Israel. Despite being a very small apple-producing country, Israeli farmers do produce over 100,000 tons of apples a year and they are always well-represented on the holiday table.

The United States, however, is one of the world leaders in commercial apple production. In New York State alone, there are nearly 700 apple farmers growing more than 10,000,000 trees, enough (so says the New York Apple Association) to make 500 million apple pies! In our area here in the Champlain Valley, apples are bountiful in varieties such as McIntosh, Empire, Red Delicious, Cortland, Honeycrisp, and on and on. Heirloom varieties like Northern Spy, Rhode Island Greening, Macoun can be found at Greenmarket stands throughout the city and at farmer’s markets throughout New York State. Visit the NYAA to find your nearest apple market:

If you don’t live in New York State, rest assured there is probably an apple orchard, u-pick or they pick, near you. Just Google “fresh apples farm markets across the U. S.” At this season, apples are abundant in markets everywhere. They may not have been planted in Eden, but they are a heavenly fruit.

Don’t miss the opportunity to preserve the sweetness of Rosh Hashana by following these unusual and easy ways to preserve the flavor of apples throughout the year. Use really sweet, apples to make these delicious preserves. These directions are adapted from my book “Old-Fashioned Jams, Jellies and Sweet Preserves,” available from Amazon.

A very old-time spread that never goes out of fashion.

1) In a large, wide-mouth preserving pot (I prefer stainless steel), combine apple quarters and cider. Cook slowly for about 2 hours, stirring occasionally to prevent scorching. Add sugar, cinnamon, cloves, and allspice. Continue cooking slowly until thick. Remove butter from heat. Pour into clean hot jars and refrigerate when cool. Makes about 2 ½ pints. If you want to preserve the apple butter longer, pour into hot, clean pints or ½ pint jelly jars and seal with hot canning lids and rings. Process in a boiling water bath for 10 minutes.

Make as much or as little as you want. This is a simple, elegant way to concentrate apple flavor. Try this jam on English muffins.

Apples (the sweeter the better)

In a large, wide-mouth preserving pot (same as for making Apple Butter), boil fresh cider, uncovered, until reduced by half. Stir occasionally. Pare and quarter (no need to peel) enough sweet apples to fill up cider. Stirring frequently with a wooden spoon to prevent scorching. Boil slowly until mixture is the consistency of marmalade. Remove butter from heat. Pour into clean, hot jars, cool and refrigerate, or process as for Apple Butter.

Use ripe or overripe sweet apples. This product has a very concentrated apple flavor, the ultimate preserved apple. Apple leather will keep a long time if it is dried to the consistency of leather.

1) Peel, core and cut up any amount of apples, less than perfect ones are o.k. Place pieces in a large, wide-mouth preserving pot, Add a little water, only enough to prevent scorching. Cover, bring to a boil, stirring often to prevent scorching. Uncover and simmer until apples are soft. Cool.

2) Purée the apples in a blender or food processor until the mixture is completely smooth. Add honey to taste if desired. It produces a softer, more pliable leather. Spread pulp thinly, about ⅛-inch thick, on an edged cookie sheet lined with one layer of heavy plastic wrap. Set pans in an oven at 140° F.

3) Turn fruit when it can be lifted off the plastic without falling apart: it should be barely sticky to the touch and still pliable. Remove plastic and dry the other side of the leather, if needed. When both sides are dried, but still pliable (like leather), roll up the leather in fresh plastic and store in the refrigerator or in jars out of direct light. To use, unroll and cut off pieces with scissors.

Note: Fruit leather will keep up to 1 month just at room temperature, longer in the fridge, and up to a year in the freezer (be sure it’s tightly wrapped).

Jo Ann Gardner is a writer living in the Adirondacks. Her latest book is “Seeds of Transcendence: Understanding the Hebrew Bible Through Plants” (Decalogue Books, 2014), from which this excerpt has been adapted. Her website is www.joanngardnerbooks.com