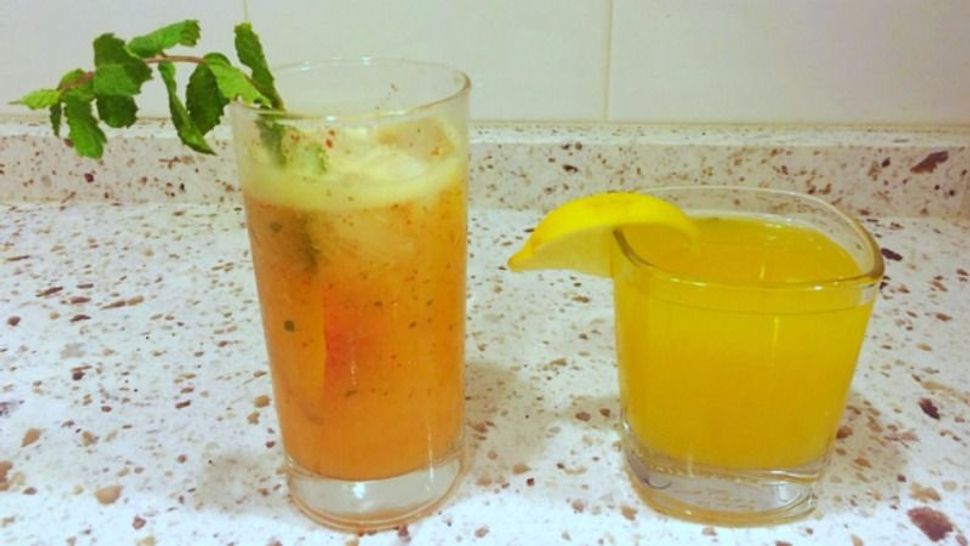 It’s been a tumultuous month — Donald Trump is the next president and Leonard Cohen is dead. And that’s more reason than ever to pour a sweet drink for Thanksgiving. We’ve got you covered, with two dessert cocktails that are just right for the occasion. Each comes with a Jewish twist, made from mahia, the Moroccan Jewish fig liquor that’s a guilty pleasure in North Africa. My sister Rebecca and I created these drinks — the Grapefruit Gobbler and the Trumpcle Antidote — using a bottle of Nahmias et Fils mahia and the sundry products in our kitchen. Here are our recipes.

November is a great time to pick fresh grapefruits and lemons, and that’s the inspiration for our first cocktail, with a base made from the juices of both those fruits.

3) Muddle a shot (1½ ounces) of mahia with a couple of mint leaves, then add to the blender.

4) Pulse the mixture until it acquires an even consistency.

After this election, it’s no doubt that folks are even less in the mood to put up with crazy relatives. This drink will help you tolerate that uncle who voted for Donald Trump. Either it will get him to focus on mixology instead of politics or it will carry you into an inebriated bliss impervious to the most off-color remarks.

1) Pour four ounces of lychee juice into a pint glass. (You can substitute apple juice or simple syrup.)

3) Pour in a shot (1½ ounces) of mahia, and then a tablespoon of lemon juice. Stir the mixture.

4) Serve over ice, garnished with a lemon wedge.