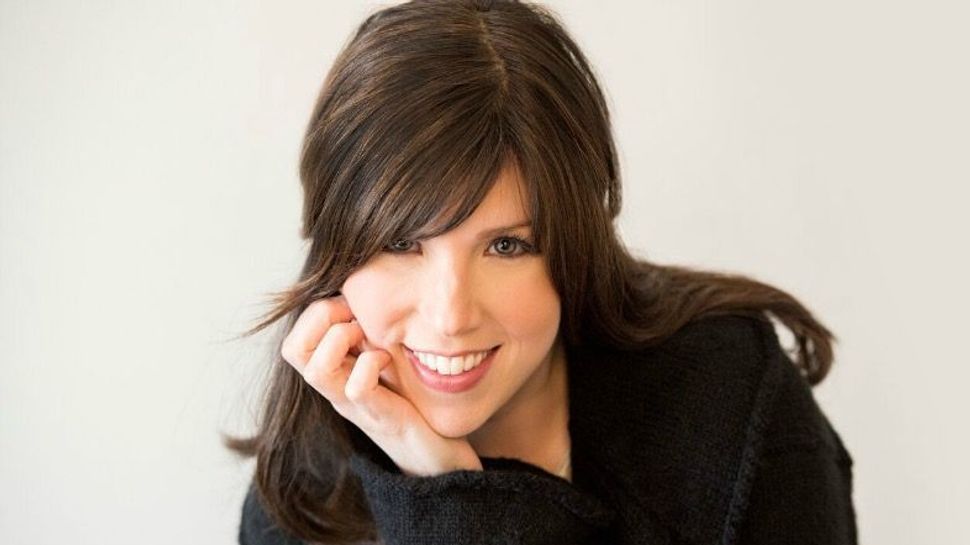 In my new column, exclusively for the Forward, my goal is to share with you exactly how I cook. My most popular cookbook, “Quick & Kosher: Recipes From The Bride Who Knew Nothing” (now in its 7th printing), features glimpses into the story that is my life and my penchant for feeding my family, fast. Almost a decade later, my style hasn’t changed. My life has only gotten busier, my cooking faster and my ingredients fewer.

I grew up with my grandfather reading the Forward in yiddish. The memory of him in his chair with an open paper flashed before my eyes as I recently revisited the idea of writing my memoir, sharing my story — from HBO to the Holy Land. And, I thought, perhaps my new Forward column would be a great place to start writing that book. And so each month I’ll share a potential excerpt from my work-in-progress memoir and two kitchen-tested, five-ingredient recipes (salt, pepper and oil are freebies) sure to make your cooking more inspired, your life more delicious and most of all easier. I still remain the only cookbook author that wants to get you OUT of the kitchen.

I was dressed in black from head to toe — this was the uniform of any self-respecting city girl on the eve of the 21st century. I thought it important to stay true to the dress code and stand in fashion solidarity with all the single ladies in the Big Apple. The world may have been coming to a screeching halt at the stroke of midnight — the Y2K fear was real to some — so at least I’d look fab and fly while floating to heaven to the tunes of Billy Joel.

I had to be going to heaven, right?

I don’t even like Billy Joel. I mean, as a person he might be nice and all but his music sounded so old fogy to my ears. I was raised on 90s hip hop and, a Philly girl through and through, the Roots were my jam (before everyone knew and loved them as the Tonight Show house band).

But I was on assignment. It was New Year’s Eve 1999, it was Billy Joel’s “The Night of Two Thousand Years Tour” at Madison Square Garden and I was the acting producer for Mark Scheerer, music reporter for CNN Entertainment News. I was about 20 and he was about 50 and we were working the hottest ticket in town. He kindly let me bring my best friend Rozanna along as we interviewed Billy Joel backstage, and then the three of us sat in some of the best seats in the house wearing sparkly plastic “2000” glasses while drunk people all around us belted every word of every song. It doesn’t get better than this, we were told. All the while I couldn’t help but feel, hope and secretly pray to G-d it did.

Around 1 a.m. we raced to the CNN bureau — then conveniently located on 8th Avenue just across the street from the Garden — to file our story. We wrote, edited and fed tape to HQ in Atlanta and managed to get highlight footage up in the 2 a.m. hour. By 4 a.m. we had the two-minute piece running on the international news network. At one point I laid myself, cheek down, on the sandpaper-rough industrial carpet of our entertainment new unit floor, exhausted. I slept for a whole two minutes, I think. At 6 a.m., with a rash on my cheek, I dragged myself home.

Home was close. A producer friend of mine and I were renting the weekend anchor’s penthouse apartment just around the corner from the bureau. He was on his third marriage and had moved down to Battery Park City with his new bride, a former Miss-something-or-other. (A trail of failed relationships was all too common in the industry.) And so we were subletting his castle in the sky, living the dream, in the heart of New York City.

At just 21 I had the job of a lifetime, already having attended the Oscars, Daytime Emmys, MTV Music Awards and VH-1 Fashion Awards (where Bono — totally unsolicited — said to me, from behind yellow tinted sunglasses, “Stay innocent my child, stay innocent”). I had interviewed and rubbed shoulders with Eminem, Beyonce, Christina Aguilera, Gwyneth Paltrow, Ben Affleck, Steven Spielberg, Barbara Walters, Janet Jackson, Gisele Bundchen and on and on and on. I went to the award shows, the after parties and the after-after parties. I was the envy of all my friends, who were still in college (I graduated in three years in order to accept this job offer) and I was supposed to be happy, and flying and fulfilled…

These days I am feeling happier and more fulfilled. Living an observant Jewish life with my family in Israel is tremendously rewarding. Shabbos and the holidays are especially helpful when it comes to connecting with my kids and recharging my spiritual batteries. It forces us to stop and find meaning in what can become a mundane hamster-on-a-wheel kind of life, if we all continue to power through at the speed of light, 24/7.

Rabbi Pesach Krohn always says, “You have to disconnect to reconnect,” and that’s what we do on a regular basis, weekly with Shabbos and more often in accordance with the Jewish holiday calendar. Shavuot is one of those special holidays signaling that it’s time to put away the everyday. Lock up your phone (and worries) in a drawer so you can focus on your family and the blessings you have, undistracted.

Shavuot is the culmination of a 49-day countdown that began on Passover, so to say we have been eagerly waiting and anticipating this holiday is an understatement. Make it count this year by cooking dairy as is customary, and connect with your kids by disconnecting. Even if that’s not your customary way of observance it worth a try, as are my recipes below.

Crepes, cheesecake and cool creamy desserts make my heart happy. Five ingredients will make your heart happy. These are easy, non-intimidating, creative ways to fill up that dessert section of your menu.

Jamie Geller is the only best-selling cookbook author who wants to get you out of the kitchen — not because she doesn’t love food, but because she has tons to do. As “The Bride Who Knew Nothing” Jamie found her niche specializing in fast, fresh, family recipes. Now the “Queen of Kosher” (CBS) and the “Jewish Rachael Ray” (New York Times), she’s the creative force behind JOYofKOSHER.com and “JOY of KOSHER With Jamie Geller” magazine. Jamie and her hubby live in Israel with their six super kids, who give her plenty of reasons to get out of the kitchen — quickly. Check out her new book, ”JOY of KOSHER: Fast, Fresh Family Recipes.