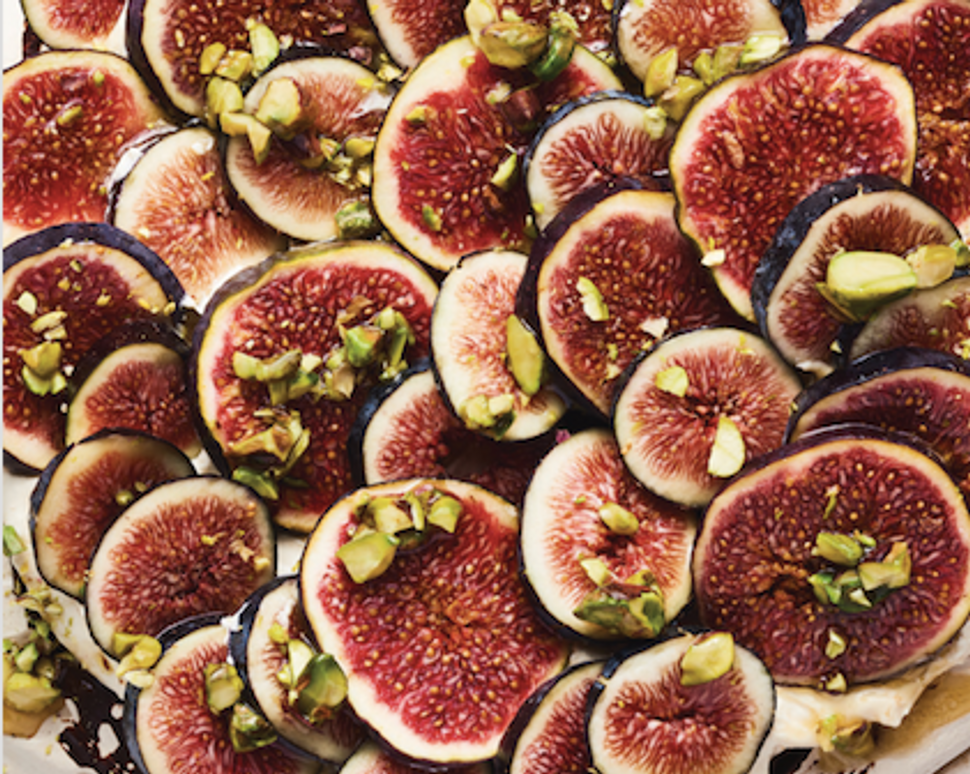 Fresh Figs: One of the seven species of Israel plays a starring role in this cinnamon pavlova with praline cream. Image by Peden+Munk

This is a stunning dessert for a special occasion. It also has a nice element of surprise, as the meringue base is not quite what you might expect: gooey — almost toffeelike — rather than dry and crispy. This is due to the brown sugar in the mix. Combined with the praline cream and fresh figs, it’s absolutely delicious. Pavlova is the dessert to make when you have a bit of time and are feeding people you adore. This recipe calls for sliced almonds, but you can easily substitute chopped pistachios (as pictured opposite).

3) To make the meringue, lower the oven temperature to 250° F. Cover a large baking sheet with parchment paper and trace a circle, about 9 inches in diameter, onto the paper. Turn the paper over so the drawn-on side is facing down but still visible.

4) Pour enough water into a medium saucepan so that it rises a quarter of the way up the sides; you want the bowl from your electric mixer to be able to sit over the saucepan without touching the water. Bring the water to a boil. Place the egg whites and both sugars in the bowl of an electric mixer and whisk by hand to combine. Lower the heat under the saucepan so that the water is just simmering, then set the mixer bowl over the pan, making sure the water doesn’t touch the base of the bowl. Whisk the egg whites continuously by hand until they are [warm, frothy, and the sugar is melted, about 4 minutes, then transfer back to the electric mixer with the whisk attachment in place and beat on high speed for about 5 minutes, until the meringue is cool, stiff and glossy. Add the cinnamon and beat to combine.

5) Spread the meringue inside the drawn circle, creating a nest by making the sides a little higher than the center. Place in the oven and bake for 3 hours, then switch off the oven but leave the meringues inside until they are completely cool; this will take about 2 hours. Once cool, remove from the oven and set aside.

6) Place the chocolate into a small heatproof bowl and set it over a small saucepan of simmering water, making sure the base of the bowl is not touching the water. Stir occasionally until melted. Let cool slightly, then brush the chocolate inside the meringue nest, leaving the top and sides bare. Do this gently, as the meringue is fairly delicate. Leave to set for about 2 hours.

7) To make the praline cream, place the ½ cup toasted almonds on a parchment-lined rimmed baking sheet and set aside. Put the granulated sugar and water into a small saucepan and place over medium-low heat, stirring until the sugar has melted. Cook, swirling the pan occasionally, until it turns into a dark golden brown caramel. Pour the caramel over the nuts (don’t worry if they’re not all covered) and leave until completely cool and set. Once cool, transfer the praline to the small bowl of a food processor and process until fine.

8) Place the cream, mascarpone and pulverized praline into a large bowl and whisk for about 1 minute, until stiff peaks form. Be careful not to overwhip here — it doesn’t take much to thicken up — or it will split. (If this begins to happen, use a spatula to fold a little more cream into the mix to bring it back together.) Refrigerate until needed.

9) Spoon the cream into the center of the meringue and top with the figs. Warm the honey in a small saucepan and stir in the ¼ cup almonds or pistachios. Drizzle these over the figs and serve.

Make Ahead
The praline (after pulverizing but before it’s mixed with the cream) can be made up to 3 days in advance and stored in an airtight container. The meringue needs to be made in advance — it takes 3 hours to cook, 2 hours to cool in the oven and another 2 hours to set, so you’re forced to get ahead by at least this much — but it will also keep for up to 3 days wrapped loosely in aluminum foil.

Storage
Once assembled, the pavlova should be eaten as soon as possible. It will hold for a couple of hours, but it won’t look as good after that.