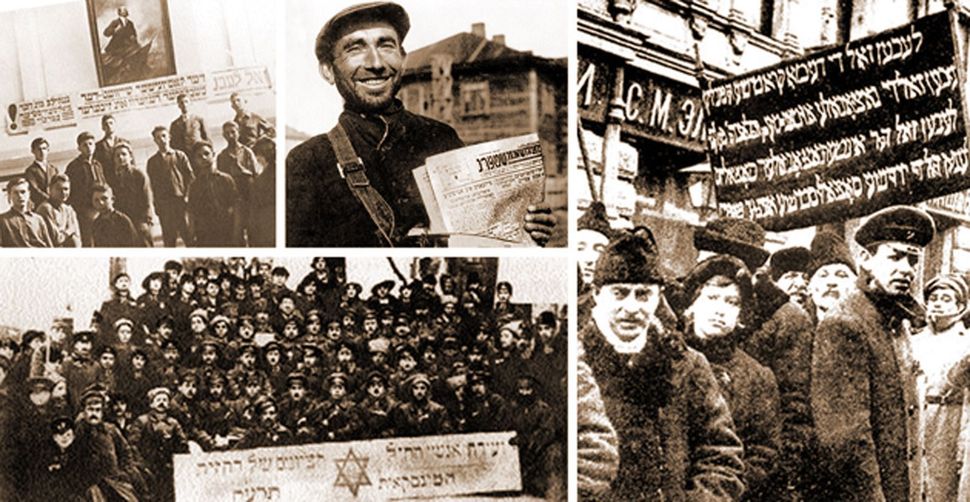 As I sit there, taking notes, I feel like I’m back in college, eagerly soaking up facts and analyses provided by the invited scholars. It’s also an opportunity to chat with fellow participants who happen to share my interests.

Sometimes, though, a conference is even more than this – so informative and fascinating that it actually changes the perspective of the participant. This was what happened to me while participating in a two-day conference held at the YIVO Institute for Jewish Research last month called “Jews In and After the Revolution of 1917”.

The event, organized in conjunction with the 100th year since the revolution, brought together a slew of experts in the field, including Samuel Kassow, Elissa Bemporad, Kenneth Moss, David Fishman, Cecile E. Kuznitz, and Gennady Estraikh, to provide us with a rich portrait of Jewish society in the Soviet Union during the 1920s and 30s.

My biggest surprise was how little I knew about that period.

Estraikh, professor of Judaic Studies at New York University and one of the speakers at the conference, has written before about his students’ complete lack of knowledge about the history of the Jews in the former Soviet Union, even among the graduates of yeshivas and modern Jewish day schools.

I now realize that it isn’t just the Jewish day school graduates, but even people like me who attended daily Yiddish afternoon schools; mitlshul [Yiddish secondary school] and even the Jewish Teachers Seminary, know very little about that chapter in Jewish history.

This isn’t meant to be a critique of the longtime venerable Yiddish school system. Despite the fact that these were just supplementary schools (5 afternoons a week after public school, and later – just 3-1/2 hours on Sundays), we students were provided with an excellent education in Jewish history. We learned about famous Jewish figures from the Middle Ages to the nineteenth century; the Jewish governing body in Poland; the Pale of Settlement in Imperial Russia; the power struggle between the Hasidic religious movement and their Lithuanian opponents; the Enlightenment; the blossoming of Yiddish literature; the history of Zionism and Bundism; World War I, the mass immigration to America and, of course, the Nazi genocide of the Jews.

I do remember learning two things from my teachers about Jewish culture in the Soviet Union. One was that Soviet Jews wrote Hebrew-derived words phonetically instead of maintaining the traditional Hebrew spelling, and did away with the final forms used for the Hebrew letters khof, mem, nun, fey and tsadik. I also learned that Stalin massacred 24 prominent Yiddish writers and cultural figures in 1952. But because there was never any course given on the history of the Jews in the USSR, we had no context in which to understand the milieu in which Yiddish writers and cultural leaders had tried to maintain their Jewish identity.

One reason for this could be that during the Cold War, little was known globally about what was happening behind the Iron Curtain. Much of the information presented at the YIVO conference comes from archives which were made available only after the fall of the Soviet Union in 1989.

Secondly, conventional wisdom has it that the Jews in Russia warmly embraced Bolshevism, naively believing that this would usher in a golden age. But most of the lecturers at the conference argued that this was simply not true. In the beginning, most Jews were very skeptical towards the Bolsheviks, and even supported the White Army (led by the former officers of the Czarist empire) over the Red Army, until they discovered that the Red Army leaders would punish the perpretrators of the pogroms whereas the White leaders did not. Seeing no alternative, the Jews decided to ally themselves with the Bolsheviks, hoping this would be “better for the Jews”.

Although the Russian Revolution caused much bloodshed it amazingly led to a blossoming of activity among the Jews. Yiddish and Hebrew day schools were established. Educated Jews were encouraged to lead expeditions to the shtetlekh (Jewish towns) to collect information about the various traditions and folkways of everyday Jews and about the ways that the pogroms had affected their societies. Besides Sh. An-sky, the author of The Dybbuk” whose expeditions are well-known, similar projects were led by the Yiddish poet David Hofstein and fiction writer Itsik Kipnis.

In the meantime, Kiev became the center of the so-called secular Yiddishist experiment. The Yiddish writer, Der Nister, translated the tales of Hans Christian Andersen into Yiddish, even holding on to its Christian elements in order to acquaint the Jews with world literature and thereby create a new age of Yiddish culture completely freed from a Jewish religious context. He believed that language ought to be merely a container freed from any external prescriptions or identity.

The experiment failed, of course, because eventually, Jewish Communists eagerly transformed Yiddish into a container serving their own ideology, as seen in the countless propaganda books for Jewish children and adults published throughout the Soviet era.

Another fascinating topic covered at the conference detailed how observant Jews were able to maintain a religious community, complete with prayer houses and mikvahs, even after the pogroms had dispersed them throughout the USSR. This is especially surprising, taking into account the government ban on public religious expression. This feat was accomplished by one man, the Lubavitcher Rebbe at the time, Joseph Isaac Schneersohn, who did everything possible to maintain a connection with the far-flung rabbis, through a steady correspondence with each one of them, inquiring how things were going and how he could help them.

In 1922, the Rebbe founded a committee to provide the rabbis with all they needed: funds, religious objects, personnel, even legal advice for those who had been arrested. He advised the observant Jews to become craftsmen so that they could work at home, thereby avoiding any possible violations of the Sabbath or Jewish holy days. He was so committed to preventing the religious Jewish community from going under that he even forbade his students to emigrate to the Land of Israel. “Make this the Land of Israel,” he commanded.

The result of his actions revealed a historic irony: before the revolution, the Hasidim would come to the Rebbe’s court. Now, through his letters, the Rebbe was “coming” to his Hasidim.

Another interesting point covered was the relationship of YIVO, then based in Vilna, to the Soviet Union. Although Jewish Communists had already begun pressuring YIVO to produce proletarian scholarship, YIVO consistently refused to allow politics to enter its corridors. When Jewish Communists at a YIVO conference in 1931 declared the traditional Yiddish spelling “bourgeois” and called to start writing all Hebrew-derived words phonetically, YIVO leaders balked at this radical position. Quietly, though, they admitted feeling envious that the Soviet government was able, in one shot, to mandate a uniform spelling system in all Yiddish schools – a power that YIVO never had.

Seeing how much I learned in those two days has proven to me just how much YIVO can accomplish when it assembles a cadre of talented academics to teach us, the general public, consequently deepening our understanding of our unique Jewish heritage.