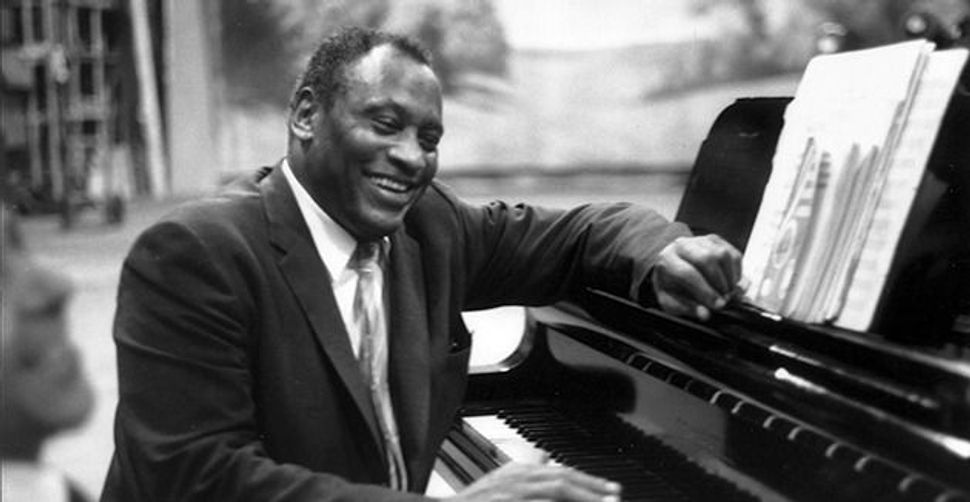 The American singer Paul Robeson is mostly remembered today for his hauntingly beautiful bass voice, his groundbreaking career as an actor and as his political activism and involvement in the Communist party. Often forgotten is his mixed and tragic role in Yiddish literary history.

Besides his musical talent, Robeson was also a polymathic child prodigy. A renowned athlete who played football at Rutgers, he was one of the first African-Americans to break the color barrier at an American university. Between his subsequent studies at Columbia University’s Law School and his simultaneous career in the National Football League, Robeson somehow found the time to intensively study dozens of foreign languages, managing to gain proficiency in more than 20 of them.

Although Robeson sang in more than 50 languages, including many he didn’t speak at all, he became fluent in more than 10, among them Russian, French, Spanish, Chinese and German. He began studying Yiddish informally while at Columbia and continued learning the language in London, as well as on several trips to Poland and the Soviet Union before World War II. Although he never achieved the same level of fluency in Yiddish as he did in his strongest languages he was comfortable speaking and reading it.

Robeson often featured Yiddish songs in his concerts. Above is a recording of the folksong, “What the Czar’s Life is Like,” a selection that was well suited both to his bass voice and his political leanings. The video, with English subtitles, was made by the Yiddish folksinger and ethnomusicologist, Jane Peppler.

Robeson is known to Yiddish readers because of his friendship with the Yiddish poet Itzik Feffer, whom he met in the early 1940s, and their appearances together with members of the Jewish Anti-Fascist Committee, which included many leading Soviet Yiddish writers. In 1949, when Robeson made a visit to the USSR, he requested to meet with Feffer. Robeson was told that Feffer was on vacation in Crimea but in truth, the poet had been arrested by the Soviet Secret Police two years earlier and was languishing in jail. Because he had been starved and was in poor health, Soviet police officials used their cover story to buy several days in which to feed Feffer so that his appearance would not alarm Robeson. Upon seeing his longtime friend, however, Robeson was not fooled. Despite being watched by Soviet agents, Feffer was able to tell Robeson that he and other prominent Jewish writers were under arrest and that his colleague Solomon Michoels, the former head of the Jewish Anti-Fascist Committee and the USSR’s State Yiddish Theater, had been assassinated.

Despite stern warnings not to perform any songs with “Jewish nationalist” content, Robeson reacted to his meeting with Feffer by singing the Holocaust-era Partisan Song “Zog Nit Keynmol” at a prominent Moscow concert that was broadcast live on the radio throughout the USSR. The defiant performance was understood by millions of radio listeners to be a public expression of solidarity with the Jewish people.

Upon returning to America, however, Robeson, who was a supporter of the Soviet regime, denied that Soviet Jewish intellectuals were being repressed. Feffer, along with a dozen other prominent Yiddish writers and actors would be executed on August 12, 1952 in Moscow’s Lubyanka Prison in what would become known as the “Night of Murdered Poets.”