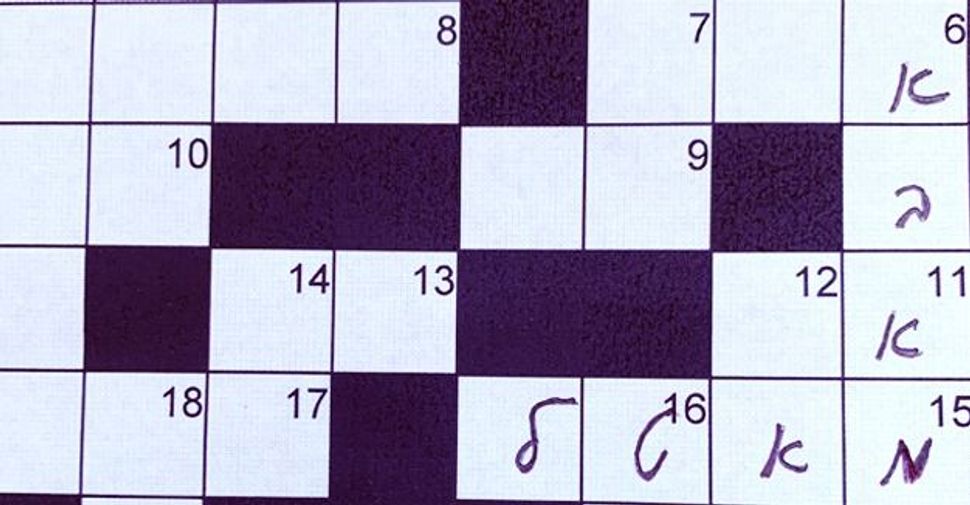 Clue 15 refers to a beloved protagonist of a Sholem Aleichem novel. Image by www.crauswords.com

Thanks to a generous donation to the Forverts by an anonymous donor, the Forverts has launched a biweekly Yiddish crossword puzzle. The puzzles include clues about Yiddish words and literature, Jewish traditions and pop culture. The first puzzle can be seen here.

The donor, a Jewish philanthropist, is an avid crossword puzzle fan.

Meena Viswanath, a Yiddish-speaking engineer educated at MIT and Georgia Tech, is the creator of the puzzles. She is a lifelong fan of word games. As a child she solved the Forverts Yiddish-language word searches and now completes the New York Times crossword puzzle every week.

While crossword puzzles became a national obsession in the United States in the 1920s, there doesn’t appear to be a crossword puzzle tradition in Yiddish. Word searches and logic puzzles were common in prewar Yiddish newspapers and children’s magazines on both sides of the Atlantic, but crossword puzzles don’t seem to have been a regular feature. They did appear from time to time in several postwar Yiddish publications, including Yugntruf, but there has been no regular Yiddish crossword puzzle feature until now.

While many Hasidic Yiddish publications feature word searches, logic puzzles, sudoku games and trivia questions, none of them are crossword puzzles in the strictest sense. These games, collectively called kestl-retenishn (box riddles), are a popular pastime in many Hasidic homes.