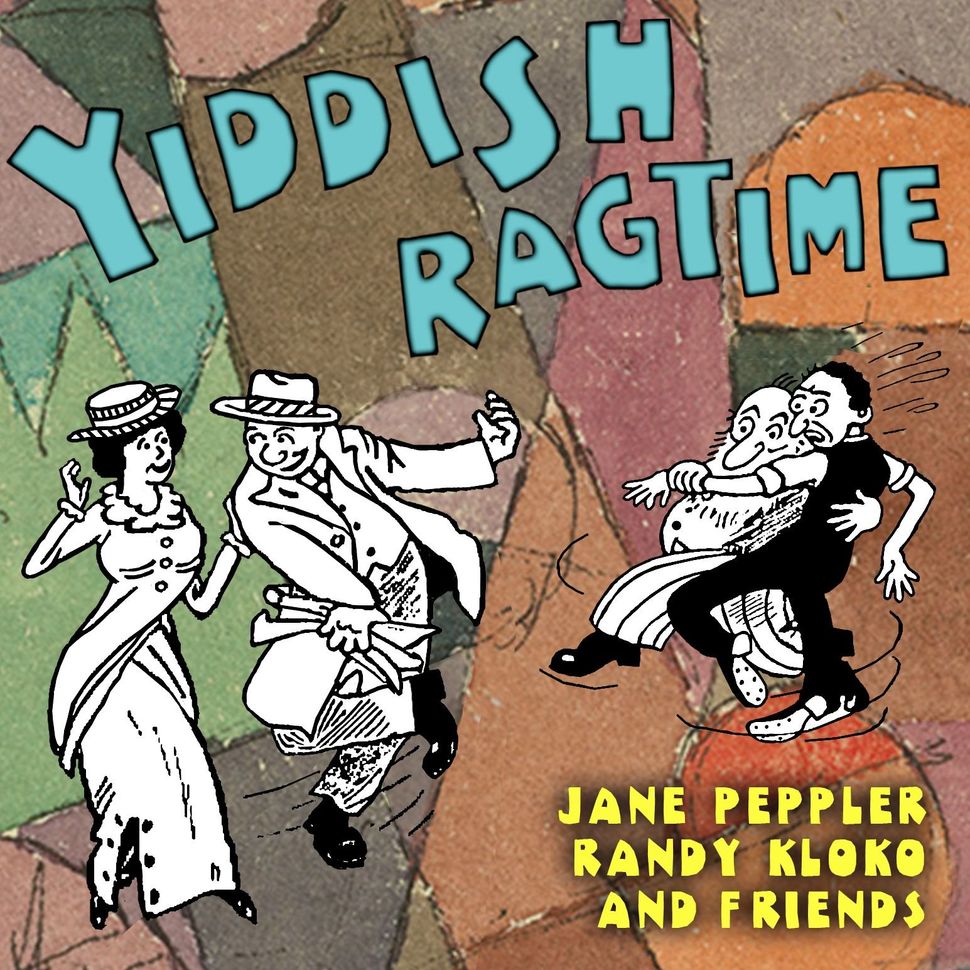 “In the 1890s, writers of Yiddish melodramas simply took famous, successful American popular songs and set Yiddish texts to their melodies,” N.B. Minkov wrote in “Pionern fun der Yidisher Poezye in Amerike,” or “Pioneers of Jewish Poetry in America” (1956). “This was a big hit with the wide-ranging audience of Jewish immigrants… For future historians studying Jewish immigrant life in America there is a ready-made treasure of material in these texts.”

I first became familiar with the songs Minkov wrote about after, a couple of years ago, I found a copy of “American Yiddish Penny Songs by Morris Rund and Others,” a collection of 200 songsheets sold by street peddlers between 1895 and 1914, and made a recording of some of its contents. The London klezmer singer and music researcher Dr. Vivi Lachs came across my record, and sent me some 20 issues of the periodical Lider magazin, or The Song Magazine, which had been issued a bit earlier than the Morris Rund penny songs. She had found them at YIVO, and they contained the very same songs Minkov wrote about.

As Minkov wrote, they reveal a great deal. 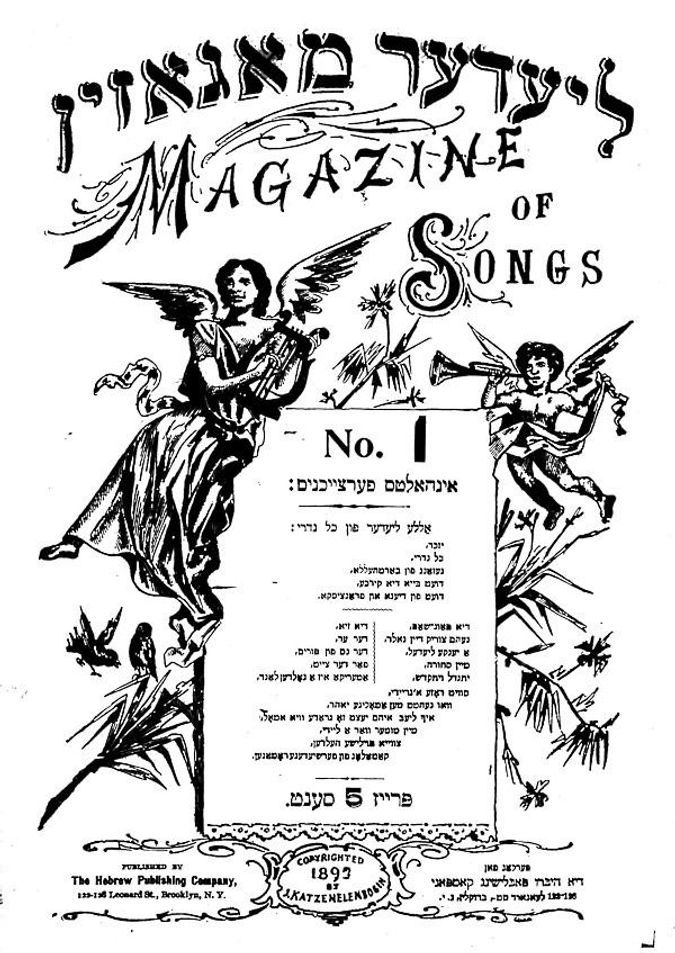 Lider magazin was issued by the Hebrew Publishing Company in Brooklyn, but publisher Judah Katzenelenbogen collected the songs and held the copyrights. Katzenelenbogen was born in 1863 in Vilne, where his family had been publishers for decades. In 1887 he emigrated to the United States, and soon afterwards his bookshop on Canal Street became a cultural center.

In 1887, seeing that music publishing was profitable for American publishers, Katzenelenbogn published Avrom Goldfaden’s popular Yiddish lullaby “Rozhinkes mit Mandlen.” It sold extremely well, so he began publishing other song lyrics. In 1897 he published a book called “Di yidishe bine” (“The Yiddish Stage”), which he described on the cover as including “Theater couplets, worker- and folk-songs, and recitations, collected by Judah Katzenelenbogen and published in honor of the twentieth anniversary of Yiddish theater.”

He subsequently began publishing Lider magazin. Every issue contained lyrics from an operetta and parodies of American hit songs, as immigrants very much wanted to sing the songs they heard in the streets and music halls. Jewish publishers and theater stars hired coupletists, who specialized in witty songs generally used as a transition between cabaret numbers, to create these parodies. As Bessie Thomashefsky sang in her rendition of the vaudeville hit”Get Your Money’s Worth”:

Nevertheless, almost half of the lyrics were created by only two coupletists, Isaac Reingold and Louis Gilrod, who wrote hundreds of Yiddish lyrics to “Tin Pan Alley” melodies. None of the parodies were ever recorded. 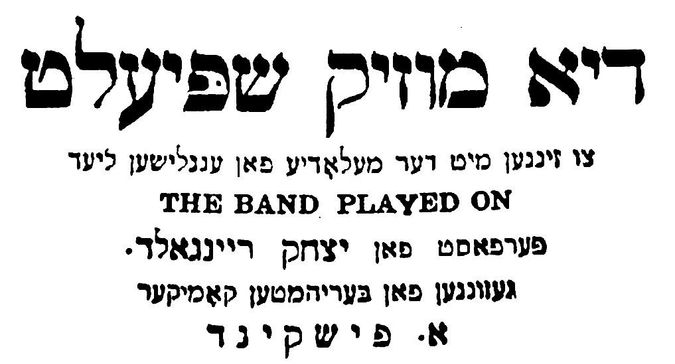 “Tin Pan Alley” refers to the group of New York music publishers and composers who dominated American popular music at the turn of the 20th century. Their studios were on West 28th Street between 5th and 6th Avenue. As the composers wrote their songs, the sound of pianos rang out through the open windows onto the street, literally like a concert of tin pans.

Jewish coupletists abandoned the American subjects of the songs — sentimental stories about innocent small-town girls, etc — and wrote instead about, for example, the plight of the workers, as in “Tear down the castles/locks,” which you can listen to here, sung to the tune of George M. Cohan’s 1904 hit, “Give My Regards To Broadway.”

Satirical stories of swindlers, allrightniks, boarders and the abandonment of the Jewish faith were also popular.

At the same time, gentile composers and audiences were tiring of their own music, and they began imitating the music and vaudeville shtick of the Germans, Irish, Jews and African-Americans.

It was African-American pianists who first played the syncopated “ragged rhythms” that came to define ragtime. Those songs spurred their own Yiddish parodies, including one in which Hyman Meisel declares:

When the day comes to choose a president
The Republican shouts “vote for me!”
“He’s no good!” the Democrat shouts over there.
All the presidents are the same to me.

New copyright laws of 1909 increased the power of American publishers, and gradually the wholesale theft of melodies was curbed. In time, gradually assimilating immigrants no longer sought out these parodies, and the strange hybrid songs were forgotten.

But I’m a fan of those ignored, forgotten songs, and agree with what Khonen-Yankev Minikes wrote in his introduction to “The Yiddish Stage.”

“There are certain songs in this book about which some critics will find fault,” he wrote. “We have, however, published them all. We wanted to provide a complete collection of what existed, so that future writers of Jewish-American history will have access to all the material, both the good songs and the bad. If the people accepted them, they are important.”