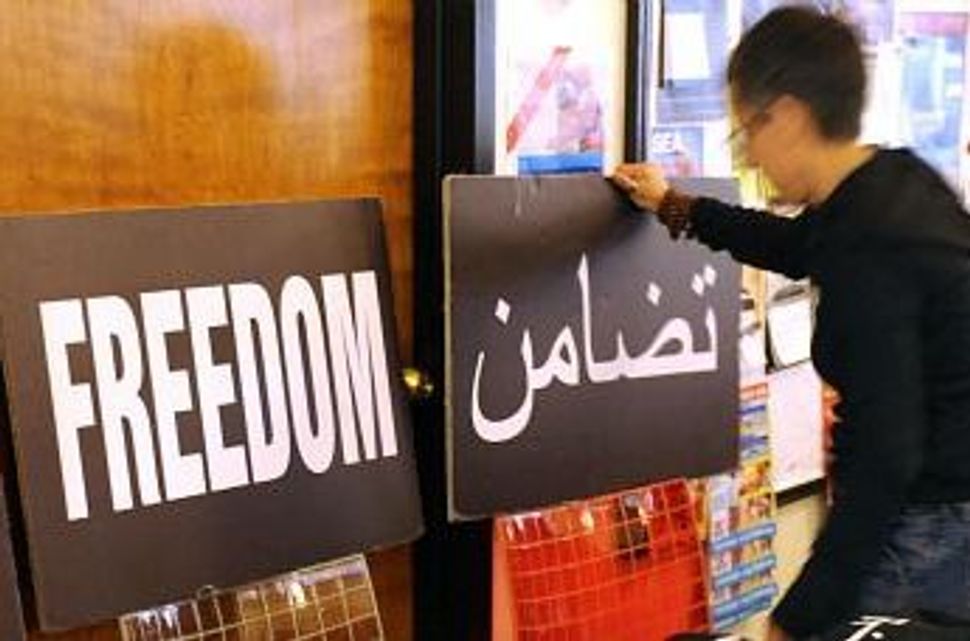 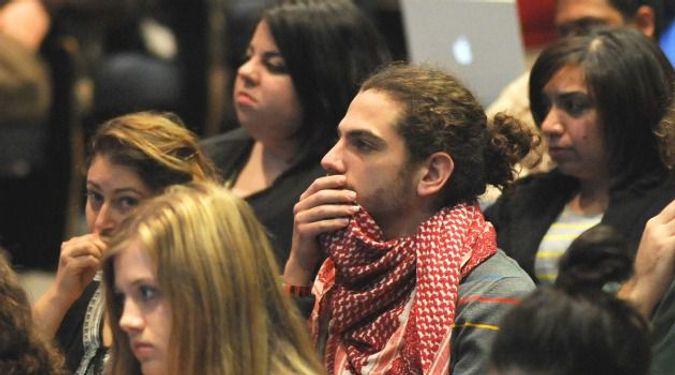 Showing ?Human Face?: Organizers encourage boycott Israel activists to frame their push in the language of the mainstream American left. They hope to avoid being marginalized as a radical fringe group. Image by peter tobia

The movement to boycott, divest from and sanction Israel — long painted as a fringe group by the Israel advocacy community — is seeking to wrap itself in the mantle of the mainstream American left. At the movement’s first-ever national conference, presenters and attendees compared BDS to the Montgomery, Ala., bus boycott, the Cesar Chavez grape boycott and the anti-apartheid movement in South Africa, from which it draws inspiration.

They also worried about how to brand themselves in easily accessible sound bites.

“Palestine has to become part of the American vocabulary in the way Americans learn about and digest information, like in the kinds of magazines you read in the laundromat,” said Sarah Schulman, a professor of English at the City University of New York who spoke at the conference, held at the University of Pennsylvania the first weekend in February. “We have to brand BDS as something alive, progressive, increasingly available, with a human face, something Americans can relate to.”

But Penn’s Israel advocacy community greeted all this with a cold shoulder. Rather than protest the event, Rabbi Mike Uram, director of Penn Hillel, urged the group’s pro-Israel member organizations to steer clear of the program, lest they legitimize the BDS movement by drawing attention to it.

“On Penn’s campus, people don’t know what BDS is,” Uram said. “To engage in a conversation is to raise them to a level that they are not at.”

“Spending our time and resources and efforts standing outside, protesting the event, says that this is mainstream political discourse,” added Noah Feit, a sophomore who is president of Penn Friends of Israel. “We decided not to stage a protest, because we prefer not to legitimize radical political discourse. We think there are better and more effective forums to express our opinions.”

This contrast — a nascent pro-Palestinian movement craving legitimacy, with the Jewish establishment ignoring it — was a surprising outcome of what some had expected to be a volatile few days on an Ivy League campus with a large percentage of Jewish students and graduates. Area Jewish leaders had signed on to advertisements decrying the conference; some criticized the university for even allowing it to occur.

For the Israel advocacy community, BDS represents a threat to Israel’s sovereignty as a Jewish state. The movement was founded by Palestinian civil society organizations in 2005 after the International Court of Justice, the judicial body of the United Nations, deemed Israel’s separation barrier to be illegal. The barrier, which Israel justifies as a security measure, departs at numerous points from Israel’s pre-1967 border to take in land deep in the occupied West Bank. BDS centers on three demands: an end to the occupation of Palestinian territories and the dismantling of the barrier, the recognition of rights of Palestinians living in Israel proper and the right of return for Palestinian refugees.

At the conference, which was organized by the 15-member Penn BDS group, there was talk of positioning the initiative as a democracy movement. A student activist media handbook circulating at the conference admonished BDS proponents to “infuse our language with values like freedom, equal rights, democracy, etc. This allows you to speak to Americans in terms they understand. Most can’t define Zionism, but freedom and equality are easy terms for most people to conceptualize. Emphasizing shared values also allows you to connect with Americans on both an emotional and intellectual level.”

That message was echoed by Ali Abunimah, a Palestinian rights activist and co-founder of the Electronic Intifada website. “We are fighting for rights people have fought for all over the world,” Abunimah said in his well-attended keynote speech. “We have to link this struggle to so many other struggles in this country and around the world.”

In formulating a response to Penn BDS, Philadelphia’s Jewish community at first split on whether it should ask the university to reject the conference outright or counter the initiative with its own programming.

Some, like Rabbi Neil Cooper of Temple Beth Hillel-Beth El in Wynnewood, railed against the university for allowing BDS to come to campus. “I believe that, in the future, this conference at the University of Pennsylvania will be identified not only as a political gathering but as a movement grounded in and supported by the worldview of academia,” he wrote in an email to his congregants. According to Penn’s student newspaper, The Daily Pennsylvanian, several major donors threatened to withdraw their support of the university should the conference go forward there.

Though a staunch supporter of Israel, Harvard law professor Alan Dershowitz affirmed the BDS movement’s right to be on campus, saying that had the university rejected it, he would have defended it on free speech grounds.

Dershowitz spoke before an audience of 900 people at Penn the night before the BDS conference was scheduled to begin, in an event hosted by the Jewish Federation of Greater Philadelphia along with several other on- and off-campus Jewish groups. “We are going to win this encounter,” with BDS, he said.

After the Dershowitz speech, Penn Hillel threw a fundraiser for an Israeli charity at a bar near campus; the next night it ran a series of dinnertime conversations about Israel, “Israel Across Penn.”

A brief flare-up occurred when Ruben Gur, a Penn psychiatry professor, wrote an op-ed in The Daily Pennsylvanian, calling the BDS proponents “Nazis” and their Jewish backers “Capos”— a slam that Abunimah and others said only distracted from the issues.

But when Penn BDS kicked off, there was nary a protester in sight. And that was a good thing, said Geri Palast, head of the Israel Action Network, a group countering delegitimization on campus and beyond. “While we may disagree with people, it is not in our interest to try to squelch the speech,” she said. “It really turns the opposition into a martyr, and we don’t need that.”

Even Cooper has since changed his tune, writing about BDS in another upcoming newsletter that he shared with the Forward: “When our enemies attack, we might, at times, be better advised to strengthen and build up ourselves rather than engaging in battle.”