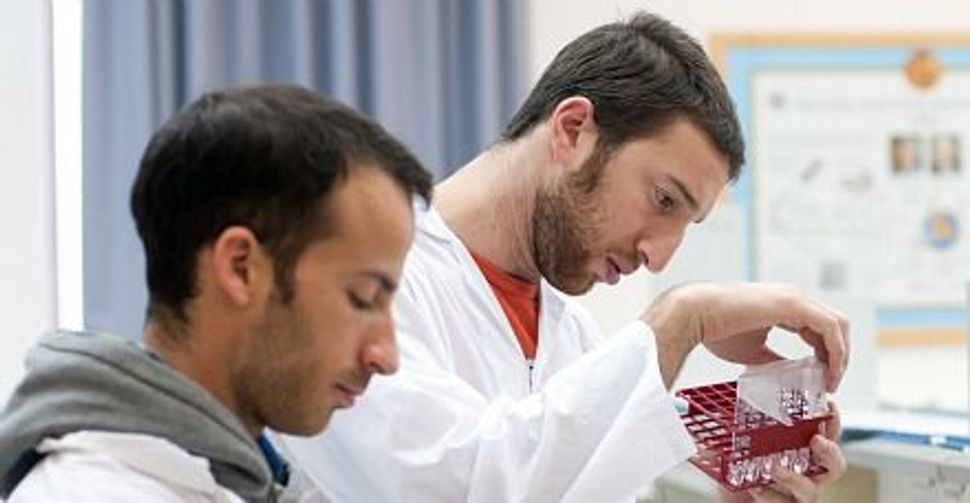 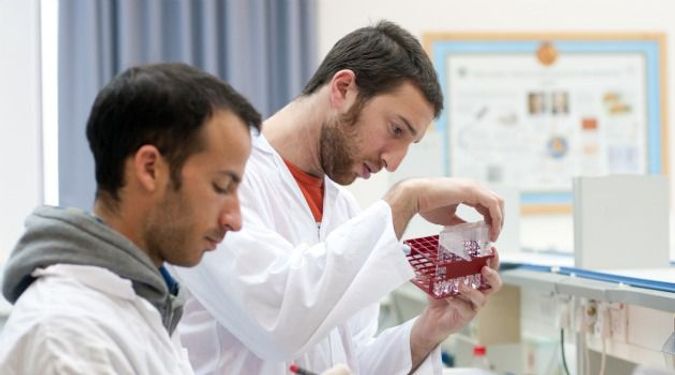 Say What? A dispute is raging in Israel over the use of English in academic research. Some would prefer to see only Hebrew used. Image by nathan jeffay

Israeli scholarship is widely cited the world over. But if state linguists have their way, much of that research will become a whole lot less accessible to those who don’t speak Hebrew.

The Academy of the Hebrew Language is asking the Education Ministry to require universities to use less English — the language in which many graduate-level courses are taught, and in which much of Israel’s scientific research is conducted.

“We would like to see a situation where teaching must be in Hebrew for all courses, with only very particular exceptions,” such as those for foreign students, Gabriel Birenbaum, a senior researcher at the Academy, told the Forward.

Much like France’s famed Académie Française, the Academy of the Hebrew Language, is in charge of developing the language and encouraging its correct use. What makes Israel’s Academy, the AHL, unusual is that it is essentially the same body that brought English into use.

In 1890 Eliezer Ben Yehuda, the key architect of Modern Hebrew, established the Hebrew Language Committee to oversee the revival of the ancient tongue. After Israel became a state, the government transformed the committee into the AHL. The government-funded body’s 23 members and 15 advisers are scholars, writers, poets and translators.

Education Minister Gideon Saar, who chairs the Council for Higher Education, which is in charge of the country’s universities, has asked the council to come up with a position statement on language use in universities.

And this has many academics worried.

“Hebrew is the language of the Jewish People, but if you write your thesis in Hebrew, it is buried,” said Yehuda Band, who heads the chemistry department at Ben-Gurion University of the Negev. Last fall, Band had informed postgraduate students that English was to be the default language for written work.

He added that pushing students to write in English not only helps them to get their theses read and published, but also benefits their career trajectory. “A student who can’t write in English is severely limited — it’s the language of science,” Band said.

The new battle is essentially round two of a war fought a century ago. In the early 20th century, when the Hebrew language was newly revived, leaders of the Zionist community campaigned to get all educational establishments in what is now Israel using it.

When the Zionist movement was established in the late 19th century, it was not immediately clear that Hebrew would be the language of Jews in Palestine. Theodor Herzl, the movement’s leader, initially thought it would be German. When pioneers arrived, many just spoke only the language they brought with them — often Yiddish — and it was not until the second aliyah, between 1904 and 1914, that Hebrew started to become dominant.

When the Technion — Israel Institute of Technology ­— prepared to open in Haifia 1913, it had planned to operate in German because its leaders said that Hebrew simply didn’t have the words to teach science. But the school, caving to pressure from ideologically driven students and Zionist leaders, adopted Hebrew as its language of study.

Today, though, postgraduate courses at Technion are most commonly taught in English. The Forward contacted all seven Israeli universities for this article and all confirmed that they had classes taught and coursework assessed in English.

Although the trend toward English is mostly at the postgraduate level and primarily in the natural, physical and computer sciences, English is also being used more widely in undergraduate studies and in humanities courses at all levels. In most institutions, there is an unwritten understanding that lectures, classes and seminars switch to English when there is a presence of one or more non-Israelis, though the natural sciences faculty at Ben-Gurion recently formalized this rule.

At Tel Aviv University seven humanities undergraduate programs — including archaeology, Jewish history and East Asian studies — include courses and related assignments in English. And the Hebrew University of Jerusalem recommends that students complete at least one course taught and assessed in English. The school’s rector, Sarah Stroumsa, told the Forward that she would like to see the recommendation changed to a requirement.

In the so-called “Language War” of the early 20th century, some prominent scientists were among the campaigners for Hebrew-only. But a century later, the scientific community is almost unanimously against this approach. Should the Education Ministry demand that scientific institutions and university programs scale back on English, a clash between government and academia is likely to ensue.

“I’m unabashedly Zionist and believe in Israel as the nation state of the Jewish people and all that that entails with symbols and language,” said Moshe Koppel, a Likud party member, and a computer scientist at Bar-Ilan University in Tel Aviv. “But since all the [computer science] publications are in English and we expect students to publish their theses, it would be double the work for them to write it in Hebrew and translate to English.”

As far as the AHL is concerned, the gains of a century ago are simply being lost. “In those days you could understand them [the Technion board in 1913], as it really was the beginning of Hebrew’s revival and many words were lacking, but they managed,” the Academy’s Birenbaum, said. “But today, when Hebrew is much richer, we have this deterioration toward English.”

He insisted that the AHL is “not against English,” but believes that its use must be limited to “maintain respect for our own language.”

Moshe Vigdor, director-general of the Council for Higher Education, which is looking into the subject for the education minister, told the Forward that his organization aimed to find a “real pragmatic balance.” He indicated that the council may be leaning toward some limitations on English. “We want to see that master’s degrees [theses] will be in Hebrew and with [some] English or translation to English, if necessary,” he said.

Ben-Gurion’s Band dismisses the idea that the increased use of English has put in danger the gains made in 1913. “In the early 1900s, the language was not established in the country,” he said. Today, Hebrew is the language of the country. There’s no question about that, and our decisions are not going to change that.”