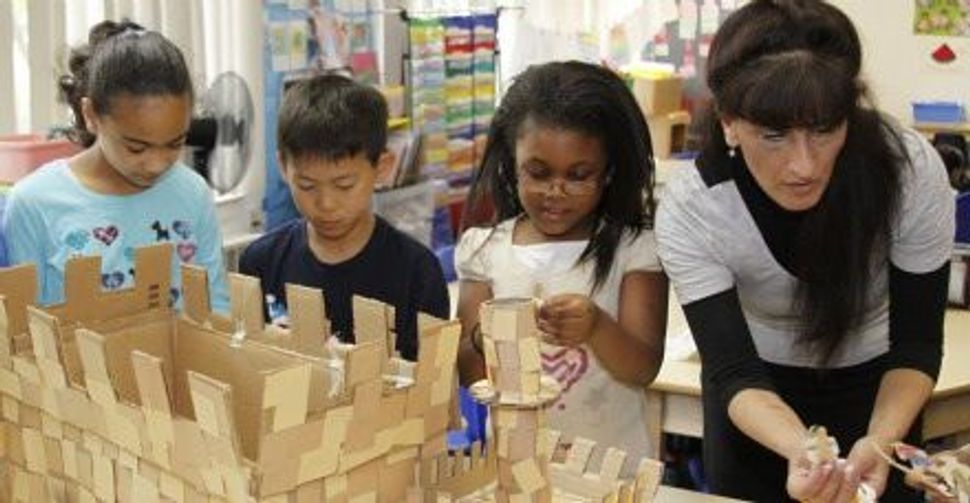 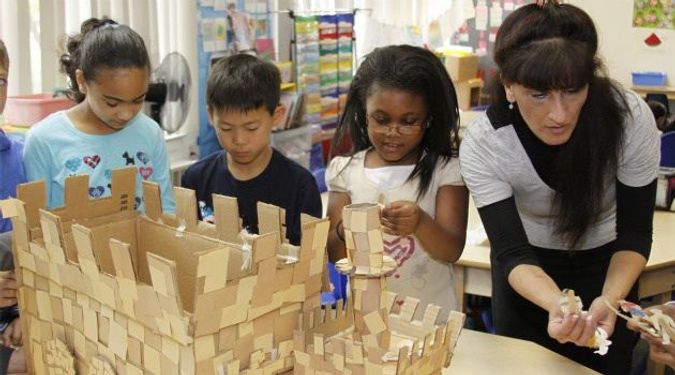 Hebrew-language charter schools — long viewed by some critics as a Trojan horse for bringing religion into taxpayer-funded schools — gained a new level of acceptance when the Washington, D.C., school board recently approved the first Hebrew language school in the nation’s capital.

“There is a compelling case for the advantages of bilingual teaching, and it doesn’t matter if it is Chinese, Spanish or Hebrew,” said Scott Pearson, executive director of the District of Columbia Public Charter School Board, which approved the Sela Public Charter School on April 23. “If there would be a good proposal for an Ancient Greek school, we’d probably approve it, too.”

Yet, as Hebrew charters have overcome stereotypes of being parochial Jewish institutions, they’ve also positioned themselves as more than just schools. Many, though not all, Hebrew charters see themselves as fonts of Israel education that will cultivate students — both Jews and non-Jews — to serve as goodwill ambassadors for Israel in the years ahead.

“I often dream of what the graduates of our Hebrew-language charter schools will look like 20 years from now,” wrote Sara Berman, the chair of the Hebrew Charter School Center in the Spring 2011 issue of Contact, the journal of the Steinhardt Foundation for Jewish Life. “I see them as a vanguard of understanding for Israel and for cultural respect in general.”

Charter schools are publicly funded but privately sponsored primary and secondary schools that pledge, in exchange for their taxpayer support, to meet certain standards put forth in charter agreements with state or local education boards. Many also receive private funds from their sponsoring institutions. Most charter schools operate on a lottery system; families who want to send their children to the schools are picked at random.

Berman’s New York-based Hebrew Charter School Center — arguably the most successful of the Hebrew charter networks — has provided seed money and training for four up-and-coming Hebrew charters, including the new Washington school, which is slated to open in 2013. In an interview, Aaron Listhaus, HCSC’s executive director, said he “couldn’t really say” if the Hebrew charters were meant to burnish Israel’s public image at a time when the Jewish state is facing increasing international criticism. “Our kids, we believe, have an affinity for Israel through the curriculum,” he said.

On the school level, administrators were more explicit. One goal of the curriculum at Brooklyn’s Hebrew Language Academy — HCSC’s first school — “is to foster a love for the country of Israel in all of its diversity,” said Principal Laura Silver.

At HLA, whose 306 students are 45% non-white, the Israeli flag hangs alongside the Stars and Stripes. (The proportion of Jews in the school is unknown as U.S. Department of Education rules prohibit enrollment policies and statistical tracking of students on the basis of religion.) Students at HLA and Hatikvah International Academy, another HCSC charter in East Brunswick, N.J., learn about the lives of six fictional Israeli families who live on Ha’Olam Street (Hebrew for “the world”). Each of the families represents a distinct Israeli immigrant story — one family descends from both Moroccan Jews and Holocaust survivors, for instance. But Arabs, who make up 20% of the population inside Israel proper, have no presence on Ha’Olam Street.

“It is realistic,” said David Gedzelman, an HCSC board member, when asked about the omission of non-Jews. “This reflects the way neighborhoods are in Israel.” Gedzelman said that HCSC is in the process of developing a similar curriculum about Arab families, which will be taught in its schools next year. For now, teachers address the topic of Arabs in Israel through a cultural lens, describing the food and dress in Arab villages.

According to Gedzelman, the HCSC charter schools use Israeli maps in line with State Department standards, which delineate the West Bank and the Gaza Strip. But school principals say that the Israeli-Palestinian conflict does not enter class discussions. “It is not part of the curriculum,” said HLA’s Silver. “We are not learning in third grade about a political map, we are learning about a geographical map,” said Hatikvah Principal Naomi Drewitz.

Another new HCSC school, the Kavod Elementary Charter School in San Diego, Calif., was a product of its originator’s passion for Israel and the Hebrew language. Scheduled to open in September, the school was the brainchild of Jennie Starr, the founder of the Tarbuton Israeli Cultural Center in San Diego and a member of the local council of the American Israel Public Affairs Committee, the pro-Israel Washington lobby.

“A passionate, Israel-oriented, Hebrew-speaking community will almost certainly support Israel and stay connected to Judaism,” wrote Starr in the Autumn 2011 issue of Contact, describing Kavod and several other Hebrew-related initiatives that she is involved with. Though charter school rules bar selecting students by religion, Kavod Board President Tamar Caspi Shnall said that the school will naturally be a draw for San Diego’s large unaffiliated Jewish community. “Not only are we teaching Hebrew, we are teaching about the culture and history of Israel and its immigrant communities,” she said.

At the new Washington, D.C., charter, however, the school’s founders said that Israel will not be a special point of interest for the school. “Is it a Zionist enterprise? The answer is no,” said Jessica Lieberman, who helped establish the school. Israel will be taught “just as you learn about any other country in elementary school.”

In the school’s application to the board of charter schools, Sela’s founders instead described the advantages of bilingual education and of studying Hebrew as a gateway to doing business with Israel, a thriving global economy.

Sela’s ability to pull in Jewish students from the Washington area will be limited by the fact that most of the area’s Jewish population lives in the nearby Maryland suburbs. They will not have access to the D.C. charter school. Locating the school in D.C. itself makes it an option for a smaller Jewish demographic of mainly younger families living within the District’s city limits.

“[Sela] was created in response to two problems,” said James Hyman, CEO of the Partnership for Jewish Life and Learning in the Greater Washington area, “the cost of tuition at Jewish day schools and the lack of uniform results in the supplementary Jewish education.”

Hyman believes the new school will attract mainly families committed to public education and will not threaten the area’s existing day schools.

“It is a different kind of education,” agreed Jonathan Cannon, head of the Charles E. Smith Jewish Day School in Rockville, Md., the area’s largest Jewish day school. Cannon pointed to the full array of Jewish religious and cultural education, including Hebrew studies, provided by his school. “My gut tells me that the more options exist, the more interest there will be in Jewish education.”

While the upcoming Washington school does not present itself as a Jewish or pro-Israel school, and will have no Jewish religious content in its curriculum, many of the families showing interest in joining Sela are, in fact, Jewish. “This is a public school, and I don’t expect our kids to get any Jewish education there,” said Dan Shulman, a D.C. resident who views the school as a possible future option for his 2-year-old son. “We have a strong attraction and affinity to Israel,” he added, explaining why the Hebrew charter school suits his family’s needs.

Adrian Burney of Northeast D.C., another parent taking an interest in Sela, is not Jewish. Still, she finds the option of having her children study Hebrew more appealing than the specialized curricula at other charter schools. “They will always have opportunities to study Spanish and French,” she said. “I would like to expose them to a different experience.”

The HCSC, which is supported by philanthropist Michael Steinhardt and the late William Davidson, former owner of the Detroit Pistons, through the Areivim Philanthropic Group, is a fast-growing network, with schools either operating or planned for Washington, D.C., San Diego, New Jersey, and Brooklyn. Berman, HCSC’s chairperson, is Steinhardt’s daughter.

The network hopes to open an additional 20 Hebrew charters in five years. According to HCSC officials, the network’s fifth school may open in Harlem, New York’s historic center of African-American life and culture, pending approval at the state level. A group in Minneapolis, Minn., has expressed interest in opening an affiliated charter. “There are a number of states with very positive charter laws,” said HCSC’s Listhaus. “We are looking in those places.”

But as the number of HCSC schools has grown, the network has seen a few bumps in the road. Shortly after the opening of Hatikvah in September 2010, the East Brunswick Board of Education attempted to revoke its charter, saying that the state Commissioner of Education approved the school wrongly because it was under-enrolled. The case went all the way to the New Jersey Supreme Court, which recently upheld the Hatikvah charter.

The HCSC also provided grant funding to two schools with which it later cut ties. In 2009, the network gave a small grant to the Tikun Olam school in New Jersey, which received a $600,000 federal start-up grant even while its charter was refused by the state four different times for fabricating support from public officials, among other problems. According to a letter Listhaus sent to HCSC supporters, the network cut ties with the school when it decided to focus on K-8 education; Tikun Olam is a high school program.

The HCSC also initially supported the Albert Einstein Academy for Letters, Arts and Sciences in Santa Clara, Calif., but rescinded the grant once the school decided to make Hebrew one of several optional languages, instead of the focal point of the school.

Such hiccups notwithstanding, Listhaus said that the charters are going strong. “What charter schools do is offer us the opportunity to create a school [with] a commitment to teaching Hebrew that can’t be wiped away because a new superintendent comes into town,” he said.