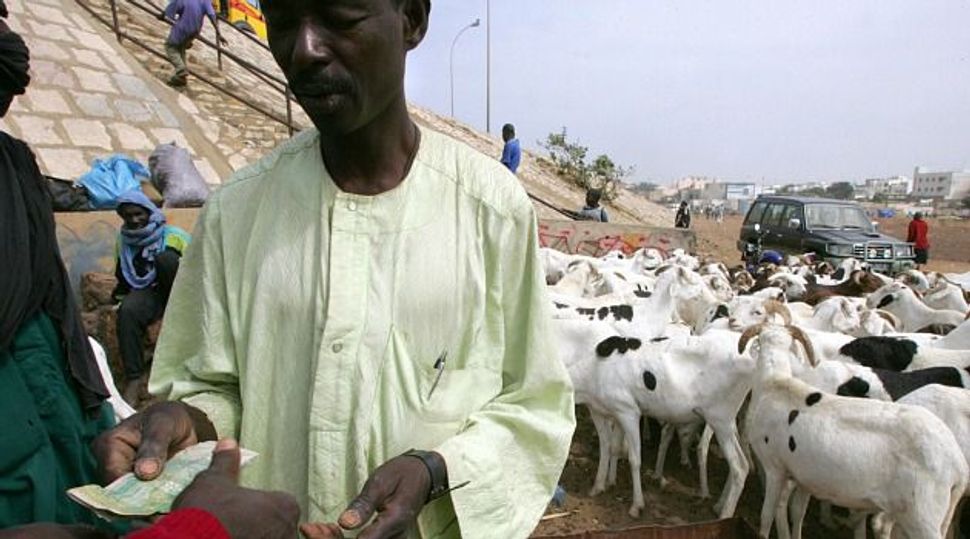 Goat Opening: A Senegalese trader sells a goat for the Muslim holiday of Tabaski. Israel?s aid program to its unlikely ally in West Africa includes an annual giveaway of beasts to impoverished communities. Image by getty images

Struggling to be heard over a flock of bleating sheep, Israel’s ambassador to Senegal invited a crowd of impoverished Muslims to help themselves to some 100 sacrificial animals that the embassy had corralled at a dusty community center.

That event, which was broadcast last October on national television and takes place every year to mark Tabaski, the local name of the Muslim Eid al-Adha feast, provides Israel with a powerful platform to burnish its image in a country that is 95 percent Muslim.

“It registers very strongly with locals that Israelis give them sheep for a Muslim holiday while most Arab embassies do nothing,” said Eli Ben-Tura, the Israeli ambassador.

The animals are just part of the millions that Israel has spent over the years in Senegal, a French-speaking Western African nation of 12 million where the average monthly salary is $158. In return, Senegal has supported Israel’s erection of a barrier to protect itself from Palestinian terrorism and, last December, signed over oil prospecting rights in its territorial waters to an Israeli-owned mining company.

Over the past decade, Israel’s trade has more than tripled with Senegal, a country about the size of South Dakota. Among its neighbors is Mali, where French troops have been fighting Islamic militants for months.

“Like Israel, Senegal is an island of stability in an unstable region,” Ben-Tura told JTA in an interview last week at the Israeli Embassy overlooking Independence Plaza in Dakar, Senegal’s capital city.

The importance Israel places on its partnership with Senegal was evident in Ben-Tura’s speech on April 30 at Israel’s 65th Independence Day celebration at the Grand Theatre National, a magnificent structure built with Chinese funding in 2011 near Dakar’s main port.

Speaking to an audience of 1,000, Ben-Tura listed Israel’s latest gifts to the country: training for hundreds of farmers; preparations to train thousands more by Israeli experts stationed in the country; and the establishment of a permanent depot for agricultural equipment and disease control.

Even intercultural activities have not been overlooked. After speeches by Ben-Tura and Mamadou Talla, Senegal’s minister of professional training, Israel Ballet artistic director Ido Tadmor and 40 local artists performed a modern dance routine featuring tea cups. Dozens of onlookers avidly recorded their every move on smartphones.

“Cultural exchange with Africa has been neglected for too long,” Ben-Tura said.

Yet beneath this seemingly symbiotic partnership may be a deeper concern. Mali, which used to be part of a federal entity with Senegal, last year witnessed an Islamic insurgency so powerful that French troops were called in to quell it. Some 475,000 people became refugees, many of them in Senegal. Some observers believe Senegal is wooing Israel and the West mainly for protection from the Islamic upheaval.

“The effects of the insurgency are not felt here for the time being,” said Oleg Sergeev, minister-counselor of the Russian Embassy in Dakar. “But the Senegalese authorities are turning westward out of concern over the possibility that the Mali insurgency may be trickling over.”

As an impoverished Muslim nation heavily dependent on foreign aid, Senegal must toe a careful line in its embrace of the Jewish state. Anti-Semitic books with titles such as “Hitler the Zionist Puppet” are sold here at bookstands. In 2009, several hundred people burned an Israeli flag at a rally to protest Israel’s Operation Cast Lead in Gaza.

The Senegalese government, then chair of the Organization of the Islamic Conference, condemned the attack as “unjustified and unacceptable.” Still, the government’s condemnations never went beyond words. “It was a very strong reaction, but it didn’t have an impact on diplomatic relations,” said Christian Clages, the German ambassador to Senegal.

Senegalese officials declined to address the reasons for their country’s closeness with Israel. But observers attribute it variously to the country’s moderate brand of Islam, its relative openness to the West and its past disillusionment with Arab regimes. In 1973, under pressure from Arab countries, Senegal severed its ties with Israel.

“The Arabs threatened sanctions and promised free oil but never delivered, to the bitter disappointment of the Senegalese,” said Zvi Mazel, a former Israeli Foreign Ministry official who negotiated the restoration of diplomatic relations in 1994.

Senegalese moderation was on display in 2012 when Jamra, one of the country’s leading Islamic associations, protested the release of an anti-Muslim film, “The Innocence of Muslims.” The online video triggered violent protests around the world, but in Senegal it led to the first meeting between Jamra and the Israeli Embassy.

Jamra’s executive president, Imam Massamba Diop, told JTA he learned in his November meeting with Ben-Tura that Israel had nothing to do with the film. And despite his organization’s generally pro-Palestinian posture — it considers Israel’s blockade on Gaza illegal and organizes pro-Palestinian activities in Dakar — Diop supports his government’s friendly relations with Israel.

Another Senegalese Muslim leader, Sheikh Paye, arrived at the Israel Independence Day celebration in a shiny, traditional white-and-gold imam robe. A spiritual leader in one of Dakar’s 19 neighborhoods, Paye told JTA that his attachment to Israel stems neither from gratitude for its largesse nor considerations of realpolitik.

“My late father used to be a good friend of several Israeli ambassadors here,” Paye said. “He died three months ago, shortly before the Israeli Embassy’s invitation arrived. It’s an honor to represent him here to people from a country he loved but never visited.”