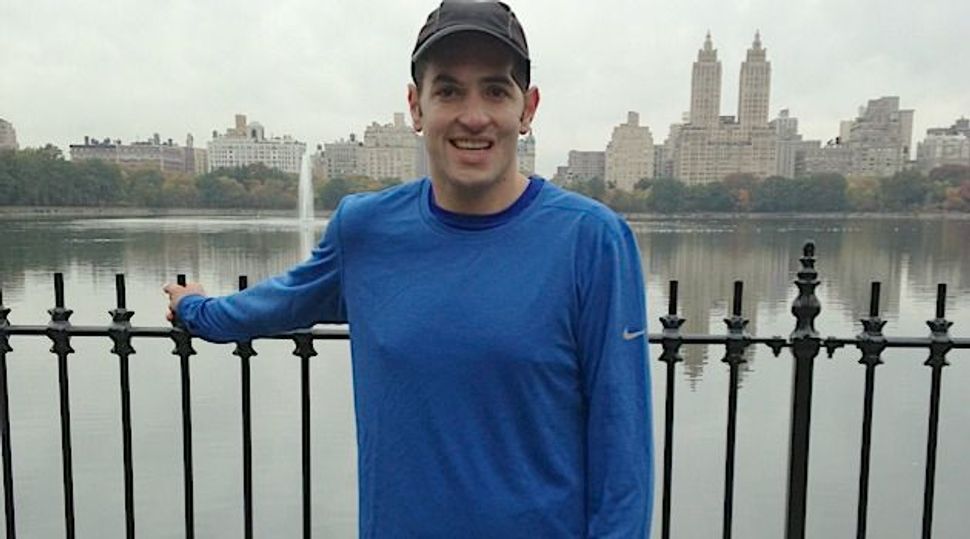 Renewed Life: After a near fatal injury during Operation Cast Lead, Aharon Karov was encouraged to take up running. This weekend, he will run the New York City Marathon. Image by Peter Hellman

On Jan 12, 2009, during the Israeli army’s operation in Gaza, an apparently mortally wounded paratrooper was helicoptered to a hospital in Israel. The left side of his face, including his nose, had been ripped away, and his body had been pierced by more than 500 shrapnel fragments.

It seemed unlikely that 2nd Lieutenant Aharon Karov, 21, a soldier in the elite Paratrooper Brigade 890, was going to survive. And if he did, it might have been as a vegetable. Nobody imagined that, just four years later, he would be running in the 2013 ING New York City Marathon.

But run he will, along with 81 other Israeli marathoners in a race that will draw close to 47,000 runners this Sunday.

Asked what his goal is for the event, he said: “I just want to finish the marathon, that’s all.”

In 2010, another former Israeli soldier, Gabi Yarkoni, who was blinded in a 1995 mission in Lebanon ran the marathon tethered to a “seeing” runner.

Karov’s effort on Sunday, as was Yarkoni’s, will be a run of resilience. Less than two weeks before being wounded, Karov had danced the night away at his own wedding. He was entitled to time off, but he and his bride, Tzvia, were in agreement that duty to the nation came first.

Twelve hours after saying their vows, and not without tears, Karov headed back to his unit. In Gaza, his soldiers were ordered to search a house that had been booby-trapped. Karov, who entered first, took the brunt of the huge explosion. The first soldier to reach Karov, as he lay motionless under the rubble, reported that he was dead.

Aboard the rescue helicopter, the wisp of life remaining in Karov was fading fast. A medic slit his lower throat to insert a breathing tube, a procedure never previously done in the air. Reviewing the X-ray showing shrapnel in Korvel’s head, “dangerously close to the dominant left side of his brain, not far from the speech region,” neurosurgeon Steve Jackson was not optimistic.

Jackson was amazed to learn that his patient had gone from his wedding into battle.

“You grow upon stories of heroes, and here I was was going to be operating on one,” says Jackson. Outside the waiting room, he told the weeping Tzvia, “For somebody so dedicated to his country as your husband, I have to give 150%.”

Jackson also promised that, if they had a son, he would, as a licensed mohel, perform the ritual circumcision.

Multiple surgeries later, including three nose reconstructions, Karov was able to resume normal life. He and Tzvia had a daughter in 2010, and last year, a son. Good to his word, Jackson was the mohel. Last winter, Jackson’s wife, Yitzhaka, attended a lecture given jointly by her husband and Karov, who was now on the Israeli lecture circuit, telling his story mainly to soldiers.

What Yitzhaka Jackson saw dismayed her. The formerly fit paratrooper had grown heavy. He seemed listless. Yitzhaka Jackson, herself a runner (as well as a nurse and lawyer), called Karov late that same evening.

“I gave him a short speech about running,” she said. “I told him it’s like therapy except that it’s cheap and efficient and at the end of each session he’ll be the winner.”

Karov promised to give running a try, but kept putting it off. Finally, he did begin working with a running coach, but they didn’t click. Karov asked Yitzhaka Jackson if she would personally train him.

She agreed with one provision: “We’d run together really early in the morning so that I could be back home before my own kids woke up.” On running mornings, Yitzhaka rose as early as 3:30 a.m. to run with Karov.

Since he started running, Karov has lost more than 50 pounds. Seeing his progress, Jackson asked him if he wanted to train for the New York City Marathon. He said yes.

Extensive medical testing determined that, even though his body was not the same as it had been before being wounded, he was fit to run 26.2 miles. For Jackson, the extra effort she would make to train Karov had one additional benefit. It would be a way to raise money for OneFamily Fund, an Israeli volunteer organization that supports victims of terror attacks.

Karov arrived for his first visit to New York just this week. The next morning, he did a short run in Central Park.

Jackson, who will run beside Aharon, has already told him bluntly not to push himself too hard on Sunday.

“He already had the experience of almost dying,” she said. “He doesn’t need to do it again.”