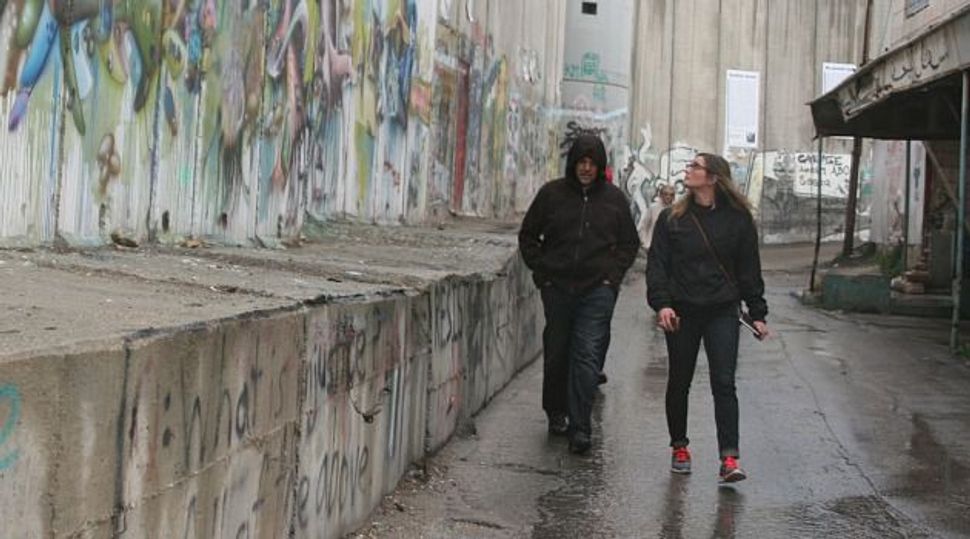 Wall of Injustice?: Tory Devries, right, of Santa Barbara, Calif., walks next to the Israeli-built separation barrier in Bethlehem.

On a bleak and rainy morning, the Israeli military checkpoint in Bethlehem looked especially depressing: rain-soaked concrete walls, a loose tin roof clattering in the wind, and Palestinian workers running across wet gravel into a cage-like narrow corridor to cross into Israel.

Their visit to the checkpoint was part of the third Christ at the Checkpoint conference, organized by the local Bethlehem Biblical College. It was a scene designed to move the Christian visitors — from the United States and around the world — to consider what the conference sponsors say are Israel’s violations of human rights in what Christians term the Holy Land. This year, 600 people attended, including dozens of American students of theological seminaries. What they saw is changing their minds.

British volunteer Michaela Whitton guided the morning walk to the checkpoint. As an “Ecumenical Accompanier” based in Bethlehem, Whitton escorts Palestinians who report harassment from Israeli soldiers and Israeli Jewish West Bank settlers. She details what she says are Israeli abuses to the UN.

“The checkpoint isn’t on a border,” Whitton told the group. “It’s two kilometers inside the border, and it is illegal under international law.”

Leah Ennis, a 26-year-old from the Reformed Church in Churchville, Pa., was stunned.

“It’s incredible that some people have to go through the checkpoint all the time,” she said. “It seemed a bit intimidating with the huge walls, and going through these long corridors.”

The wall in Bethlehem is part of a separation barrier that Israel has built since 2002 in response to a wave of Palestinian attacks. Palestinians point to its many departures from Israel’s pre-1967 border to loop deep into the West Bank, which they say amounts to a brazen land grab.

On the day the Forward visited the conference, there was no discussion of Islamic threats to Israel, although other reports quoted Ron Cantor of Messiah’s Mandate who said “no terror, no wall.”

Christ at the Checkpoint is both the evidence of a growing skepticism among young Christians toward this Israeli policy, and a vector for its growth.

The meeting in Bethlehem has raised hackles within Israel’s government. Earlier, Yigal Palmor, the chief press officer for the Ministry of Foreign Affairs, was quoted denouncing the conference as “an unacceptable and shameful act.”

“Using religion for the purpose of incitement in the service of political interests stains the person who does it with a stain of indelible infamy,” Palmor was quoted in the English language publication Israel Today.

America’s evangelical leadership has a long history of staunch support for Israel. And some of its major leaders directly oppose the two-state solution to the Israeli-Palestinian conflict, held as gospel by Washington, Jerusalem and mainstream American Jewish leaders.

But Ennis – and many other Christ at the Checkpoint attendees – took pains to say she was simply trying to get a more evenhanded view and to open a discussion in her church.

“There’s a good portion of our clergy and elders who still don’t think we should partner with certain [Palestinian] groups here to aid in the conflict,” she said. “We need to help people specifically, and not just by supporting armies, as we have traditionally been supporting the U.S. and the Israeli army.”

Christ at the Checkpoint is a far cry from other Christian trips to the Holy Land. For example, the Christian Zionist International Christian Embassy Jerusalem is promoting a summer tour including camel rides, an authentic Shabbat meal, and bringing “joy to the children of Bethlehem.” By contrast, visitors to the Bethlehem conference spent nights at the homes of Palestinian hosts and ate lunch at the Deheisheh refugee camp. On Tuesday, they visited Hebron guided by former Israeli soldier Mikhael Manekin, who showed them the Jewish settlement where Palestinians cannot walk the main street; their shops have been soldered shut by the Israeli army.

Tory Devries attended the conference with her parents Tom and Laura. Tom is the Executive Secretary of the Reformed Church in America. Like most attendees, they included the conference in a longer trip around the Holy Land, including sites inside Israel.

“I’ve been putting imagery to the stories I’ve seen in the Bible and it’s such a happy experience,” Tory said. “And then coming to something like this is just a harsh juxtaposition of what I thought Israel would be like and what I would want the Holy Land to be like.”

After the visit to the checkpoint, the conference schedule moved to a morning worship session. Prayers were printed in the conference handbook against a background of the concrete separation barrier.

Steven Haas, vice president of World Vision, an international evangelical development organization, said it was his third time attending Christ at the Checkpoint. He said World Vision workers noticed the same young Palestinian students they helped with schoolbooks and healthcare were wetting their beds because of Israeli night raids on their homes. He said questioning Israeli policy could often bring about a crisis of faith among evangelicals.

“For many the love for Israel is akin to their own conversions,” he said. “If you don’t believe this, your own belief in Jesus has a cloud around it.”

Speakers at the conference mined the theological implications of questioning Israel. One of the top-billed speakers was Gary Burge, a Presbyterian minister and New Testament scholar at Wheaton College in Illinois, and author of “Whose Land? Whose Promise?: What Christians Are Not Being Told About Israel and the Palestinians.”

In his speech, titled “A Dialogue on Replacement Theology,” Burge discussed how Christians ought to view Israel and the Jewish people. One idea that has held sway among Christians in the past – and is currently strong at the Bethlehem Biblical College – is Replacement Theology. This means that the covenant forged between Abraham and God, which gave Jews God’s blessing, land and protection, passed onto Christians after Christ.

“[Replacement Theology] does violence to the validity of the Jewish world, which has contributed richly to who we are in the 21st century,” Burge said.

But giving equal prestige to both the Jewish Covenant with Abraham and the Christian covenant would “demote Jesus,” Burge said. The solution, he said, was “Fulfillment Theology”: the idea that “in Christ the covenant of Abraham becomes what it is intended: a vehicle of redemption not only for Israel but for the entire world. “

The extension of that conclusion is that Abraham’s promise of land and blessings no longer specifically apply to the Jews, especially to the secular Jews who created modern Israel. “Clearly you cannot be broken off from the root of Abraham and still claim covenant blessing,” he said.

Burge spoke on a panel with Daniel Juster, the director of Tikkun International, an umbrella organization for Messianic Jews, a term taken by Jews who accept Jesus as messiah while continuing to uphold their Jewish identity. Juster spoke about the pain of Palestinians suffering under Israeli rule, and the pain of Jews who experienced pogroms and the Holocaust.

“How this can be solved with two people experiencing such levels of pain together in this land?” he asked. “Only Jesus and the power of His cross can overcome this. There is no other way.”

The audience clapped with approval.

Just prior to his appearance at the conference, Juster, who has previously denounced Islam as an inherently violent religion, sent an email to other Messianic Jewish organizations that gave an important nuance to his appearance at the conference. Messianic Jews, he said, need both “to acknowledge the injustices suffered by the innocent under Israeli rule and the injustices suffered under the rule of the P. A. and Hamas, the corruption, the stealing of foreign aid, and so much more.”

“If we do not acknowledge the Israeli injustices, however,” Juster said, “we will not get a hearing for the bigger issues of Israel’s election and the orientation of the Muslims to destroy Israel.”

Palestinians at the conference were buoyed by their guests. “I feel our message is reaching the world,” said Rev. Ashraf Tannous, of nearby Beit Sahour.

He said Evangelical support for Palestinians was new but noticeable – whether as teachers in local Christian schools or volunteers in the annual Palestinian olive harvest.

The conference included Canadians, French, British and other attendees – but the Americans were the most prominent and the most vocal. Burge summed up why:

“American Evangelicals live with an American exceptionalism,” he said. “America has a destiny, a theology of entitlement. Commitment to Israel is part of the American theology. And we will be blessed as a nation and church if we align ourselves to Israel.”

“The whole construct is problematic,” he said.