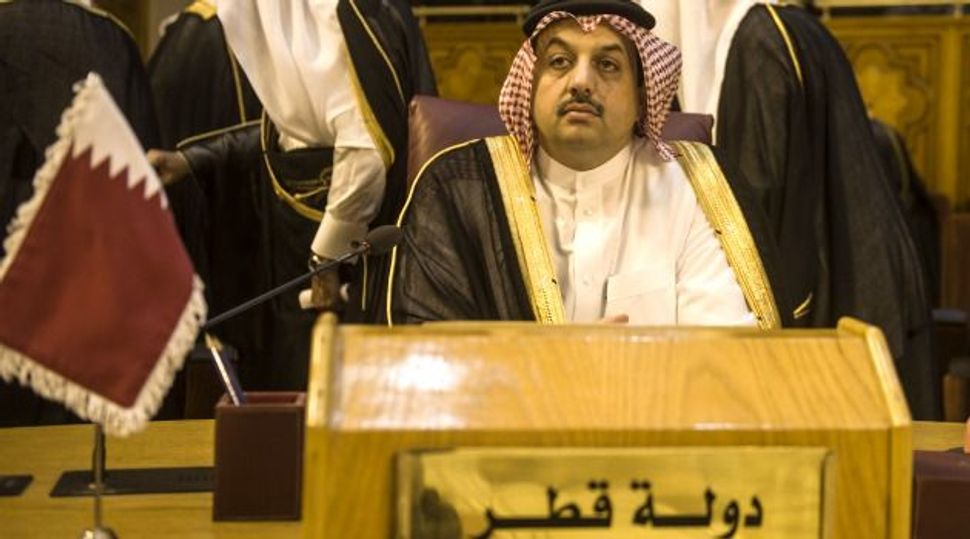 Labeled recently by Israel’s ambassador to the United Nations as a “Club Med for terrorists,” the tiny Gulf emirate of Qatar is being widely depicted, to the surprise of many, as a new regional villain in the Middle East, thanks to concerted attacks from Jerusalem and a coalition of Arab states whose interests coincide.

Yet Qatar, which has the highest per capita income in the world, was not so long ago a lone friendly face for Israelis in the otherwise hostile Gulf region. Even now, despite the tension between the two countries, Israelis continue to obtain visas for Qatar and travel freely to the emirate. And Qatar is still the only Gulf country that allows direct phone dial to Israel. Several Israeli companies still conduct business with Qatar. One of them sells rechargeable batteries. But all do it through third party firms that rebrand the products and erase signs of their Israeli origin.

The emirate’s new image as a regional bête noire is in large part due to its massive financial support of Hamas in the Gaza Strip, and of other, more radical Islamist groups whose brutality and extremism have alarmed Qatar’s neighbors. The sums sent from Qatar to Hamas, according to some estimates, amount to more than $500 million since 2012.

But in Washington, the efforts by Israel and its conditional Arab allies on this issue are facing a hard sell. The ties between Qatar and the United States run quite deep. Among other things, Qatar is home to a large U.S. Air Force base that serves as America’s front operation base for any possible strikes in the Gulf and the Middle East. Qatar is also a destination for nearly $5 billion a year in American exports. Six U.S. universities have branches in Qatar, as does the Brookings Institution with its Doha research center.

“Is the U.S. listening to Israel on Qatar? Almost certainly not,” said Simon Henderson, Director, Gulf and Energy Policy Program at the Washington Institute for Near East Policy. “The U.S. considers Qatar a country that has a role to play in the region, even though Israel thinks any Qatari role will legitimize Hamas.”

The emirate’s ability to count both Washington and branches of Al Qaeda among its friends is a reflection of a foreign policy that sees cultivating ties widely and disparately as the best strategy for a tiny country to exercise influence and enhance its security in an unstable region. But now, developments are increasingly pumping up the pressure on Qatar’s ruler, Emir Tamim bin Hamad Al Thani, to choose sides.

For Israel, the recent Gaza war inflamed strains already existing in recent years between the two countries. The emirate had positioned itself since 2009 as the key supporter of Palestinians in the Gaza Strip, through the Hamas government that rules the area. As the war continued and Israel encountered a massive infrastructure of tunnels built by Hamas and the organization’s impressive rocket cache, officials in Jerusalem pointed to Qatar as the culprit. Without Doha’s generous financial backing, they argued, Hamas’s military buildup could not have taken place.

Israelis struck at what they identified as Qatar’s weakness – its wish to become a global player despite its size. “The only way forward is to isolate Hamas’s last major backer,” Israel’s ambassador to the United Nations Ron Prosor wrote in a widely noted New York Times opinion piece on August 25. “Given Qatar’s considerable affluence and influence, this is an uncomfortable prospect for many Western nations, yet they must recognize that Qatar is not a part of the solution but a significant part of the problem.”

A paper written by Kobi Michael and Yoel Guzansky for Israel’s Institute for National Security studies called for international “overt and covert” actions to pressure Qatar, including “an international campaign…to prohibit Qatar from hosting the 2022 World Cup.”

Israeli official outrage over Qatar’s conduct during the war only intensified when Secretary of State John Kerry actively engaged with Qatar and Turkey, alongside Egypt, in his effort to negotiate a truce between Israel and Hamas. Egypt was acting as the prime regional intermediary in the effort to arrange a cease-fire. And Israeli officials found the government in Cairo, which harbored its own hostility toward Hamas, a congenial intermediary. They saw Kerry’s move as an alarming sign that the Obama administration was willing to bring in a government much friendlier to Hamas as a key player. One Israeli official was quoted in Haaretz as calling Kerry’s initiative a “strategic terrorist attack.”

“Bibi was looking for a scapegoat following his drop in popularity,” argued Patrick Theros, a former U.S. ambassador to Qatar, referring to Israeli Prime Minister Benjamin Netanyahu by his nickname. Theros stressed that he was expressing his personal opinion.

Others see Israel’s pointing to Qatar as strategically motivated, trying to make sure players that approve of Hamas remain outside the circle of influence.

“Israel wants to delegitimize Hamas or to counter its legitimacy, and if that includes bad mouthing Qatar then so be it,” said Henderson.

Things were quite different two decades ago. In 1995, Emir Tamim’s father, Hamad bin Khalifa Al Thani, assumed the throne amid high hopes for an Israeli-Palestinian peace process. In that atmosphere, Qatar took the step of forging low-level official ties with Israel. Under the title of a trade delegation, Israel sent its first diplomat to Doha and Qatar lifted its boycott of Israeli products. A Qatari-Israeli gas deal, brokered by Enron was in the works, and Israeli businesses began to look into the potential of doing business for the first time with a Gulf county. In 1997 Qatar hosted a regional economic forum that included Israel, despite a refusal by most Arab states to participate. For many Israelis, Qatar became a portal to the Gulf, at least in a symbolic way.

Qatar only severed its ties with Israel after the Jewish state launched its 2009 Cast Lead military operation in Gaza. Following that conflict, Qatar sent a diplomatic mission to Gaza and began providing massive economic assistance to the Strip. But even then, through discrete ties and backchannel talks, Qatar, Israel and the United States managed to work out arrangements that were meant to ensure transparency in Qatar’s aid to Gaza so as to ease Israeli concerns that the money was going to Hamas.

The recent Gaza operation convinced Israel that these arrangements had not been working, since Qatari funds were nevertheless funneled by Hamas for digging tunnels to attack Israel. Jerusalem sent out messages to Washington and other allies in the West that Qatar should no longer be seen as a legitimate partner. Washington has largely ignored these calls. Secretary Kerry, for example, continued to make use of Qatar’s ties with Hamas while attempting to broker a ceasefire. The United States also sought and received Qatar’s assistance in its negotiations to obtain the release last May of Army Sgt. Bowe Bergdahl from five years of captivity by the Taliban in Afghanistan. Qatar played a role more recently in the deal that led an extremist Syrian opposition group to set free American journalist Peter Theo Curtis.

Mutual interests such as these helped overcome tension between the Washington and Doha following the emirate’s decision to arm and fund anti-American Islamist groups fighting Syria’s president Bashar al-Assad. The United States supports ousting the Syrian ruler but backs more moderate opposition organizations in the country. Despite its influence in Washington, Israel’s criticism of Qatar did not pick up much traction. Crucially, the American Israel Public Affairs Committee, the large Washington-based pro-Israel lobby, did not take on the issue as a major talking point with Congress.

Qatar’s bigger problem in the United States right now has to do with the disturbing reports about its labor practices in constructing the soccer stadiums planned to host the 2022 World Cup games. International observers warned that thousands of migrant workers could die due to inhumane working conditions. Pennsylvania’s Democratic Senator Bob Casey has already called for the games to be moved to America because of Qatar’s labor practices.

Despite this bump in the road—and despite the opposition by Israel, Egypt and Saudi Arabia to giving it a place at the diplomatic table — Qatar still believes it has a valuable role to play in Middle East peacemaking. Among other things, it offers channels of communication few other players can. Its close ties with Sunni Islamist groups, including Hamas and the Muslim Brotherhood, and groups in Afghanistan and Syria, can provide America with the access its needs to parties with whom it cannot directly engage.

“Qataris think they are in a position to negotiate a lasting ceasefire. They don’t believe other parties share their commitment to a long-term resolution of the issue,” said Theros.

Even Israel, some claim, still seeks Qatar’s diplomatic services from time to time. Israeli and Qatari sources said the two nations still maintain open communication channels that are put to use when open diplomacy is no longer possible.