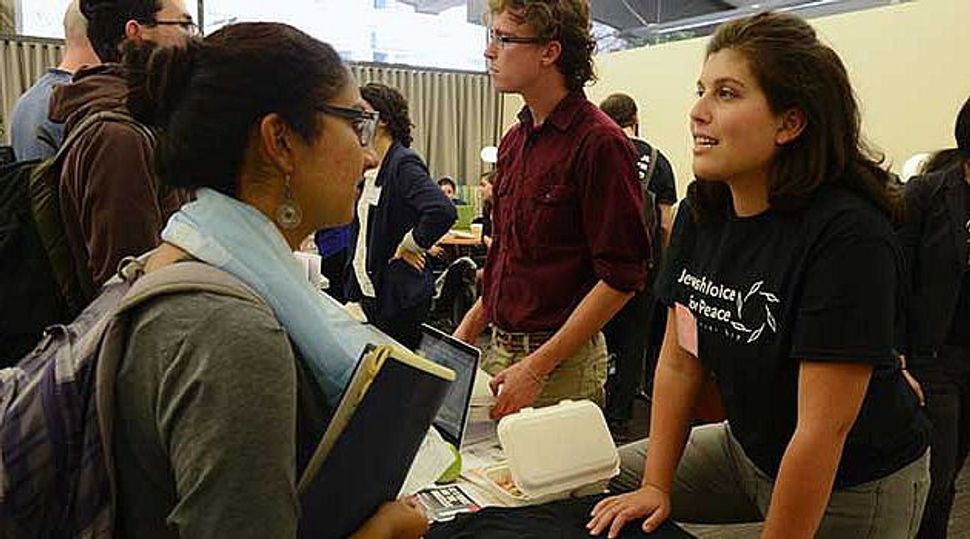 “Wow,” she said, speaking to an audience of some 350 composed primarily of American college students. “This is amazing. This is really cool.”

Sandalow-Ash, 21, went on to discuss the importance of nurturing a pluralistic and intellectually diverse Jewish community.

The crowd had gathered at Harvard for “If Not Now When,” the inaugural conference of Open Hillel — a 2-year-old student group that seeks to abolish Hillel International Standards of Partnership rules that prevent campus Hillels from collaborating with people or groups that “delegitimize” the Jewish state, or support efforts of the Boycott, Divestment and Sanctions (BDS) movement targeted at Israel.

Since Hillel adopted the guidelines, the “Standards for Partnership,” the Hillels at Swarthmore College, Vassar College and Wesleyan University have declared themselves “Open Hillels” and said they would not conform to them.

The two-day Open Hillel conference included lectures, panels and workshops on topics such as “Israel/Palestine Politics of College Campuses,” “Race in the American Jewish Community,” “Intermarriage: Good, Bad, or Neutral for the Jewish People?” and “Philanthropy and Power: How Big Donors Shape the Agenda in the Jewish World.”

Speakers at the event included Rashid Khalidi, a controversial Columbia professor of Arab studies who was recently barred from speaking at Ramaz High School; gender theorist Judith Butler, a professor at the University of California, Berkeley, who has made provocative statements about Israel and its enemies; Steven M. Cohen, a sociologist at the Hebrew Union College-Jewish Institute of Religion who identifies as a “progressive Zionist”; and journalist and City University of New York Professor Peter Beinart, the author of the 2012 book “Crisis of Zionism,” and a sharp critic of Israeli policies.

A host of students and community organizers also spoke and led workshops.

In recent years, Hillel International has made Israel advocacy more central to its mission, launching and growing its Israel Fellows program, bringing to U.S. college campuses individuals who have served in the Israeli military and, in 2010, installing the Standards of Partnership. The guidelines preclude campus Hillels from partnering with or hosting groups or speakers deemed hostile to Israel.

The organization, whose network serves some 550 college campuses around the world, “views Israel as a core element of Jewish life and a gateway to Jewish identification for students,” according to its website. And while it won’t partner with organizations that fall beyond the ideological boundaries set forth, such as pro-BDS groups like Students for Justice in Palestine and Jewish Voice for Peace, its leaders have said that all students are welcome at its campus centers and events.

Hillel International is not the only organization determined to persuade college students of the importance of being pro-Israel.

In 2002, Hillel coordinated with the Charles & Lynn Schusterman Family Foundation to establish the Israel on Campus Coalition, whose mission is “to evaluate the worrisome rise in anti-Israel activities on college campuses across North America” and serve as a coordinating body for a host of pro-Israel campus groups.

The following year saw the beginning of the David Project, which has a stated aim “to positively shape campus opinion on Israel by educating, training, and empowering student leaders to be thoughtful, strategic and persuasive advocates.”

The David Project was started by philanthropist Charles Jacobs, who heads up Americans for Peace and Tolerance, which is dedicated to exposing Islamic extremism.

This year, Israeli Prime Minister Benjamin Netanyahu himself pledged millions in Israeli taxpayer dollars to the Diaspora, a portion of which is being allocated to American college campuses and to Birthright Israel, though the specifics remain unclear as to how that money will be spent.

The fears that drive these efforts are not unfounded.

Research suggests that young Jews are moving away from the idea that being Jewish and supporting Israel are inextricably linked. The recent Pew study on the American Jewish community found that 92 percent of American Jews aged 18 to 29 believe that people can be Jewish “if they are strongly critical of Israel.”

Noam Neusner, a spokesman for Hillel International, said that “the vast majority of Jewish students are in support of the guidelines.” He also said that the organizers of Open Hillel are “still part of the Hillel family,” but said he found their complaints perplexing.

“What’s the issue here?” Neusner said. “What are they complaining about? Do they want Hillel to become a pro-BDS organization?”

He did not directly address the issue of whether Hillel International would withdraw funding from campus Hillels that violate the partnership agreement.

“We’ll deal with those situations if and when they occur,” he said.

In contrast to Hillel International, conference organizers said that Open Hillel is representative of a significant portion of the Jewish student population.

“There are definitely some students who would be uncomfortable if Hillel’s partnership standards were done away with, but there are also many students who are uncomfortable with the status quo,” said Sandra Korn, a recent Harvard alumna and conference organizer.

About 25 Harvard students from an estimated undergraduate Jewish student population of 1,675 attended the conference. Students from dozens of colleges and universities across the country made up the majority of the 368 registered attendees. Most were Jewish college students, though a group of Muslim students from Princeton University and Rabbi Joseph Kolakowski of Bethel, N.Y., who is anti-Zionist, also were among the attendees.

“I was struck by how much at the conference could easily have happened at Harvard Hillel with no resistance whatsoever,” Jonah Steinberg, Harvard Hillel’s rabbi and director, told JTA via email. “We only refuse to host programs, events, and speakers whose aim is to promote the severing of our essential connection with Israel, which is the destructive goal of the BDS movement.”

Steinberg attended portions of the conference, as did Getzel Davis, the associate rabbi at Harvard Hillel, which adheres to the partnership rules.

“Some really like them; some really don’t,” Davis said of the guidelines. “Where we are is where our consensus led us.” The conference was entirely student-run and, aside from two small grants from Harvard, was funded through grassroots efforts. Of the more than $36,000 collected, the median donation was $35, organizers said.

An array of organizations had tables at the event. They included educational institutions such as Hebrew College and the Reconstructionist Rabbinical College, and dovish advocacy groups such as J Street U and the New Israel Fund, as well as groups more sharply critical of Israel, such as Tufts Students for Justice in Palestine and the International Jewish Anti-Zionist Network.

Students and activists affiliated with Jewish Voice for Peace had a strong showing.

So, too, did students who are explicitly Zionist and personally oppose BDS efforts, but disagree with Hillel’s partnership rules.

Among them was Josh Wolfsun, a Swathmore junior, who helped draft and promote the declaration that his campus would house the first Open Hillel.

“I don’t violate any of the Standards of Partnership,” Wolfsun told JTA. “But a lot of it was friends of mine and people I knew. A lot of it was Jewish friends of mine who weren’t part of Swarthmore Hillel because they felt that the views that Hillel was drawing a line around and saying ‘these are OK’ didn’t include their views.”

“It’s a very weird thing as a student in a student group and in Hillel, which is supposed to be an organization for college students, to have your programming constrained by people not on your campus saying we don’t think Jewish students should hear what these people have to say,” she said. 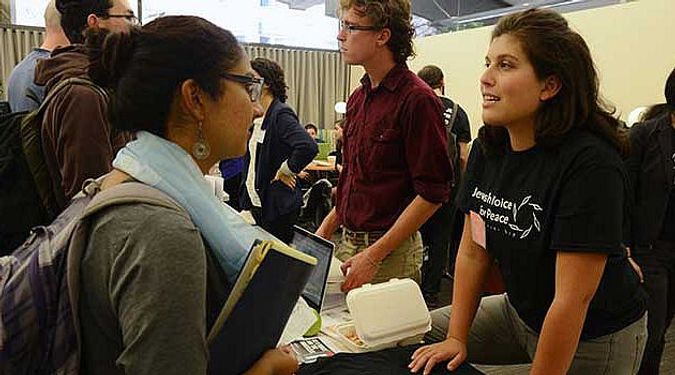