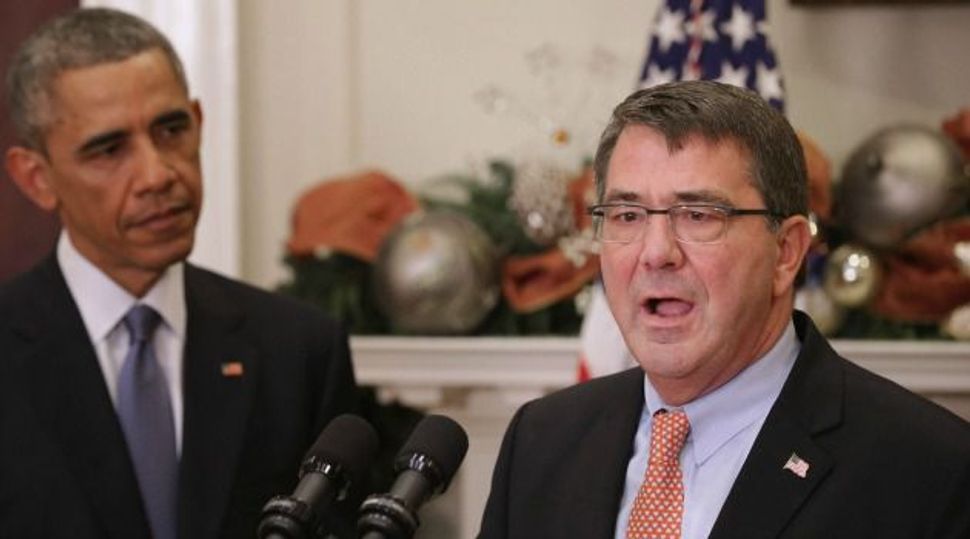 (JTA) — Ashton Carter has championed the sale to Israel of state-of-the-art combat aircraft, has aligned himself with Iran hawks and was observed becoming misty-eyed when serenaded by Israeli soldiers.

Carter, 60, President Obama’s secretary of defense nominee, has been depicted in the media as the un-Chuck Hagel.

He’s assertive and a bureaucratic in-fighter where Hagel, whose two-year stint as defense secretary ended this month with his forced resignation, was seen as passive and at times at sea. He’s hawkish, where Hagel, a Vietnam vet who as a GOP senator was virtually alone in his caucus in criticizing the Iraq War, was brought in by Obama to draw down U.S. military involvement overseas.

Yet on Israel policy, Carter would represent more continuity than change should he be confirmed. That’s in part because, despite diplomatic tensions between the Obama and Netanyahu governments, the security relationship remains as solid and ever — and also because Carter, until last year a deputy defense secretary, is a loyal soldier to his boss’ agenda.

“Ash Carter is a very respected guy in Washington; he should have no trouble being confirmed,” said Michael Makovsky, the CEO of the Jewish Institute for National Security Affairs, who served as a senior defense official in the George W. Bush administration.

“He knows the building,” Makovsky said of Carter, using a Pentagon euphemism for an inside player.

Statements from Republican senators suggest that Carter, who is known for his ability to cut costs and improve efficiency, may be a shoo-in.

Sen. Mark Kirk (R-Ill.) told JTA in an email: “I am hopeful that Ashton Carter’s expertise on defense and military weaponry amid budget constraints, along with his deep understanding of the culture at the Pentagon, will help the Administration to adopt a more coherent and effective long-term strategy for combating the many threats faced by the United States and its allies.”

Kirk said the administration “is not doing enough to roll back Iran’s growing nuclear and terror threats throughout the Middle East.”

Hagel, despite fierce opposition during his 2012-13 nomination process from pro-Israel hawks, leaves the defense post with warm kudos from his Israeli counterpart, Moshe Yaalon, and from the Anti-Defamation League — one of the groups that had reservations about Hagel’s Israel criticism during his Senate career.

His “contributions to Israel’s defense infrastructure and to Israeli relations with the United States were great and very substantive,” Yaalon said of Hagel in a Hebrew tweet. The ADL said Hagel’s “energetic stewardship” of the U.S.-Israel relationship had been “vital.”

Hagel was pushed out over his inability to pierce the inner circle in the White House national security team, and because his approach to drawing down troops was seen as no longer appropriate given increased U.S. involvement in conflict zones overseas.

Consistency on Pentagon cooperation with Israel is a given, whether or not the candidate, like Carter, has pro-Israel bona fides, said Anthony Cordesman, a strategy analyst at the Center for Strategic and International Studies who has advised U.S. governments on warfare.

“Virtually every administration has made close military ties with Israel a military priority,” Cordesman said in an interview. “It is simply a fact of American political life.”

Still, those who know Carter say his record of understanding Israeli needs during stints as undersecretary of defense for acquisitions from 2009 to 2011, and then as deputy secretary from 2011 to 2013, made him a choice pick from the pro-Israel point of view.

Carter, trained as a physicist, demonstrated a keen, detailed understanding of Israel’s technical needs, said Udi Shani, the director-general of Israel’s defense ministry from 2010 to 2013.

“I found him very positive, very understanding of the needs of our country, our requirements for security and developing the IDF and the Ministry of Defense,” Shani, now a consultant, said in an interview.

Shani said one attribute made Carter an especially valuable interlocutor: He was honest and would describe outright what reception the United States was likely to give an Israeli proposal.

Carter is well known for shepherding through Israel’s inclusion in the Joint Fight Striker program, a collaborative venture by the United States and a number of allies to manufacture a stealth fighter that is due for release this decade.

A colleague of Carter’s at the Pentagon, speaking on condition of anonymity because of the sensitivity of the project, said Carter played a critical role in cutting through red tape to make sure Israel’s demands for the aircraft were included.

“We would laugh about how we can’t make decisions quickly” because of the respective U.S. and Israeli bureaucracies, Shani said.

“It was simple soldiers singing Hebrew songs,” Shani recalled. “He enjoyed it very much.”

Carter was part of a team that drafted an influential 2008 report,“Meeting the Challenge,” on Iran’s nuclear capability.

Many of the recommendations in the report, which was prepared for the Bipartisan Policy Center, comport with current Obama administration policy, particularly in emphasizing the need for maintaining an international coalition in dealing with Iran.

Other recommendations, however, are closer to what is now the position of the Israeli government and Republicans in Congress: not allowing Iran any uranium enrichment capacity whatsoever. Obama administration officials have said that should nuclear talks now underway between Iran and the major powers arrive at a deal, Iran would likely remain with a minimal enrichment capability.

Makovsky led the writing of the Bipartisan Policy Center report and is critical of the talks. He said that Carter, while fairly described as “tough” on Iran, would most likely hew to the administration policy that has evolved since the launch of the talks.

Cordesman agreed, saying, “There’s a difference in talking in theory and dealing with actual negotiation.”