Will Chuck Schumer Side With Republicans Over President Obama on Iran Nuclear Deal? 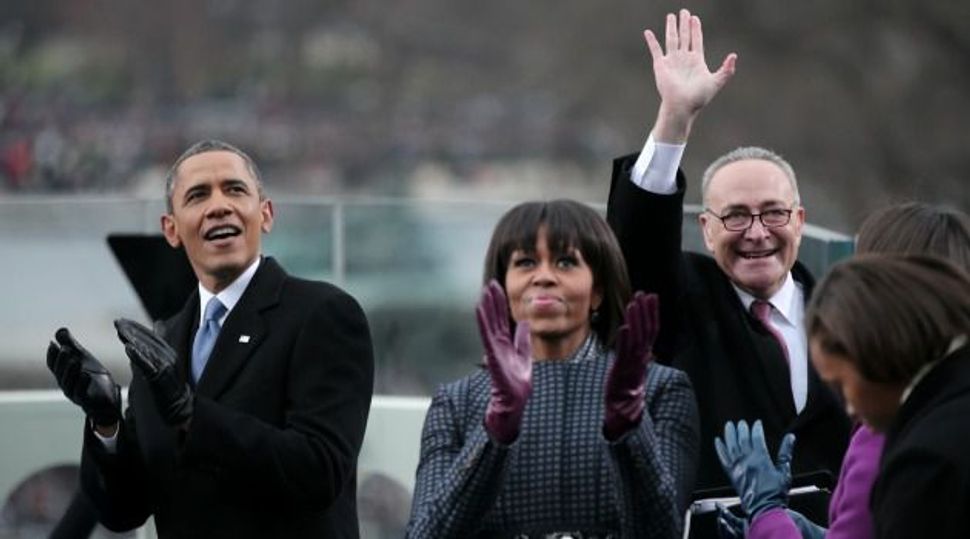 Still the One? Sen. Chuck Schumer is a strong supporter of Barack Obama, and was rewarded with a prime position at the president’s second inauguration. Image by getty images

The path to a bill that would effectively scuttle President Obama’s deal with Iran on its nuclear development program runs through two Jewish senators: Ben Cardin of Maryland and Chuck Schumer of New York.

A month ago, neither Cardin nor Schumer would have been the first name on the list of Democrats on whose support the fate of Tennessee Republican Bob Corker’s Iran Nuclear Agreement Review Act turns. Yet recent developments have thrust both these lawmakers into the hot seat on the Corker bill, which would set up a vote on ending sanctions against Iran after a was signed with its government.

On April 2, Cardin was suddenly anointed ranking Democrat on the Senate Foreign Relations Committee after a federal bribery indictment caused Sen. Bob Menendez of New Jersey to step down from the post. And Schumer was all but formally named to succeed Senate minority leader Harry Reid when Reid announced on March 27 that he will not run for re-election when his term ends in 2016.

The coming fight over the bill will test both men’s strong ties with Jewish communal backers on the one hand and with the White House on the other.

Obama has vowed to veto the Corker bill in its current form even as the American Israel Public Affairs Committee, the Jewish establishment’s mainstream pro-Israel lobby, has pulled out its full arsenal to back it. With Republicans in the majority almost uniformly backing the legislation, the question now is how many Democrats will be willing to break ranks with the president — and under what conditions.

As the Foreign Relations Committee’s new minority leader, Cardin is in a pivotal position to influence the shaping of the bill in committee, and to send a bright signal when the committee vote comes in mid-April. Schumer, meanwhile, is suddenly the most visible Democrat in the Senate, his every move a semaphore with implications for future leadership struggles, and the future direction of the Democratic caucus.

“I generally am supportive of what Senator Corker is trying to do,” Cardin told the Forward on April 6. But he added, “There are a couple of provisions that may need to be modified.”

Cardin referred specifically to a section of the bill that would require the president to certify every 90 days after Congressional approval of a deal that Iran has not supported terrorism against the United States or against an American “anywhere in the world.”

Critics say that incorporating terrorism concerns into the nuclear deal will effectively kill the agreement. Such a certification would be difficult or impossible for the president to make, they say. And the United States, they note, has a separate set of sanctions in place against Iran to penalize it for terrorism, sanctions that are not slated for removal under the nuclear agreement.

“This agreement is focused on nuclear goals, so we want to make sure they are separated,” Cardin told the Forward. He said that the terrorism provision was an issue he hoped to address in committee. Schumer, meanwhile, told Politico on the same day, “I strongly believe Congress should have the right to disapprove any agreement, and I support the Corker bill, which would allow that to occur.”

“I know people that are very happy that Senator Schumer has taken the position he has,” said Hank Sheinkopf, a right-leaning Democratic political strategist with close Jewish communal ties. “The people that are certainly talking to Senator Schumer believe the Senate can be more rational” about an Iran deal than the administration.

AIPAC, meanwhile, made the Corker legislation in its current form the centerpiece of a major lobbying push at the group’s annual Washington conference in March. In a bill summary published that month, AIPAC argued: “On such a critical issue to U.S. national security, Congress must assert its historic role in foreign policy, review any agreement, and object to an agreement if it will not prevent a nuclear-capable Iran.”

J Street, the dovish Israel lobby, is pushing for changes to the Corker bill, and is asking Senators to oppose it in its current form.

“There’s a real danger that this could pass,” said Dylan Williams, J Street’s vice president of government affairs. Referring to the provision requiring certifications that Iran does not support terrorism, he said, “We want to make sure that if it does pass there are no provisions in it that guarantee that it would kill any agreement reached.”

Both Cardin and Schumer share deep, long-standing ties to the Jewish community in general, and pro-Israel interests in particular. Cardin’s wife, Myrna Edelman Cardin, has served as president of the Baltimore Jewish Council; his first cousin by marriage, Shoshana Cardin, is a former chair of the Conference of Presidents of Major American Jewish Organizations.

“I think he’s going to try to thread the needle in many ways, with the desires of the president, the desires of his fellow members of congress and his constituents, both Jewish and non-Jewish,” said Arthur Abramson, executive director of the Baltimore Jewish Council.

Schumer, for his part, has long-standing ties with the vocal Jewish community in his home state. Ben Chouake, who runs the AIPAC-allied pro-Israel fundraising group NORPAC, said he had recently spoken with Schumer about the Corker bill.

“We didn’t actually ask him to do it, he said he liked the legislation,” Chouake said. “The point of the whole conversation was making sure you get the best possible situation to prevent Iran from obtaining nuclear weapons, and he thought this would be a good part of the process.”

According to Douglas Bloomfield, a former chief AIPAC lobbyist who is now critical of the group, AIPAC is likely asking its supporters to push their elected officials hard on the bill. “They have more than 20 years invested in this,” he said. “My guess is, they are contacting all their members and telling them to contact your members of congress, your members of the Senate, to vote yes on the Corker bill.”

Corker’s bill essentially creates a backstop by which Congress could scuttle an Iran deal after it is signed. The Constitution gives the Senate the power to ratify international treaties. But the Iran deal is an executive agreement, and not technically a treaty. That would ordinarily leave the Senate out of the picture. But the proposed bill requires that any agreement with Iran be put on hold for two months after signing as Congress reviews its details. Congress could then pass a resolution against the deal, which would bar the president from lifting sanctions that Congress had previously imposed on Iran.

“It’s understandable that members of Congress… want to assert their role in oversight of something as important as the Iran deal,” said Lara Friedman, director of policy and government relations at the dovish pro-Israel group Americans for Peace Now. “It may be possible to amend the Corker bill in such a way that the poison pills that are in now are eliminated.”

Will Chuck Schumer Side With Republicans Over President Obama on Iran Nuclear Deal?