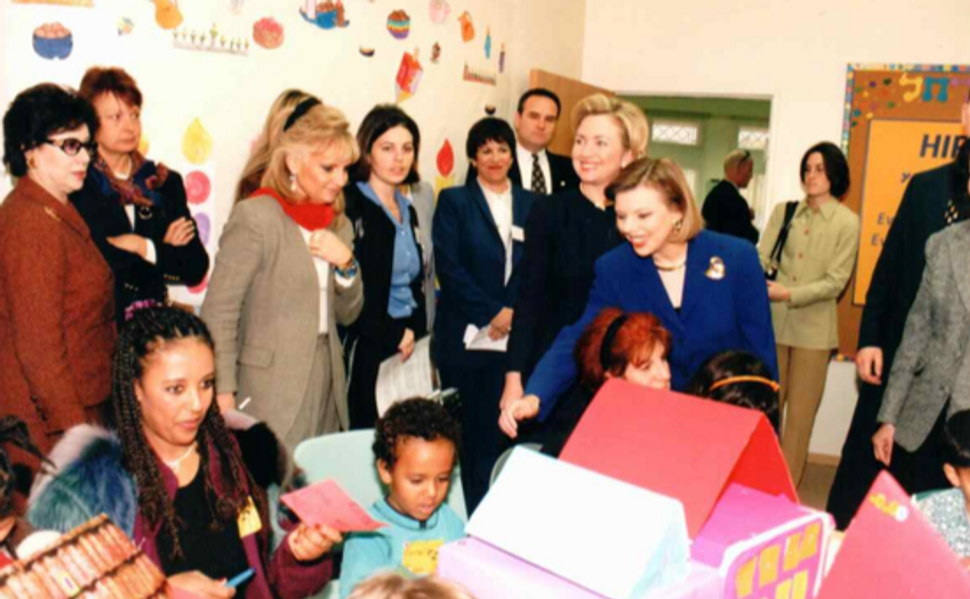 Each week in Israel, young parents open their homes to local instructors who teach them how to prepare their toddlers for school.

The program is modest — just 4,000 families enroll — but it’s now playing an outsized role in Hillary Clinton’s presidential bid. Even as New Hampshire voters went to the polls on their widely watched primary day, her campaign crafted a fundraising e-mail around the Israeli program and blasted it out.

In her bid for the Democratic nomination, Clinton rarely misses an opportunity to tout her record on early childhood education, from her first job out of law school at the Children’s Defense Fund to her Too Small To Fail program at The Clinton Foundation.

Never far down on her list is the Home Instruction for Parents of Preschool Youngsters, the program she imported to Arkansas from Israel. HIPPY trains parents — mostly women — in low-income communities to teach their young children basic skills, like counting or shape recognition, reflecting the ethos that parents are their children’s first teachers.

The story of how Clinton brought the Israeli education program to America starts with a coincidence.

In 1969, an Israeli educator named Avima Lombard conceived the program as a way to help the children of North African immigrants get a head start in the Israeli school system. Lombard developed the program at the National Council of Jewish Women research institute, housed at The Hebrew University of Jerusalem.

It began with a pilot group of 100 families in the HaTikva neighborhood of south Tel Aviv. Called ha-Etgar, or “the challenge” in Hebrew, it soon drew the attention of the Ministry of Education, which made it into a national program.

Less than two decades after ha-Etgar’s Israeli debut, Lombard received a grant from the Ford Foundation to expand the program to the United States. One of the first sites was in Miami.

In 1985, Clinton was on a trip to Miami with her husband, Bill Clinton, for a conference of the Southern Governors’ Association when she saw an article on the new HIPPY program in Florida in The Miami Herald. Clinton clipped the article and asked her assistant to look into the program.

“When she saw this program it just kind of yelled out to her,” said Nan Rich, a Florida politician and former president of NJCW who helped initiate HIPPY in Miami. “This was what she was looking for, and she thought it would work in Arkansas.”

At a 2003 HIPPY ceremony in New York, Clinton recalled her first phone call to Lombard: “My name is Hillary Clinton and my husband is the governor of Arkansas.” Lombard responded: “The what of what? Why are you calling me?” Clinton explained that she was interested in bringing HIPPY to Arkansas. “I have no idea where Arkansas is!” Lombard said, in Clinton’s recounting. “Is it near Texas?”

Clinton’s associates in Arkansas apparently had a similar reaction when she told them they would have to travel to the Holy Land for HIPPY training: “‘Israel! Where is Israel?’”

Clinton soon brought HIPPY to Arkansas, where Bill Clinton signed legislation to fund it as a statewide program. According to Miriam Westheimer, head of the program’s global arm, HIPPY International, Clinton was able to sell the program to reluctant conservatives in Arkansas by talking about it serving as a job creator. “We could make the ultimately very progressive program fit lots of different agendas,” Westheimer said.

After its success in Arkansas, the program expanded to several other states. Clinton became a member of the board, a role that she relinquished when Bill Clinton ran for president. Today, HIPPY is in 140 communities around the country, serving 15,000 families. Its funding and operational mechanisms differ from state to state.

The program trains home visitors, usually from the community, who meet with parents and instruct them on how to teach their children through role-play. The parents hold daily sessions with their children, using HIPPY workbooks to teach them shapes, letter recognition, singing, rhyming and more in order to prepare them for school.

“Parents want the best for their children,” Westheimer said. “That is the universal phenomenon, and if you can tap into that and provide them with guidance and support and materials, you have a very willing partner.”

HIPPY has been studied widely in academic and research settings. While a 1999 Princeton University study found that attrition from the program was an issue, other studies lauded HIPPY. A 2013–2014 Dallas Independent School District evaluation found that HIPPY students did better than their non-HIPPY peers in reading and math.

As the program took root in the United States, Clinton and Lombard grew close. “There was a warmth there,” Rich said. “I remember when [Lombard] died [in 2008], Hillary and I had a conversation. She saw her as a friend and a colleague, and someone she highly respected.”

According to Westheimer, few people stood up to Lombard and won, but Clinton prevailed. “Avima did not want that to happen,” Westheimer said. “It was just a tough moment in the relationship.”

There were other hiccups along the way, like the time that Holland spun off from the organization to form a separate, HIPPY-inspired program.

HIPPY in Holland had wanted to copyright its own materials, which Lombard did not allow. According to Westheimer, HIPPY in Holland’s decision to separate was also political, as board members and government officials there worried that using an Israeli program on the Muslim population would run afoul of local sensitivities. But parents in Holland felt differently, Westheimer said. “Several parents told me, ‘Why would it matter where it’s from if it can help my children?’” Attempts to bring the program to Jordan also failed for political reasons.

HIPPY found a home in eight other countries, and soon it will be expanded to Liberia, Westheimer said. Along the way, it became a major talking point for Clinton regarding her work in early childhood education. In her 1996 book, “It Takes a Village,” Clinton discussed how the HIPPY program helped parents become learners, too. “Many of them became interested in learning for themselves as well as for their children, going back to school to get a high school equivalency degree or even starting college,” she wrote.

Clinton also wrote about the program last year in an op-ed in the Forward, in which she explained her “unbreakable” support for Israel, saying she was “so impressed with the Israeli approach to early childhood education” that she worked to bring HIPPY to Arkansas. In addition to focusing his primary-day fundraising e-mail on the program, Bill Clinton also mentioned HIPPY in a video advertisement for his wife’s campaign for the presidency.

In 1998, Hillary Clinton visited a HIPPY event in Jerusalem while accompanying her husband when he was president. It was around holiday time, and Clinton was photographed with HIPPY children and their mothers.

“It was very moving,” said Rich, who was also there and is now a volunteer with the Clinton campaign. “And it is so interesting when people say somehow she doesn’t have passion. I have watched her have passion and warmth and how this really is emotional for her.”