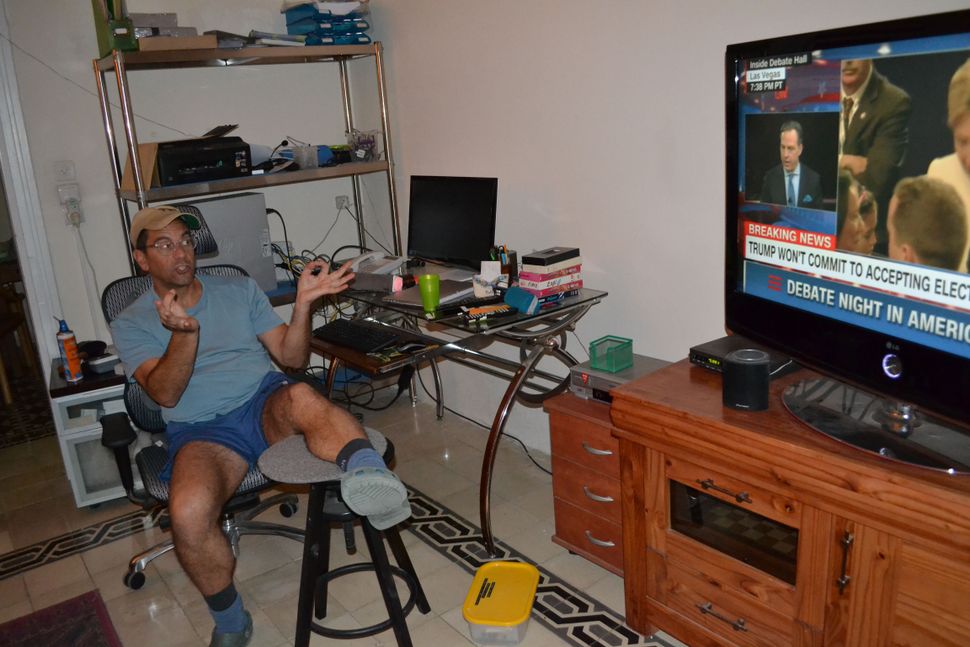 Clinton supporter Robby Berman gestures at the television during the presidential debate. Image by Naomi Zeveloff

In the United States, one would be hard pressed to find Trump and Clinton supporters at the same debate watch party, let alone in the same room. But in a Jerusalem apartment, two political rivals watched the candidates face off over bowls of Ben & Jerry’s ice cream.

Hardly any Israelis watch the presidential debates, which air at 4:00 AM Israel time. Robby Berman, the founder of the Halachic Organ Donor society and Abe Katsman, the attorney for Republicans Overseas Israel, both Americans who immigrated to Israel, are among the few exceptions.

Berman, the Clinton voter, said he had hoped to vote for a Republican this election to undo eight years of Obama’s foreign policy. But Trump scares him. “I’m not voting for [Clinton] because I like her. I’m voting for her because I think [Trump] is an unstable person and dangerous to America.” 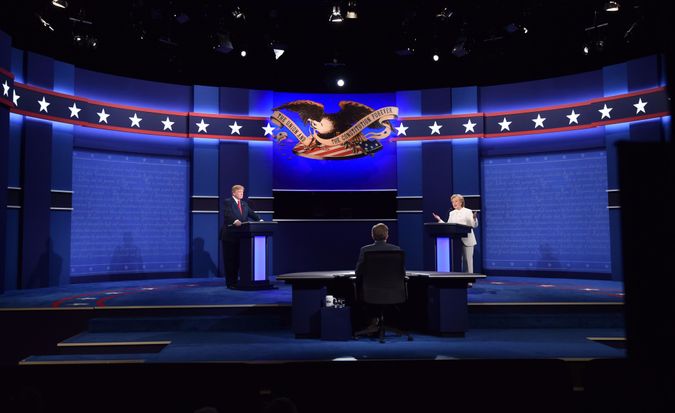 Katsman said Trump wasn’t his “first choice or even close to it,” but he is devoted to getting Trump elected for fear of a Clinton presidency, which he believes would be bad for Israel and bad for American-Israelis. Republicans Overseas Israel has run a tightly organized campaign in Israel — especially compared to Trump’s chaotic U.S. operation — with six outreach offices in Israel and the West Bank.

Berman hosted Katsman, a friendly acquaintance, in his west Jerusalem apartment where he displayed the debate on a large flatscreen. Berman sat in a desk chair, checking Facebook throughout the debate, while Katsman sat on a leather couch next to a round pillow with the face of a winking emoji. Neither commented on the fact that Trump invited Malik Obama, U.S. President Barack Obama’s half-brother who was photographed in a pro-Hamas scarf. (In an interview later, Katsman said he didn’t know about the scarf, saying that his candidate “may be as surprised by the Hamas connection as I am.”) 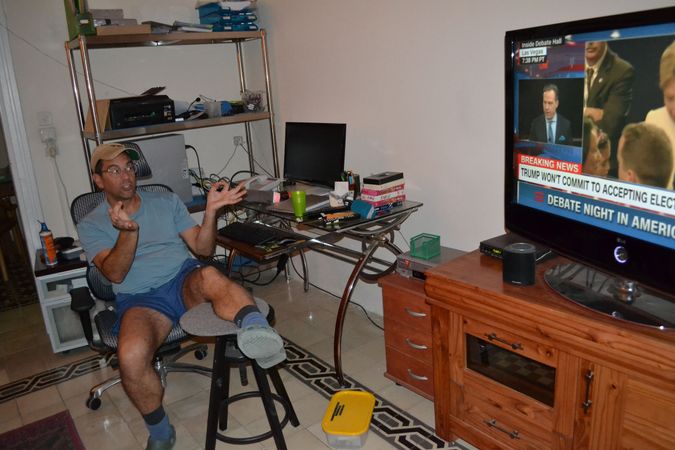 Clinton supporter Robby Berman gestures at the television during the presidential debate. Image by Naomi Zeveloff

As the debate kicked off, Berman began to needle Katsman for his support of Trump. Trump said he planned to appoint “pro life” Supreme Court justices. “Pro life, Abe? You want someone pro life?” Berman asked.

Katsman grumbled: “I want someone pro-Constitution, that means someone who knows how to read it,” but later conceded that he indeed disagreed with Trump on the issue of a woman’s right to choose.

Moderator Chris Wallace asked Trump about why he opposes limits on assault weapons and high capacity magazines. “You agree with that?” Berman demanded of Katsman. “Is there a format here?” asked Katsman, gesturing to a reporter in the room.

Soon, the two rivals united in their disdain for Clinton. The Democratic nominee mentioned a young girl she met in Las Vegas, “Carla,” “who is very worried that her parents might be deported, because she was born in this country but her parents were not.”

“She always does that,” said Berman.

“She’s met everybody,” Katsman chimed in.

“… I think we are both a nation of immigrants and we are a nation of laws and that we can act accordingly,” continued Clinton.

“Does she say even any single phrase that is not focus-group tested?” Katsman scoffed.

When Clinton steered a question about her “dream” of open borders, as quoted in a speech revealed by Wikileaks, to a discussion about how Wikileaks is abetting Russian spying, which she pinned on Trump, Berman balked:

Later, Clinton grinned on camera during a Trump attack.

“She has an annoying way of smiling whenever she is attacked,” Berman said. 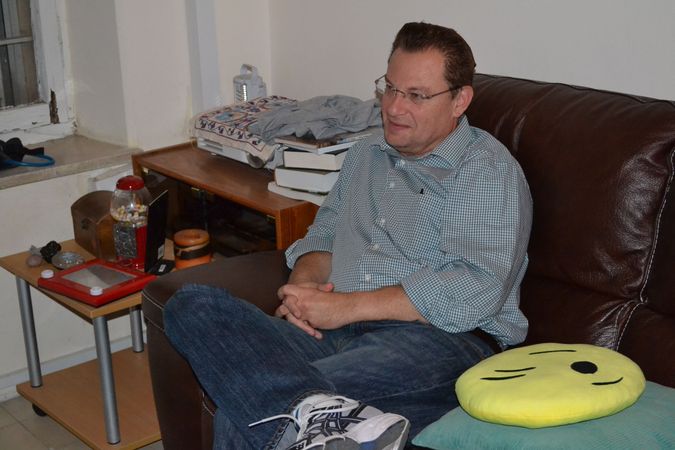 Trump blamed Clinton for the proliferation of nuclear missiles in Russia and the Middle East, to which Clinton replied that she found it “ironic that he’s raising nuclear weapons. This is a person who has been very cavalier, even casual about the use of nuclear weapons.”

Berman used it as a chance to needle is Katsman again. “You hear that?” he said. “You want this guy to have his finger on the freaking nuclear weapon?”

Berman asked again: “Would you trust Donald Trump with the nuclear codes?”

Katsman said a quiet, “Yes.” “He’s not running solo. He has an entire military and political establishment. He doesn’t just wake up one day and say, ‘I’m nuking Mexico.’”

“He could,” shot back Berman.

“So could she,” said Katsman.

Berman then brought up a more superficial point: Clinton’s all-white suit. “She looks good in that. Abe, giver her that.”

“What kind of a sexist observation is that?” Katsman joked, and then agreed with Berman: “Whatever they have pumped her full of is working pretty well.”

Later, he said that Trump looked pretty good too. “I noticed his hair was better this time.”

Clinton talked about how the economy went from a deficit to a surplus during her husband Bill Clinton’s presidency.

“What is she talking about?” asked Katsman.

Berman stared at his phone again. He held it up to show a picture of Trump kissing Russian President Vladimir Putin. “Someone put it on Facebook,” he said.

Clinton continued speaking about the economy, blasting Trump for using Chinese steel in his Las Vegas hotel. “So he goes around with crocodile tears about how terrible it is, but he has given jobs to Chinese steelworkers, not American steelworkers.”

“Can you imagine listening to this kind of hectoring for four years?” Katsman said.

Clinton talked about implementing trade agreements that would benefit American workers, to which Trump asked why Clinton hadn’t accomplished such a thing before in her decades of public service.

“I say the one thing you have over me is experience, but it’s bad experience, because what you’ve done has turned out badly,” said Trump.

Berman laughed. “Oh, that is good.”

“The problem is, you talk, but you don’t get anything done, Hillary,” Trump continued.

“He is killing her!” said Berman.

Moderator Wallace asked Trump about the nine women who have come forward with claims that he groped or kissed them without consent. But as Trump denied the allegations, Berman and Katsman were focused on Trump’s breathing.

“He’s not sniffing. Why is he not sniffing?” said Berman, referencing Trump’s conspicuous sniff at other debates.

Katsman noted that the microphone was in a different position. “This mic isn’t set to pick it up.”

Trump continued: “Nobody has more respect for women than I do. Nobody.”

Katsman chuckled at that one. Later, he said he found Trump’s degrading comments about women unacceptable but that they in no way diminished his support for the candidate.

As the debate wound down, Berman began mimicking Trump’s hand movements. Katsman opened and closed his fingers as Clinton spoke in a “blah blah blah” motion.

“Who believes this bullshit?” Berman said.

At around 5:45 AM, Berman retired to bed. Katsman stayed up to comment on a few key moments. The bombshell of the evening, when Trump refused to say if he would accept the election results, didn’t seem to phase him. “He’ll do some more whining,” he said. “There might even be litigation involved,” noting times when other candidates have challenged election results. But “civil disruption”? “I certainly don’t believe that is what he meant.”

Katsman was equivocal, saying they both did well.

Berman was more confident of the debate results. His candidate lost; Trump won.