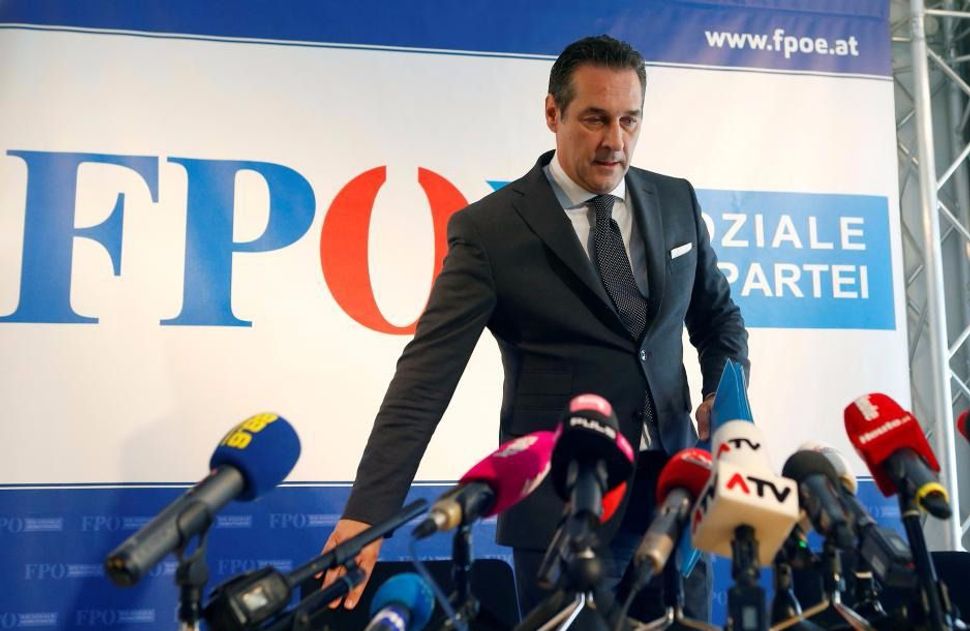 In Poland, Austria and the halls of the World Jewish Congress, among other places, Diaspora activists are raising sharp questions about the morality of Jerusalem’s foreign policy.

“We should not abandon our heritage and cut deals with the devil,” said Avi Primor, a veteran diplomat who was Israel’s ambassador to Germany from 1993 to 1996 and keeps in close touch with Europe’s Jews. In a phone interview. Primor, who is currently chairman of the European Studies department at Tel Aviv University, added, “I am afraid we are losing our ideals more and more.”

The rising concern is one that Israel’s president, Reuven Rivlin, shares, as reflected in a December 20 letter he wrote to leaders of Vienna’s Jewish community that was released earlier in January.

“We generations close to the Holocaust must be very clear that no interests of any kind can justify a shameful alliance with groups or individuals who fail to recognize responsibility for the crimes of the Holocaust,” Rivlin wrote to Viennese Jewish leaders.

Rivlin warned, too, against Israeli ties with groups that “envisage re-creating such crimes against any foreigner, refugee or migrant who dares to, in their view, ‘contaminate’ their living space.”

The letter appeared to be an implicit rebuke of recent outreach by Israeli officials to far-right parties in Europe. Among them were Austria’s Freedom Party, led by Heinz-Christian Strache.

Rivlin’s letter was also a response to a letter released publicly in November by WJC’s vice president, Ariel Muzicant, and by Oskar Deutsch, head of Vienna’s Jewish community, complaining that “certain politicians in Israel are willing to meet populist parties of the European extreme right,” including Austria’s Freedom Party. The letter beseeched Israeli leaders “to draw a very clear red line between us and those who represent hate, neo-Nazism and anti-Semitism.”

In Poland, another Israeli overture to the far right took place September 7, when Israel’s ambassador to Warsaw, Anna Azari, hosted an hour-long meeting with Father Tadeusz Rydzyk, head of Radio Maryja. The station, a Polish radio and television network, was branded by the U.S. State Department in 2008 as “one of Europe’s most blatantly anti-Semitic media venues.” In a 2011 report, Poland’s own Broadcasting Authority condemned the station for disseminating “nationalistic racism.”

According to Israel’s Polish Embassy Facebook page, Azari and Rydzyk talked about building a Polish-Jewish dialogue. Rydzyk is quoted with glowing words about his trips to Israel: “Multiculturalism is beautiful and causes great enrichment and diversity of Israeli society.”

Rydzyk later attended a Sabbath dinner with Azari in Warsaw, on November 25.

Azari declined to be interviewed for this article. But Israel’s Foreign Ministry spokesman, Emmanuel Nahshon, told the Forward in a January 7 email: “The dialogue with Father Rydzyk is important. It does not imply that we agree with him. He is a public figure, and it is important to make him realize the danger of anti-Semitic positions.”

Rafal Maszkowski of the University of Warsaw’s Center of Mathematics and Computer Science monitors Radio Maryja’s daily broadcasts as part of his work with the Never Again Association, a Polish group that combats bigotry. In a phone interview he said that the station is as bad as it ever was.

Rafal Pankowski, a co-founder of Never Again, cited a broadcast as recently as December 14, when Stanislaw Michalkiewicz, a weekly commentator on the station, told listeners: “The U.S. media and entertainment industry are dependent on the Jewish lobby. It is similar to the Stalinist terror, which was organized and implemented by Jewish communism.”

“I believe it is a moral and political mistake to enter into such an unholy alliance with Father Rydzyk,” Pankowski said at a January 1 conference on the Holocaust in Jerusalem.

Poland’s organized Jewish community of about 10,000 (estimates of the total number of Jews in Poland range up to 20,000) continues to struggle with anti-Semitism. An Anti-Defamation League study in 2015 found that 37% of Poles harbor anti-Semitic views. This compares with 16% in Germany.

In a September 15 letter to Azari, prominent Polish Jews voiced their anger about her meeting with Rydzyk. “We are dismayed,” they wrote. “His media have expressed anti-Semitic views… and granting him an audience is a step toward legitimizing his actions and his beliefs.”

The letter said that the Polish Jewish community remains skeptical of Rydzyk’s belated professed friendship with Israel, noting his failure to denounce the station’s continued dissemination of anti-Semitic programs.

“I think to be invited to the embassy, Rydzyk should have acknowledged and explicitly given up his previous anti-Semitism, but he was not asked,” said Konstantin Gebert, a Jewish activist and author, and one of the signatories.

Gebert, who helped found the Solidarity labor movement that helped to oust communism from Poland, said also that as Israel keeps moving rightward, liberal Jews are being abandoned, including Poland’s tiny organized Jewish community. According to Gebert, Poland’s far-right government is enamored of Israel, which they see as a strong, militaristic, nationalistic state that no one can push around.

“Israel is the Polish right’s wet dream,” he said in a phone interview.

One young Polish Jew, speaking on condition of anonymity because of his sensitive job, feels Israel has abandoned him by cozying up to anti-Semites like Rydzyk. He had always seen Israel as his backup plan if he wanted to leave Poland. “Israel is not my backup plan anymore,” he said. Attempts to reach Radio Maryja and Michalkiewicz for comment on this article were unsuccessful.

In the past, Primor said, it was impossible for Israeli diplomats to meet with anti-Semites. But now it’s more acceptable, he explained, because it’s seen as in Israel’s own national interests. “That’s deplorable,” he said.