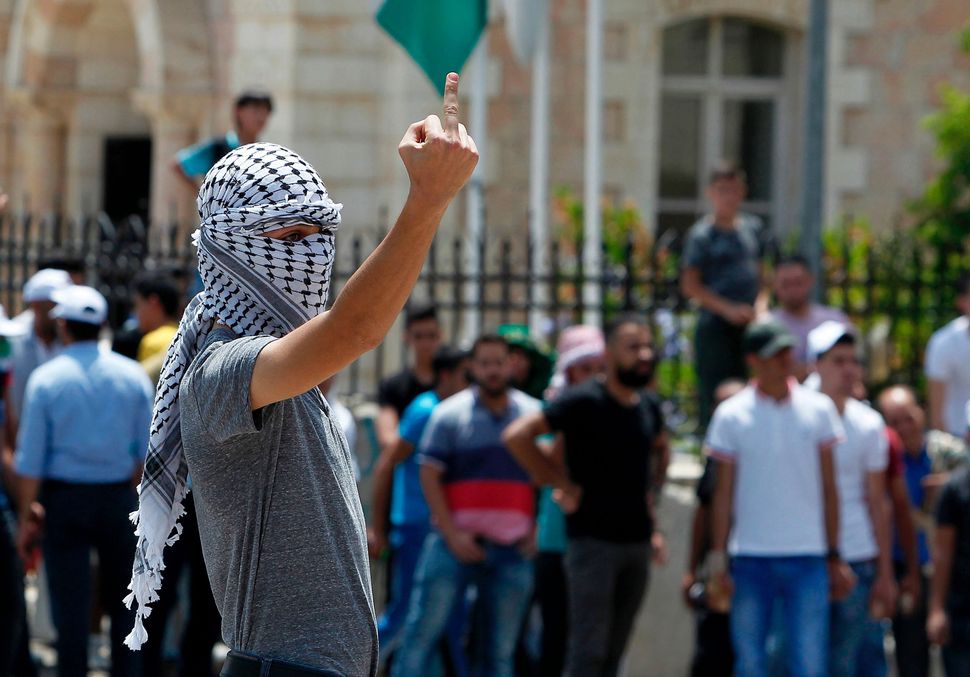 A Palestinian protester flashes his middle finger towards Israeli soldiers after Friday prayers in the West Bank city of Bethlehem on July 21. Image by Getty Images

Tensions over the Israeli decision to put metal detectors and other security equipment on a Jerusalem site holy to both Jews and Muslims exploded into deadly clashes between Palestinians and Israeli security forces in the city and the West Bank on Friday in the worst outbreak of violence there in recent years.

As simmering outrage over security measures at the entrances to the Temple Mount — Jews’ holiest site, also the location of the Al-Aqsa Mosque — reached a boiling point, thousands of Palestinians battled with Israeli security forces after noon prayers.

At least three Palestinians were reported killed and dozens wounded in sporadic clashes with police across east Jerusalem and at several locations across the West Bank. Four police officers were also wounded.

“With blood and with spirit we’ll defend Al-Aqsa,” the Palestinians chanted in Arabic, while facing off with a phalanx of Israeli riot police. They started marching toward the officers, who stood firm, backed by a water cannon-toting armored vehicle.

Earlier this week Muslim authorities had called on worshippers to attend Friday prayers at Jerusalem’s Al-Aqsa Mosque to protest the security measures, which Israel said were put in place because of an attack last week in which three Israeli Arab gunmen smuggled guns onto the Temple Mount and killed two Israeli police officers. Israel closed the site briefly afterwards in a rare response to the attack. On Sunday, Israel reopened it, but mandated that Muslim visitors pass through metal detectors, which it said were aimed at preventing additional attacks.

In response to the call for protests, Israel set up checkpoints to bar entry of Palestinians under the age of 50 to the Old City or the Al-Aqsa Mosque within. Younger Palestinian men gathered to pray in the streets outside the Old City, and Israel deployed several thousand police officers in and around the Old City on Friday morning in anticipation of violence.

Worship at the holy site proceeded largely without incident, although most of the elderly refused to enter the complex, insisting instead that the metal detectors be removed.

The security checks are “the gates of humiliation and shame,” said an official from the Islamic Waqf, the Jordanian-run authority managing the complex Al-Aqsa complex, who arrived at the scene.

“Al-Aqsa is for Muslims only,” he told the worshippers waiting outside the Al-Aqsa Mosque. “No one but the Muslims is to enter the holy Al Aqsa Mosque.”

It was a prayer protest outside the Old City in East Jerusalem that turned violent, with thousands of Palestinians, mostly young men, massed on Saladin Street, the main commercial strip. After noon prayers concluded, they faced off with the large detachment of Israeli riot police barring them from accessing the Old City.

Suddenly the crowd erupted. Some threw stones and Molotov cocktails at police, who responded with tear gas and stun grenades. Sporadic skirmishes ensued, spilling over several areas of east Jerusalem, and erupting in other locations in the West Bank, in the worst bout of violence the city has seen in recent years.

For Muslims, the site is the third holiest after Mecca and Medina, and called the Noble Sanctuary. For Jews, it’s the holiest place on Earth and the site of two ancient temples. The site is a focal point of the Israeli-Palestinian conflict and has been at the center of several outbreaks of violence.

The Waqf protested the security measures and called on the Muslim faithful not to visit the site. Palestinians accuse Israel of trying to use the metal detectors to increase Israeli control over the site, which it captured from Jordan along with east Jerusalem and the West Bank in the 1967 Six Day War.

Hamas fanned the flames Thursday by calling for a “day of rage” against the Israeli security measures. Jordan and Turkey mounted diplomatic pressure for Israel to resolve the crisis, and Prime Minister Benjamin Netanyahu convened a meeting with his security chiefs late Thursday night to discuss removing the metal detectors. By morning, however, they remained in place.

Mass protests also took place in Istanbul, Amman and several other Muslim countries over the renewed clashes over the Temple Mount.

The cobbled streets of the Old City, normally bustling with tourists, locals and worshippers of different faiths, were mostly empty on Friday morning. Police officers manned street corners in the Muslim Quarter.

Jessie and Tom Macmillan, both Presbyterian pastors from Cleveland, Ohio, had the Via Dolorosa almost to themselves this morning head of the outbreak of violence. The mood in the Old City was tense, they said. A day before Tom visited the Temple Mount, and said it was “strange” being there without any Muslim authorities or visitors at the site.

Ilan Ben Zion is a freelance writer based in Israel. He has worked as a reporter at the Associated Press and a news editor at The Times of Israel.