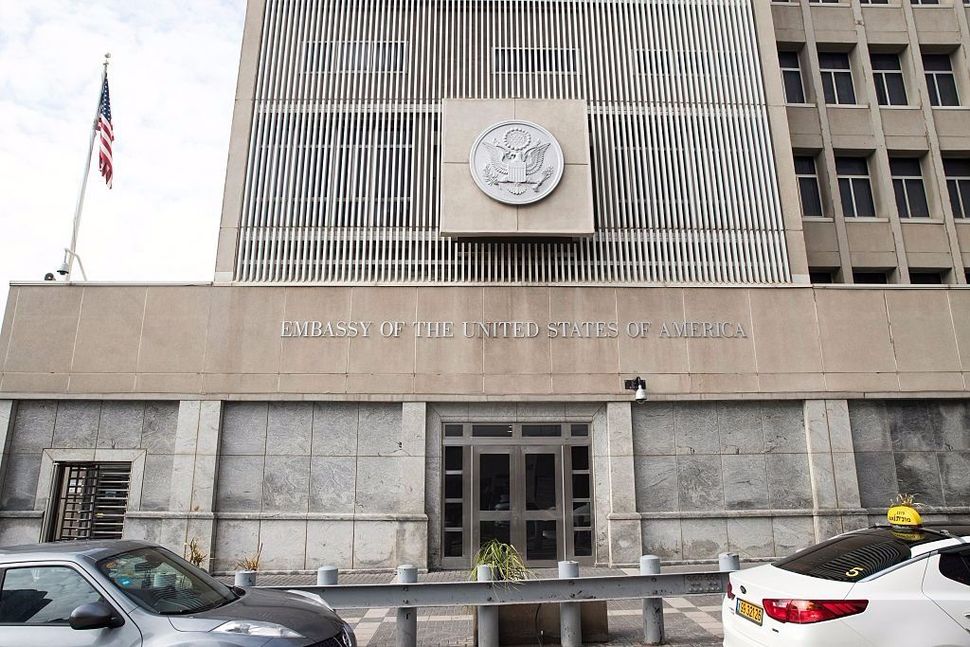 Addressing his audience on the daily “700 Club” on the Christian Broadcasting Network, veteran televangelist Pat Robertson celebrated President Donald Trump’s decision to recognize Israel as the capital of Israel.

“In the Six Day War Jews finally took sovereignty over Jerusalem and its absolutely crucial in terms of biblical prophecy that they maintain control over that,” he said. “Remember, you go in favor of breaking up Jerusalem, you’re gouging against the direct word of Jesus. God is not going to let anyone break that. It’s going to be a major battle, it will be over Jerusalem.”

The battle over America’s recognition of Jerusalem as Israel’s capital was hardly biblical; no fire was seen or brimstone sniffed. But Christian activists led the charge against the Trump White House, demanding that he fulfill his campaign promises, with Orthodox Jewish groups at their side. Big-tent Jewish Zionists supported the campaign silently, from the sidelines.

“It was never a top priority on the Jewish community’s agenda,” said a long-time activist in a Jewish advocacy group who asked not to be identified in order to speak freely about the biggest American-Jewish Israel lobbying group, the American Israel Public Affairs Committee. “Everyone always wanted the embassy to move to Jerusalem, but it never made it to the top three.” These top three lobbying issues usually related to countering Iran’s nuclear ambitions, ensuring U.S. aid to Israel, and curbing Palestinian demands from Washington.

AIPAC signaled its support for the move, but didn’t mobilize donors or members.

For evangelical groups, on the other hand, Jerusalem is an inspiring call to action.

“I can assure you that 60 million evangelicals are watching this promise closely because if President Trump moves the embassy into Jerusalem, he will historically step into immortality,” Pastor John Hagee, leader of Christians United for Israel told Fox News “He will be remembered for thousands of years for his act of courage to treat Israel like we already treat other nations.”

CUFI, a pro-Israel Christian group that reaches millions of supporters, has called for Trump to recognize Jerusalem and relocate the embassy in events it holds across the nation and in lobbying meetings on Capitol Hill and with the executive branch. Republican mega-donor Sheldon Adelson, one of CUFI’s key benefactors, has the same.

Back in May, Axios reported that Adelson was “furious” over statements by Secretary of State Rex Tillerson in which he argued that moving the embassy could harm the Israeli-Palestinian peace process. Adelson made clear, according to the report, that he “doesn’t buy the argument,” and that “Palestinians are impossible negotiating partners.” A well-placed source in the Jewish community told the Forward that Adelson raised the issue with Trump repeatedly in their meetings and conversations before the elections and after Trump took office. His main ally promoting this call was Steve Bannon, Trump’s former top strategist, who famously put relocation of the embassy on his whiteboard to-do list.

Vice President Mike Pence, has served as Christian Zionists’ main channel to the White House; he took calls from evangelicals and emerged as the most significant force in the Trump administration bent on advancing Wednesday’s declaration on Jerusalem. Pence has served in the past 10 months as the administration’s de-facto envoy to the Jewish community, holding meetings and events with Jewish and pro-Israel groups and recently representing the White House at a New York event celebrating the 70 year anniversary of the UN partition resolution which led to Israel’s independence. It was there that Pence hinted at a possible change in policy toward Jerusalem when saying that Trump is “actively considering” when and how to move the embassy.

In the Jewish community, the Orthodox Union and the hawkish Zionist Organization of America formed the tip of the spear. The ZOA, also funded by Adelson, had been actively calling out both Democratic and Republican administrations for signing presidential waivers postponing relocation of the embassy. The Orthodox Union has consistently raised the issue of Jerusalem in speeches and advocacy meetings.

AIPAC mostly sat this one out.

The group was behind the 1995 law demanding the U.S. move its embassy from Tel-Aviv to Jerusalem, although it also supported softening the language by including the option for a presidential waiver in the law. “The government of Israel, despite its well-known misgivings, had to support the effort publicly,” recalled Neal Sher who was AIPAC’s executive director at the time, who stated that since, pro-Israel activists were reluctant to take action to ensure the law is enacted. “Either get serious about the embassy and launch a full-scale push to make it happen, or put it aside,” Sher wrote in a 2007 column.

While not elevating the Jerusalem issue to a top lobbying priority, AIPAC remained committed to the issue. Over the summer, AIPAC lobbied Congress to pass a resolution “commemorating the 50th anniversary of the reunification of Jerusalem” during the 1967 Six Day War. This resolution, which was mentioned by Trump in his speech Wednesday, included a reaffirmation of the 1995 Jerusalem Embassy Act, and a call for “the President and all United States officials to abide by its provisions.”

Marshall Wittmann, AIPAC’s spokesman, said in a statement to the Forward that “AIPAC has long supported and advocated for moving the U.S. embassy to Jerusalem, and recognizing that city as the capital of Israel.”

Now, however, all sides except the Jewish left are in celebratory mode, commending Trump for the move, while trying, for most, to remain non-partisan.

J Street issued a statement condemning it as premature in the absence of a two-state solution.

The Reform movement did, as well.

For Israel, which back in 1995 was skeptical about the law, it is now time to embrace Trump, once again. Speaking at a Hanukkah celebration hosted by the Israeli embassy Tuesday night, ambassador Ron Dermer compared Trump’s courage to that of the Maccabees, and said recognition of Jerusalem as Israel capital would make Trump “take an honored place alongside President Truman who recognized Israel’s independence almost 70 years ago.”