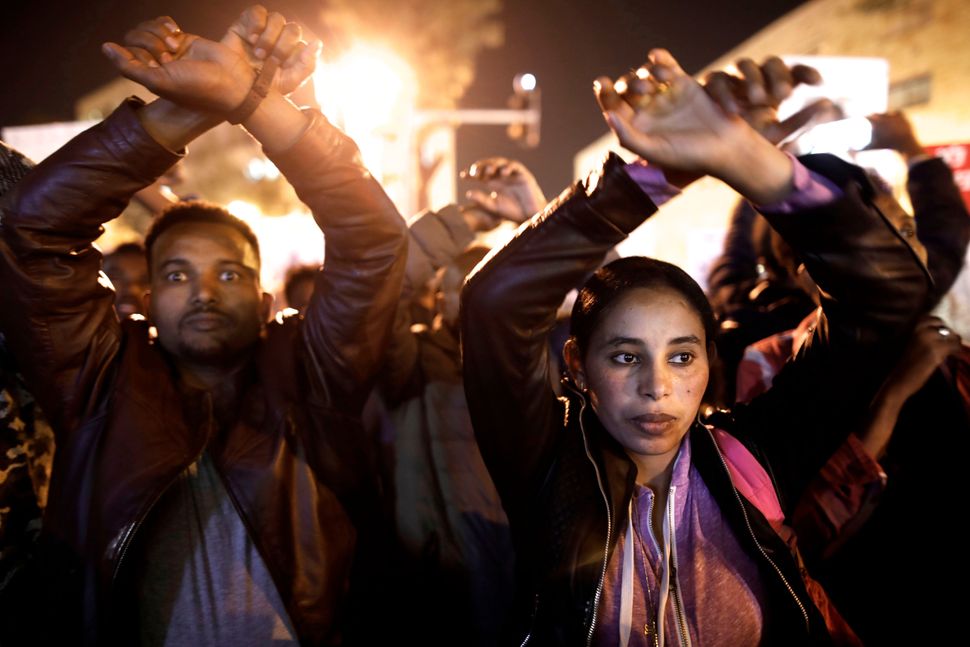 (JTA) — When Israeli Prime Minister Benjamin Netanyahu walked back an agreement with the United Nations last week to resettle abroad at least half of the African migrants seeking asylum in his country, it did not play well with the majority of Israelis.

But don’t assume that means the public wants the migrants to stay in Israel, pollsters warn. While most knocked Netanyahu for a lack of leadership, the Israeli public overwhelmingly rejects the idea of granting residency to all or most of the migrants.

“They are not ready to have 40,000 people being recognized,” said Tamar Hermann, the academic director of the Guttmann Center for Public Opinion and Policy Research at the Israel Democracy Institute, which has done surveys on the issue.

Hermann was referring to the 40,000 or so Sudanese and Eritrean migrants who have made their way to Israel, often to South Tel Aviv. While nongovernmental organizations in Israel and Jewish and civil rights group abroad consider them refugees, opponents regard them as “infiltrators” who came to Israel for economic reasons, not fleeing persecution.

Israelis also ask why it is their responsibility to solve problems originating in Africa, and question the economic and social impact of absorbing the non-Jewish migrants.

Over 70 percent of Jewish Israelis are against granting the migrants residency, Hermann estimated. However, in that group some support granting residency to those of the migrants who qualify for official refugee status — but under the assumption that the number of recognized refugees will be small, she said.

Hermann said it is hard to estimate how many of the group would actually qualify as refugees.

Those two groups oppose the asylum seekers for different reasons. The South Tel Avivians say the migrants who have moved there have brought crime and significantly deteriorated conditions in the low-income neighborhood.

One such activist, Mai Golan, told the Israeli news site Walla that the situation in the neighborhood was “unbearable.”

“It’s not the situation five years ago, it’s worse,” Golan said. “The foreigners raised their noses, they got confidence and they enjoy the aid organizations that surround them. They talk to us inappropriately; the fear in the street increases.”

Those who are part of the religious Zionist camp oppose settling the migrants for ideological reasons. They believe that as a Jewish state, Israel’s responsibilities do not extend to the non-Jewish migrants, Hermann said.

In January, the Ashkenazi chief rabbi of Israel, David Lau, defended the government’s announced plan to deport the migrants — originally scheduled to be implemented this month — by distinguishing between refugees and economic migrants.

“We have many people in the State of Israel who need to be cared for – citizens of the state,” he said. “I’m thinking of the disabled, whom we aren’t always able to support; the Holocaust survivors living amongst us – including some in disgraceful conditions. And I’m also talking about the residents of South Tel Aviv.”

“Aside from all that,” Lau said, “we have to distinguish between refugees and people looking for work.”

Hermann said that between a fifth and a quarter of Jewish Israelis are on the left on the issue, meaning they agree a solution must be worked out that will allow migrants to stay or that ensures their safety if they are sent elsewhere.

But among progressives there is also a split, with some in support of allowing all the asylum seekers to stay in the country, regardless of whether they meet the international standards for refugee status, and others saying only those who can be classified as refugees should be allowed to stay.

Rabbi Susan Silverman of Jerusalem has drawn comparisons to Jewish history, including Jews facing deportation to concentration camps during the Holocaust, in her advocacy work on behalf of the migrants.

“People risked their lives to save Jews, and we as a country are now saying we don’t want to risk the tiniest demographic shift?” she told Haaretz.

When the migrants were facing threats of deportation, Silverman helped lead an initiative urging Israelis to shelter the asylum seekers in their homes.

Hermann said the debate is not only about the fate of the migrants, but also touches upon a larger question in Israeli society.

“The struggle is not only about these 40,000 people,” she said, “it’s about is Israel a liberal democracy acting along the lines of international law or the code of conduct of liberal democracies — or is it another kind of a country, for Jews and therefore those who are not Jewish should not be allowed to stay here for a longer period of time unless they have a very good reason.”

Meanwhile, Netanyahu earned scorn for what even in Hebrew is described as a “zigzag” on the U.N. deal that would have granted refugee status to about half the migrants and resettled the rest in Western countries.

Fifty-six percent of Israelis described his move as “very bad” or “bad,” according to a poll by Israel’s Channel 10. Another 23 percent described his handling of the agreement as “fair” and only 10 percent said it was “very good,” with the rest saying they were not sure.

Hermann said the decision was viewed “very negatively” even among those who had criticized Netanyahu for the agreement because it was seen as an example of bad leadership.

“People are wondering how does he make his decisions, why didn’t he consult with his coalition partners earlier on,” she said. “They see it as a negative sign of his ability right now to deal with strategic issues.”

The post Israelis want a solution to the African migrants crisis, though few want them to stay appeared first on Jewish Telegraphic Agency.