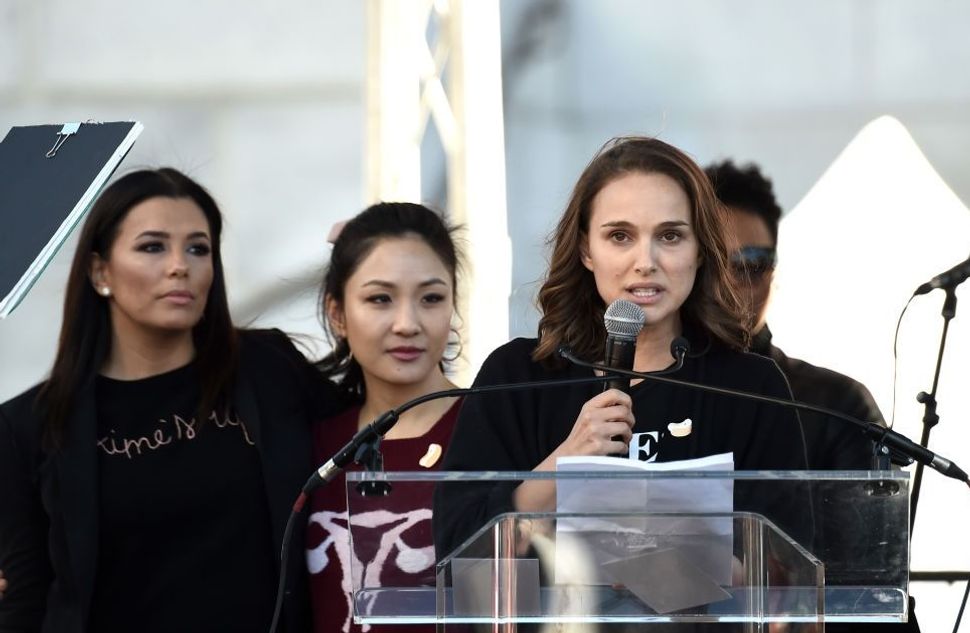 For Andrew Goldblatt, a junior at Tufts University, Natalie Portman’s decision not to attend an awards ceremony to protest Prime Minister Benjamin Netanyahu’s policies signals a potential turning point in the discourse on Israel for young American Jews.

“It certainly feels like a new moment for such a prominent and proud Israeli to take the stance she is taking,” says Goldblatt of the Oscar-winning actor, who was born in Israel and has close ties with the country. She announced last week she would not be attending the Genesis Prize Foundation awards ceremony due to the presence of Netanyahu, despite being named its 2018 laureate.

Goldblatt says the mantle of legitimacy she lends will embolden young American Jews – specifically fellow progressive Zionists like himself – to feel more comfortable speaking out against Israeli policies that they too find objectionable.

It will also enable them to say, as Portman did in her statement, that you can be critical of the leadership in Israel without wanting to boycott the country. That she cited her “Jewish values” as the basis for her objections was key, Goldblatt notes.

“She’s asking the Israeli government to act in line with our values, and that felt really empowering,” says the 21-year-old Judaics major from Chicago, who represents New England on the board of J Street U (the college student group of the pro-Israel, pro-peace U.S. advocacy group).

“It almost felt cathartic to read,” he adds.

Many college students say they thought Portman’s statement was tapping into the Zeitgeist of a young generation of progressive Jews who are pushing back against the expectations of mainstream elements in the American-Jewish community that they defend the actions of an Israeli government that is increasingly right-wing – even when it goes against the liberal politics they espouse at home in the United States.

“She is emblematic of a new generation of young Jews confronting the occupation, and I think she will be among a long line of young people taking a stand,” says Noah Wagner, 21, a senior at Harvard and member of IfNotNow, a movement led by young Jews which seeks an end to American-Jewish support for the occupation.

Some even compare the struggle they are fighting against President Donald Trump to their speaking out against Netanyahu’s hard-line approach to the Palestinians. This includes the recent “live fire” orders on demonstrators in Gaza and his government’s plan to deport some 38,000 African asylum seekers.

“Most American Jews find the actions of the Trump administration to be horrifying. We would be wrong if we failed to notice the same patterns and practices in Netanyahu’s government,” says Zoe Goldblum, a senior at Stanford and president of J Street U’s national board.

She cites “rampant” deportation efforts, as well as “antidemocratic stances toward dissent and the free press. Just as our community has played an important role in speaking out against the violence and racism of the Trump administration, Natalie Portman’s statement challenges us to recognize those same dynamics in Israel and to speak out about them,” Goldblum says.

Portman, who speaks fluent Hebrew, has relatives and friends in Israel, and directed and starred in the film “A Tale of Love and Darkness” (based on Israeli writer Amos Oz’s memoir), is one of the world’s most high-profile Israeli citizens. She was born in Jerusalem to an Israeli father and American mother, but grew up in New York.

In Washington, Jill Raney, 33, who prefers a gender-neutral pronoun, says they hope Portman’s statement will help them combat those who criticize Raney’s own activism on behalf of IfNotNow.

“Someone as famously supportive of Israel as Natalie Portman joining me in criticizing Israeli policy that violates our Jewish values might help those who have called me a self-hating Jew to understand that I oppose the occupation because I care so much about the Jewish people,” Raney writes in an email.

“I think it’s a symbolic way to use her power and visibility,” says Nathanson. “Far too often in the American-Jewish landscape, the viewpoint she is representing is not openly represented – and that is the progressive-Zionist position of love for and commitment to Israel, while strongly objecting to the actions and policies of Netanyahu and his government.”

Rachel Yakobashvili, a sophomore at George Washington University in D.C., has a similar outlook. “It’s wonderful to see such an influential Jew, especially one born in Israel, be critical of human rights violations and to abstain from being used as a puppet for political or other types of agendas,” she says. “I think she can be someone who sways those who struggle to support Israel’s right to exist, while still being liberals who believe in respecting human rights.”

Not all self-described liberal and left-leaning Jews back Portman’s tactics, even if they did agree with her actual message, says Ben Gladstone, a senior at Brown University in Providence.

“Personally, I am less likely to critique Israeli policies as a result of Natalie Portman’s example,” he tells Haaretz.

Gladstone, 21, who is double majoring in Middle Eastern and Judaic Studies, takes issue with the actor’s decision not to accept the Genesis Prize in person in Jerusalem. The prize is a $1 million award to causes of the winner’s choosing (although in Portman’s case, another benefactor, Morris Kahn, had added another $1 million).

Gladstone says the way Portman’s statement was “appropriated” by those critical of Zionism – including activists in the boycott, divestment and sanctions movement – made him think what she did was a mistake.

Life on American campuses in the age of BDS can be a stressful place for progressive Zionists, who care deeply about Israel and support its right to exist, but strongly object to some of the actions and policies of Netanyahu and his government.

Gladstone notes: “On American college campuses today, it is much easier to criticize Israel from a non-Zionist place or to call for the destruction of the Jewish state – and I know Portman has done neither of those things – than it is to speak out in support of Israel’s right to exist.

“I think most liberal/leftist American Jews would have gone to Israel and would have spoken there about both our appreciation for Israel and our critiques,” he tells Haaretz.

“It is a signal to leftist, American-Jewish Zionists like me that speaking out against Israeli policies with which we disagree is dangerous to Israel as a whole,” states Gladstone. “By blurring the line between critical Zionism and destructive anti-Zionism, BDS and IfNotNow have turned Natalie Portman’s statement into an opportunity to further polarize the Israel/Palestine debate,” he adds.

Gladstone and the other students say they were taken aback by the attacks on Portman by several right-wing Israeli lawmakers. One former minister said her comments bordered on anti-Semitism, while a lawmaker even called for her Israeli citizenship to be revoked.

“If Israeli lawmakers think Natalie Portman’s comments approach anti-Semitism, they must have never visited American campuses or seen the real BDS – and they also must not be paying attention to American politics,” says Gladstone. “Israeli lawmakers do have an obligation to call out anti-Semitism in the United States and around the world, but they should focus their energies on real anti-Semites like Wayne LaPierre [executive vice president of the NRA], Viktor Orbán, and Louis Farrakhan, not on progressive Zionist Jews like Natalie Portman,” he adds.

Goldblum at Stanford, though, has a different take on the Israeli attacks on Portman. “We need to look no further than the backlash Ms. Portman is experiencing to understand why young American Jews like me believe that the current Israeli government is endangering its own democracy, and thus its future,” she says.