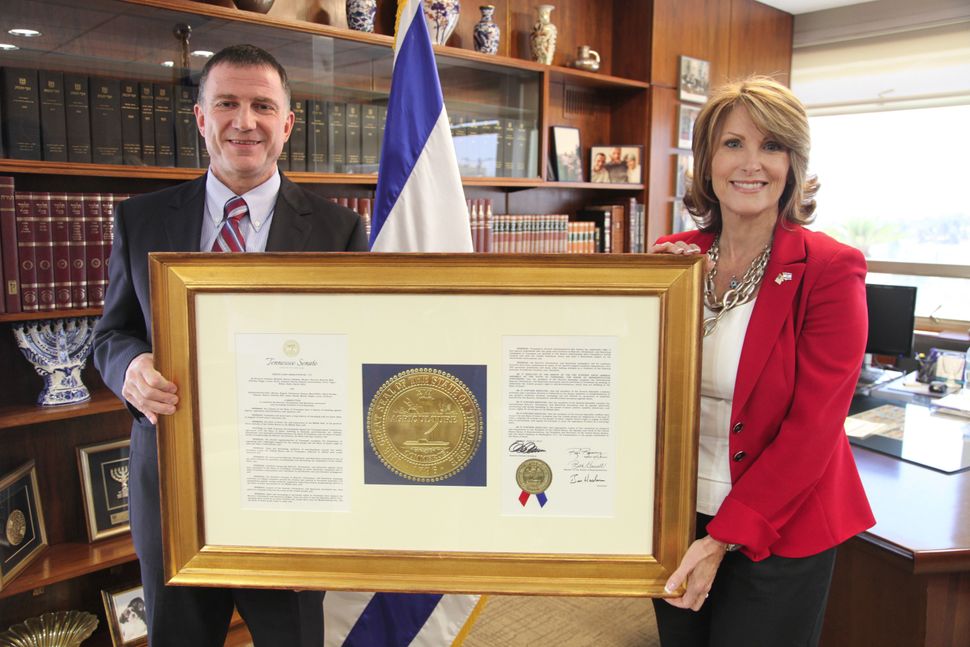 The Israeli government approved a grant to a Tennessee-based Christian Zionist organization that is on the Southern Poverty Law Center’s watch list of hate groups, according to a government spreadsheet acquired by the Forward.

The document showed a transfer of $40,000 to a group called Proclaiming Justice to the Nations, which has lobbied to pass laws preventing state agencies from working with groups that support the Boycott, Divestment and Sanctions movement against Israel, and has recently been active in mobilizing Christian Zionists in South Africa, a prime target of Israel’s public-diplomacy efforts.

Asked about the grant, the group denied that it had received any money from the Israeli government or from Concert, a company funded by the Ministry of Strategic Affairs. A ministry spokesperson declined to speak about PJTN specifically, but shared a three-sentence statement saying that the government’s activities “are done in a legal and professional manner.”

The document was released this summer after Israel’s new coalition government appointed a different ministry leader, who dropped the bureau’s longstanding stance of rebuffing public-records requests from reporters. The grant to PJTN was part of a broader push by the ministry to support pro-Israel groups fighting BDS in the United States, which has raised questions about whether those groups properly disclosed the support they received from foreign entities.

The documents show that the ministry and an affiliated quasi-governmental company, called Concert, gave American pro-Israel organizations a total of more than $6.6 million since 2018, using both Israeli taxpayer money and designated private funds. Click here to read The Forward’s full investigation.

Based outside Nashville, Proclaiming Justice to the Nations was the driving force behind the Tennessee legislature becoming in April 2015 the first state to pass a resolution condemning BDS, and successfully lobbied other states to pass anti-BDS laws. It is also the leading local group backing a new bill that would change Tennessee’s civil rights code to define antisemitism in a way that includes anti-Zionism.

PJTN, whose annual revenue was $1 million in 2018, the latest year for which records are available, has hosted several notables of the pro-Israel right at events, including former Arkansas Gov. Mike Huckabee and radio host Dennis Prager.

But its founder and president, Laurie Cardoza-Moore, is also known for her incendiary Islamophobic rhetoric. She has said that 30% of American Muslims are terrorists, that Islam is a “political system of global domination,” and that former President Barack Obama literally caused tornadoes when he announced his support for a Palestinian state.

The SPLC has said since 2017 that Proclaiming Justice to the Nations is an anti-Muslim hate group, and last year Amazon removed the group from its charity donation program as part of a purge of extremist organizations.

Despite this history, Israel approved a payment of $40,000 on Jan. 8, 2020 to “Laune Cardza Moore” with the subject line “Support for the organization PJTN for the event: Our Shared Biblical Connection to the Holy Land.” (The misspelling of Cardoza-Moore’s name in the spreadsheet was in English, while most other entries were in Hebrew.)

PJTN had hosted events with that title in November 2019 at churches in Johannesburg and Cape Town. The group had opened its first chapter in South Africa five months earlier.

The Johannesburg event was co-sponsored by the South African Zionist Federation, and Cape Town by International Christian Embassy Jerusalem – two other foreign groups that have received funding from either the Ministry of Strategic Affairs or Concert, other documents show.

American advocacy groups that receive money from foreign governments have to disclose those payments with the Department of Justice under a law called the Foreign Agents Registration Act, though there is an exemption for money spent on activities outside the United States.

PJTN is not listed in the Justice Department’s online FARA registry. Incomplete compliance with the registration rules is punishable by up to five years in prison and a $250,000 fine.

If the entire $40,000 grant was spent on the South African church events, PJTN would likely not have to register, experts on the law said. But if the money was spent on doing prep work or recruitment for those programs at the group’s Tennessee headquarters — or on lobbying the Tennessee legislature to pass the antisemitism legislation — they likely should have registered, the experts said.

But PJTN insisted it never received any Israeli government funds at all, despite being listed in the ministry’s internal financial statement.

“As a United States 501(c)(3) non-profit organization, our financials are 100% transparent and available to the public,” the group said — though its federal tax filing for 2020, the year the documents show the payment approved, would not generally be available until 2022. “We remain steadfast in our mission to educate Christians worldwide of their Biblical responsibility to stand with Israel and the Jewish people in the face of global anti-Semitism.”

South Africa — which has not had an ambassador to Israel since 2018, and where several leaders of the ruling African National Congress party have compared Israel to their country’s former apartheid regime — is one of Israel’s top public diplomacy targets, said Yotam Gidron, the author of “Israel in Africa” and a PhD student at Durham University in England.

There, he said, “the support of Evangelical Zionists has been very crucial for Israel, not least because otherwise its political leadership is highly critical of it.”

In March, a group called Jerusalem Prayer Breakfast, which is led by right-wing Knesset member Robert Ilatov, held another event aimed at South Africa’s Christian Zionists, in the Free State province. Israel’s ambassador to South Africa, Lior Keinan, attended this breakfast, whose keynote speaker was the Rev. Kenneth Meshoe, a member of the South African parliament and the leader of the African Christian Democratic Party.

(Meshoe had traveled to Israel three months earlier for a conference organized by the Israel Allies Foundation, an American group deeply involved in the anti-BDS legislation that also received funds from Concert, according to the newly released documents.)

The prayer breakfast turned out to be a coronavirus superspreader event, Middle East Monitor reported, likely linked to one of the organizers, Albert Veksler, who came to the event from Israel.

According to South African government statistics cited by Middle East Monitor, the Free State had zero COVID-19 cases on March 10, the day of the breakfast, but by March 31 had 74 — 67 of whom, including Meshoe, either attended the breakfast or was in contact with someone who did.

Meshoe also appeared in a 2016 anti-BDS documentary called “Boycott This!” produced by Cardoza-Moore of PJTN. She held a public screening of the film in Johannesburg during her November 2019 trip to South Africa for the “Shared Biblical Connection” events.