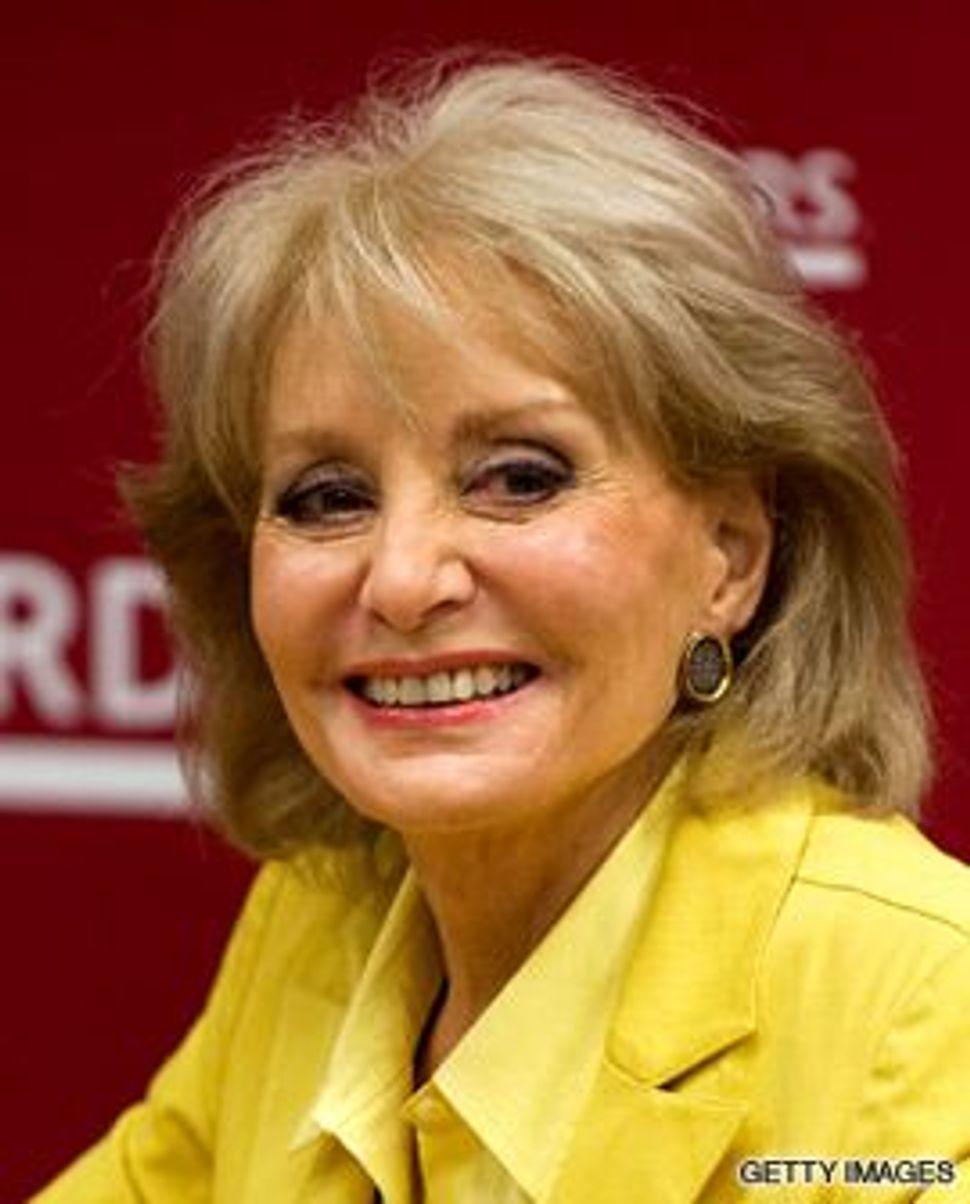 The Queen Bee of American TV interviewers has opened up about her Jewish background and impressions of the Middle East’s most influential leaders.

In an interview published today in Yediot Aharonot, Barbara Walters describes the late Israeli foreign minister Moshe Dayan as a “brilliant and extraordinary” man, and says she wishes she could catch up socially with Rachel Dayan, his wife, more often.

The veteran ABC newswoman said one of her greatest political interviews — a joint Q&A with Israeli Prime Minister Menachem Begin and with Egyptian President Anwar Sadat — was actually Begin’s idea, and that Sadat agreed only after the Israeli leader “personally requested” it during Sadat’s 1977 visit to Jerusalem.

Other interviews in the region had a less amiable feel, Walters said, recalling how conversations a few years earlier with Sadat, Yasser Arafat and Yitzhak Rabin had to be broadcast on different nights as a precondition for the interviews.

Arafat in particular could be a challenge: Walters remembers the PLO leader without affection, recalling his “habit of saying one thing to American journalists and something completely different to his people, the Palestinian people — though I never let out my anger or dissatisfaction during interviews with him.”

Born to non-practicing Jews in Brookline, Mass., Walters said she “never had a desire to travel to Israel” but found the country “amazing” when she arrived there on business. “Many people in the world would change their minds about Israel if they were to visit, to experience its tiny size and understand the region in which it’s located. When you look at a map, you don’t have an understanding of the reality,” she said.

Speaking of maps, if Walters could sit down with Iranian President Mahmoud Ahmadinejad, she’d “present him with 10 facts about the Holocaust and ask him to respond,” she said. “If he said he wanted to wipe Israel off the map, I’d ask him how he wanted to erase an entire nation, millions of women and children.”

Although she’s racked up decades of experience, Walters is not necessarily a great interview herself, Yediot Aharonot writer Yaniv Halili noted. “She tends to answer questions with questions,” he reports, “despite the fact that she, the queen of interviews, knows that nothing is more annoying.”